When Faced With Competition, Duck Penises Get Weird(er) 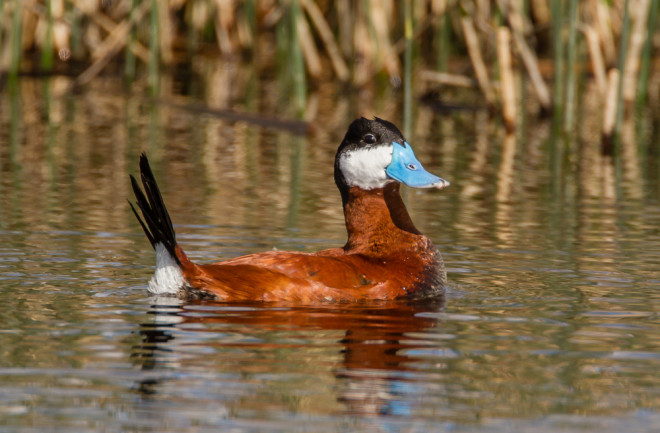 Is he one of the lucky ones? (Credit: Shutterstock/Herman Veenendaal Dating is a tough game. No matter where you go, it seems like there's always someone who's more attractive, funnier or remembers to shower. Losing out sucks, but hey, at least you get to keep your penis. Not so for ruddy ducks. They only grow penises during mating season, and when forced to compete for mates, the scrawnier ducks don't even bother to put in much effort. Some ruddy ducks can grow penises that measure up to seven inches in length, but the weaker among them seem to put off sexual maturity, sprouting just a nub when mating season comes around and opting to save their energy for more important tasks.

Researchers from Mount Holyoke College conducted a study of ruddy ducks and another species, the lesser squap. They put male ducks of each species in one of two situations during mating season: They were either penned alone with a female, or in a more intense environment with many competing males. The results were published in The Auk: Ornithological Advances. In both species, the more dominant ducks grew larger penises, but the difference was much more pronounced among the ruddy ducks. While the "lesser" lesser scaups grew smaller penises, in the first year of the experiment, the smaller ruddy ducks grew next to nothing at all. The next year, they seem to have gotten a confidence boost: the ducks grew penises, but they still disappeared much more quickly than normal. The first year of the experiment involved ducks that were just on the cusp of reaching sexual maturity, and it seems that those who felt at a disadvantage chose to put off mating for another year.

The variable nature of genital growth in the ducks seems to come down to social factors. In ruddy ducks especially, mating is a competitive game. Come breeding season, males sport colorful chestnut plumage and bright blue beaks, and engage in elaborate courtship displays. In addition, they can be extremely aggressive toward each other when fighting for mates. The energy expenditure and risk of injury might not be worth it for smaller ducks. This could also explain why smaller ducks kept their penises less than half as long as larger ducks — in ruddy duck society, having a penis makes you a target. This is just one of the ways the sexual arms race plays out among ducks. Other species are famous for having oddly long, corkscrewing penises that grow explosively (not for the faint of heart) when it's time to mate. The convoluted growth is an adaptation to the labyrinthian female duck vagina, which can contain dead ends, allowing them to better choose who they want to mate with. Indeed, at up to seven inches ruddy duck penises are sometimes longer than their bodies. “I can’t imagine they could grow any longer,” says study lead author Patricia Brennan, speaking to Nature.