When Caterpillars Attack, Tobacco Plants Use Their Own Spit Against Them 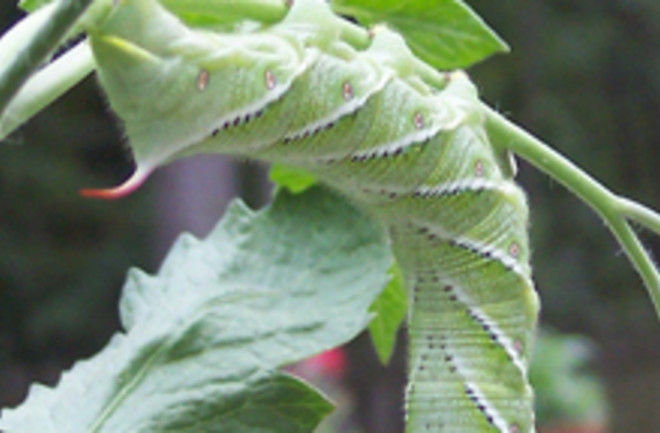 If you're a tobacco hornworm caterpillar, your own spit can come back to bite you: That plant you tried to eat for dinner can use your own saliva to summon larger animals that might like to make you their dinner. According to a study in Science, the tobacco plant has evolved a clever defense against hungry insects—it calls in the insects' predators for help:

When a leaf is wounded, plants immediately release a "bouquet" of distress chemicals known as green leaf volatiles (GLVs) into the air. GLVs are formed when long fatty acid chains in the cell membranes are chopped up into six-carbon molecules as a result of damage. These molecules can exist in two different shapes, or isomers, depending on the position of a double bond between two of the carbons [The Scientist].

"In effect, the caterpillar calls the police on itself," says Baldwin [New Scientist].

To be more specific, Baldwin's team found that those two isomers are responsible for the difference.

There is an energy barrier between the (Z)- and (E)-isomers, so some sort of catalyst is required for the chemical transformation to occur. Thus, something unique to the bite of the tobacco hornworm induces a rearrangement around the double bond of GLVs [Ars Technica].

For more about the tobacco plant's tricks, check out our previous

80beats: How the Tobacco Plant Outwitted the Hawkmoth

, on how they call for help DISCOVER: The Clever Tricks That Let Caterpillars Reach Butterflyhood