When a Supervolcano Erupted, These Ancient People Survived the Blankets of Ash

An eruption in Sumatra might have made life more difficult in modern-day India, but it probably didn't wipe out all residents. 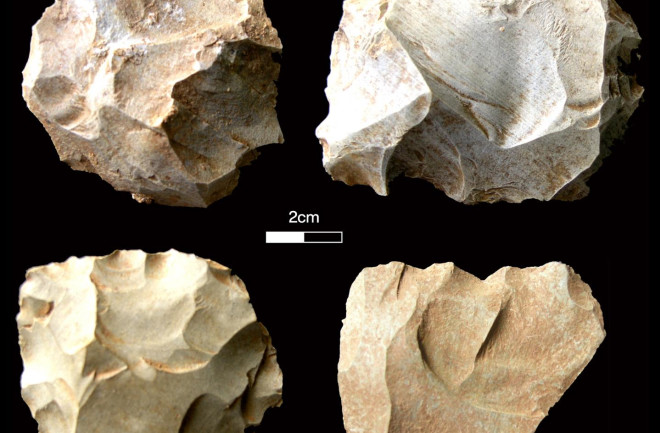 About 74,000 years ago, a volcano in Sumatra erupted, smothering its corner of the globe in debris and dust. The blast was the biggest volcanic eruption in the last 2 million years. For a long time, researchers thought its fallout would have wiped out most of the human life in the broader region — including modern-day India.

If the eruption had made life nearly impossible in early India, then records of human activity, like stone tools, would have transformed dramatically after the explosion as survivors adapted to their new conditions. But excavations in India show that the people who lived there during the eruption managed to keep going after the ash settled.

Stone tools embedded in dirt older than the eruption matched those found in deposits after the eruption, according to new research out in Nature Communications. “Those stone tools were identical — they didn’t change at all,” says Michael Petraglia, a study co-author and archaeologist at the Max Planck Institute for the Science of Human History.

These new excavations back up the growing evidence that the Sumatra eruption wasn’t as life-threatening as scientists used to believe. And the tools themselves look similar to what early Homo sapiens were producing in Africa — which could indicate that humans in India moved into the continent earlier than some anthropologists think.

Several years ago, other researchers digging in the Middle Son Valley identified ash from the Sumatra volcano. When looking at a crosscut of the land, the deposit is visible from afar, Petraglia says: It’s a white strip running through reddish brown sediment. This north-central region in India is also rich in fossils and other remains. Petraglia and his team were curious if they’d find artifacts from early humans in the region too. “Lo and behold, we found artifacts eroding out of these red and brown sediments,” he says.

Excavations several hundred feet away from where the ash lies revealed several dozen stone tools, found in increasingly deeper levels of dirt. Though there was no ash sediment mixed in with the finds, the team drew parallel lines to where the white streaks lie in the nearby landscape. Seeing what was in the dirt before and after the ash helped the team conclude that the explosion didn’t stop human activity in the region. Instead, people continued on, making the same tools they had been making.

The analysis backs up a similar concept that Petroglia and his team had proposed in 2007 — to much controversy. "Since writing that, we’ve been debating ever since,” Petroglia says. “And this reinforces what we’ve said for 10 years."

Learning From Your Relatives

Additionally, these Son Valley finds more closely resembled the designs of those made by early H. sapiens still in Africa than those made by European Neanderthals. To Petraglia, this coordination — combined with the fact that some of the excavated tools are older than the eruption itself — supports the idea that early humans moved out of Africa in more than just one wave 60,000 years ago.

Archaeological remains are most of what the region has to go on when it comes to spelling out their early history. Human fossils are hard to find, and they’re exceedingly rare in Asia, Petraglia says. He also acknowledged that the genetics of modern-day populations also don’t show evidence of a super-early wave of human migration into the area.

For now, Petraglia plans to look in Sri Lanka for more fallout of the Sumatra explosion. Maybe remains from other surrounding regions will also support the possibility of humans having fared decently well after the volcano blew its top.

Of course, the layers of ash falling in India would have been difficult to deal with, Petraglia says. But look at towns covered in ash from volcanoes now, he says. "People are eventually able to clean up."