The largest flower in the world emerges from a parasitic plant. Scientists are eager to understand how this strange and finicky botanical curiosity has persisted in the forests of Southeast Asia. 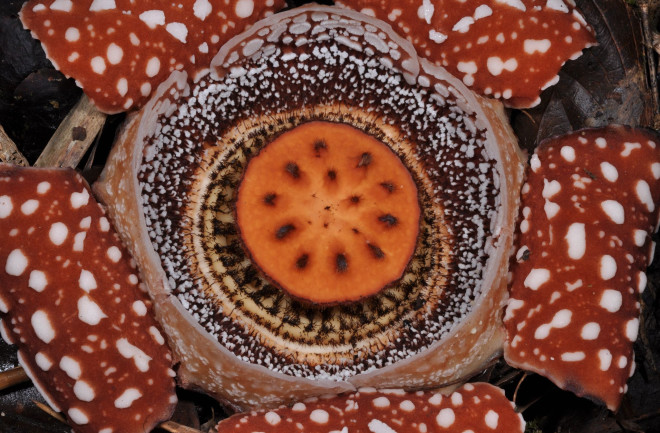 Splayed obscenely on the forest floor, it looks like an alien delicacy, an exotic organ meat harvested from some extraterrestrial beast and left to rot in the wake of an intergalactic debauch. With massive, fleshy petals — the entire flower may be 3 feet across — and a perfume evocative of putrefying meat, it's hardly believable that Rafflesia arnoldii is a member of the plant kingdom. Indeed, there are no vegetative structures in evidence.

These lurid blossoms, the largest in the world, seem to have erupted — blossomed seems too delicate a description — ex nihilo. But a plant it is, albeit a highly unusual one. It is a parasite, supported by three species of Tetrastigma vine, a tropical relative of the grape.

R. arnoldii and its approximately 30 relatives lurk beneath the canopies of tropical rainforests from Thailand to Malaysia, Indonesia, and the Philippines. Also called corpse flowers, they differ from another species known by that name: Amorphophallum titanum, or the titan arum, a relative of the calla lily familiar from floral arrangements. Titan arums boast the world’s largest unbranched inflorescences — massive, phallic structures boasting thousands of miniature flowers." Most Rafflesia are endemic to a single island and some are known from only one or two sites. All species are reliant on Tetrastigma vines as their hosts.

“They are very picky,” says Siti Hidayati, a plant ecologist and lecturer at Middle Tennessee State University who has studied the plant in her native Indonesia. “Of the approximately 90 species of Tetrastigma, only about ten host Rafflesia.”

Many of its other peculiar habits seem similarly maladaptive — some species take nearly a year to flower, for example, a tendency that sees many of the buds destroyed before they even open. Their cankerous, scabby-looking fruits take nearly as long to develop. That assumes the flowers are fertilized at all. Many species have separate male and female flowers — and individual plants may be widely separated. And they may even bloom at different times, further narrowing the window for pollination. The largest species are open for a week at most.

Now, botanists race to understand their obscure biology before they disappear. Facing deforestation, Rafflesia mira of the Philippines is critically endangered and seven additional species appear on the 1997 IUCN Red List of Threatened Plants.

A Flower of Extraordinary Size

The first Westerner to set eyes on a Rafflesia is believed to have been French botanist Auguste Deschamps, who found a specimen of Rafflesia patma on Java in 1797. It was a fittingly macabre discovery for poor Deschamps, who ended up on the Dutch-controlled island when the rescue ship he was aboard was seized. By that point, much of the crew, who had been in search of two earlier research vessels that disappeared, had already succumbed to disease. His illustrations and specimens were later seized by the British on his return voyage to France and were only later rediscovered in the archives of the British Museum.

The genus was formally described in 1820 following the discovery of a “flower of extraordinary size” on Sumatra in 1818 by Thomas Arnold, a botanist who was part of an expedition headed by Sir Stamford Raffles, founder of Singapore. Over the next century, more than a dozen additional species spread across Southeast Asia were named. Prior to 2001, only two Rafflesia species were known from the Philippines. That year, Julie Barcelona had just returned to her homeland and started working as a botanist at the National Herbarium of the Philippine National Museum. Her focus was on ferns but friends of her brother-in-law sent her photos of a strange flower they had encountered on a hike.

“They took a stick and poked it because they didn't want to be eaten,” she jokes, laughing. The reaction is understandable — the resemblance of the flower to the demogorgon villains of the Netflix horror series Stranger Things is uncanny.

Barcelona’s curiosity was piqued. As it turned out, this was an entirely new species — Rafflesia speciosa. She published the discovery in 2002. Since then, the number of Rafflesia species known from the Philippines has ballooned to 13, making the archipelago the hotspot of diversity for the genus.

The speciation of this genus, which belongs to a family of parasitic plants called Rafflesiaceae containing two other genera, occurred relatively rapidly, with some species emerging as recently as 600,000 years ago. The plants are grouped in the order Malpighiales, which also includes willows, violets, and passion flowers. They are most closely related to the family Euphorbiaceae, which contains such familiar plants as the poinsettia. Intriguingly, the flowers of that family are typically quite tiny. What we might think of as the petals of the poinsettia are actually colorful leaves. The flowers are the yellow spheres at the center, not much larger than the head of a pin. The gigantic scale of Rafflesia flowers evolved in relatively short order.

How and why these botanical curiosities resorted to parasitism remains a mystery. Of the scant one percent of plants that suction nutrients off their cousins, Rafflesias are among a select group that are considered endo-holoparasites. Unlike hemiparasites, which mainly draw water from their hosts, holoparasites lack the ability to photosynthesize entirely and siphon the nutrients they need to survive as well.

And endo-holoparasites exist entirely inside their hosts, with only the flowers emerging. Microscopic photographs of Rafflesia show threads of cells invading Tetrastigma tissue. They are only distinguishable by their larger nuclei.

These structures more closely resemble the mycelium of fungi than they do roots, leaves, and stems. In fact, “they have completely discarded the chloroplast genome,” says Jeanmaire Molina, an assistant professor of biology at Long Island University. This is extremely rare in the plant kingdom, with only a single genus of algae having done the same. Similar genetic streamlining was later found in a close relative, Sapria, also a parasite. Inexplicably, they still produce empty plastids. The purpose of these vacant organelles has yet to be discerned.

Their parasitic lifestyle and enormous flowers may explain why Rafflesia takes so long to bloom and set fruit.

“It needs to get all its energy from its host,” explains Pieter Pelser, Barcelona’s husband and collaborator. Both are now at the University of Canterbury in Christchurch, New Zealand. “The danger is, if it takes too much, the host might die!”

He and Barcelona exclaim that last bit in unison, indicating the depth of their partnership. The couple met at Miami University in Ohio and have worked together ever since.\

The battle with its host may also explain why Rafflesia has stolen so many of its genes. As many as 40 percent of its mitochondrial genes and 2.1 percent of its nuclear genes were acquired from Tetrastigma. Over millennia spent lurking in its host’s tissue, the parasite has accrued genetic material that may help it evade detection by emulating some of the qualities of its own cells.

Rafflesia blooms likely reach such fantastic proportions in order to attract their primary pollinators — carrion flies. The insects swarm the flowers in the hopes of laying their eggs on a rotting corpse and instead end up transferring the viscous, creamy pollen of the male flowers to the females. Of course, flies want to give their squirmy progeny the best chance at life possible and so seek out the largest corpses. With their livid coloration, production of volatile sulfurous compounds, and generation of heat, Rafflesia are perfect dupes for prime carrion.

Observations on the strength of the scent vary by species and by observer. Some Rafflesia bouquets are barely detectable to the human nose, while others are noticeable meters away. To Molina, the stench is worth it. “When I smell it, I think, we’re here, we found it,” she enthuses.

Barcelona is less charitable. “It’s like a dead rat,” she chuckles.

The fruit isn’t much better. Molina likens its odor to rancid coconut meat. It isn’t yet known how exactly the thousands of tiny seeds within are dispersed and infect their hosts. Rodents and other small animals have been observed feeding on the noxious yield. The most likely candidate, however, is even smaller. Barcelona and Pelser observed ants carting off seeds of R. philippensis, likely attracted by structures that resemble elaiosomes, oil-bearing bodies on other seeds known to be dispersed by ants. This aligns with the notion that Tetrastigma is inoculated with Rafflesia at the root — tunneling ants may get the seeds to exactly where they need to be.

This is a tantalizing development. Anxious botanists have been attempting to cultivate the plant in an attempt to conserve it. While a handful of transplanted Tetrastigma have supported Rafflesia in captivity, the plants have yet to be successfully grown from seed. The most successful method so far has been the grafting of infected sections of the vine onto healthy plants. Bogor Botanical Gardens in Jakarta coaxed an R. patma to bloom in 2010 by grafting it and have managed to maintain it.

Molina aims to duplicate the technique at the U.S. Botanic Garden. She has schlepped dozens of cuttings from the Philippines in an effort to establish a reservoir of these bizarre plants. So far, no corpse flowers. But hope springs eternal and with any luck, Washington, D.C. will one day soon be redolent with the intriguing stench of Rafflesia.