The thought experiment reveals just how important our planet’s rotation really is. 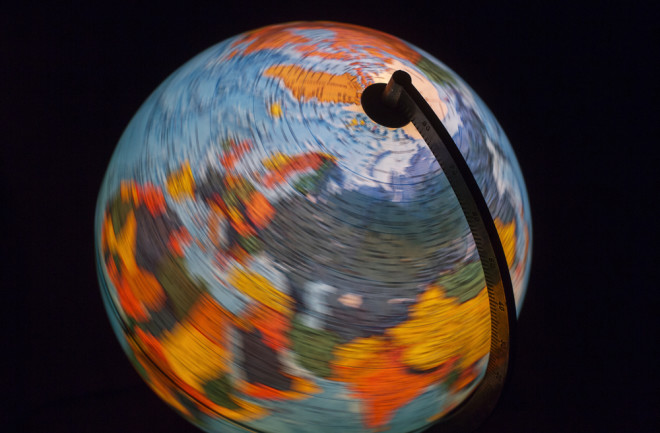 In the 1951 film The Day the Earth Stood Still, an extraterrestrial named Klaatu and his robot companion Gort stop nearly all of the electronics on Earth simultaneously, using their advanced alien technology. Cars, factories, television sets and more all cease to work, and the planet settles into an eerie pause.

But what if the movie meant its title more literally? Imagine an alien with a still more powerful tool, one that could actually stop Earth in its tracks and halt our planet’s rotation.

The Day the Earth Stopped Spinning would be a far more destructive movie than the Hollywood original. We may not realize it, but our planet’s rotation underlies some of the most basic processes on Earth. Indeed, we probably wouldn’t be here if Earth was a stationary planet.

If the Earth stopped spinning all at once, it would be enormously catastrophic for much of the planet’s surface. Though we don’t feel it, we’re all moving along with the planet as it rotates; at the equator, this works out to around 1,000 miles per hour. Stop the planet suddenly, and everything sitting on top of it would go flying eastward. Imagine people, houses, trees, boulders and more being launched sideways at hundreds of miles an hour. In the aftermath, high speed winds, still rotating nearly as fast as the planet, would scour the surface clean.

If the slowdown happened more gradually, the effects would still be dramatic, but would unfold over a longer period of time. The first thing we might notice is that the sun no longer travels across the sky over the course of a day. The apparent motion of the sun comes from Earth’s rotation, so if the planet were stationary, it would cause a single day to last half a year long (though we could look forward to some very long-lasting sunsets).

Without the 24-hour days we’re used to, biological circadian rhythms would be thrown entirely out of whack. The rhythmic cellular processes that tell our bodies when to sleep and when to wake depend in part on regular changes in sunlight to function. Many creatures on Earth, from bees to trees, rely on circadian rhythms to carry out their lives. Changing these cycles could upend normal behavior patterns.

Atmospheric patterns on Earth are also tied to the planet’s rotation. If the planet stopped spinning, it would greatly change the way air currents move (once the 1,000 mph winds had died down). The wind patterns we see today play a significant role in driving rainfall and temperatures around the globe. Any changes to air currents could result in deserts blooming where forests currently stand, for example, or frozen tundra becoming habitable. We’re already seeing something similar, albeit on a much smaller scale, as climate change alters global weather patterns. The results could be catastrophic for organisms that depend on specific environments.

An Earth with no spin would also mean the end of hurricanes. The massive rotating storms are created by Coriolis forces that derive from the planet’s rotation. Winds pulled into the low pressure area of a growing storm are spun counterclockwise in the northern hemisphere and clockwise in the southern hemisphere, resulting in the spiraling lines and central eye that define a hurricane. This process is one reason the storms can grow so powerful — so cutting them out might be one of the rare benefits of halting the planet’s spin.

But a motionless planet would also likely mean the end of our magnetic field. Though scientists are still unclear on the exact mechanisms, it’s thought that the magnetic field is created by the movements of Earth’s liquid metal core. Scientists call this a dynamo, and the end result is a web of invisible magnetic field lines arcing around the planet. The effects of losing that field would be far worse than just no longer being able to navigate by compass. Earth’s magnetic field protects us from cosmic rays and electromagnetic storms from the sun, among other things. It’s definitely something we’d want to hang on to.

The Planets of Eternal Day

As far as we know, there aren’t any planets out there that don’t rotate at all. The processes that form planets and other celestial bodies naturally result in rotation, meaning that all worlds spin from the outset. But there are some planets that appear to not rotate, something astronomers refer to as tidal locking.

These are worlds that show the same face to their star at all times, resulting in permanent night and day sides. Gravitational interactions between planets and their stars can gradually slow a planet’s rotation rate down until it exactly matches its orbital period.

The moon is a good example of tidal locking. We only see one side of the moon, no matter where it is in the sky or what phase it’s in, because it’s tidally locked to the Earth. The same situation likely occurs on many exoplanets, especially those close to their stars where the gravitational pull is stronger.

Though these planets might seem like extreme places — frozen on one side, baked on the other — some scientists have suggested life might still find a way there. Some astronomers think extraterrestrial life could find a happy medium in the twilight zone of tidally locked worlds, near to where day turns to night. Others have theorized that atmospheric circulation might keep some tidally locked worlds temperate all over, if enough heat could be spread around the planet efficiently.

Earth isn’t likely to ever get tidally locked to the sun — we’re too far away for that to happen. And, though our planet’s rotation is slowing down ever so slightly (a day gets about 1.7 milliseconds longer every century), our planet should never stop spinning completely. That’s something to be thankful for.