What Wiped Out the American West? Investigating a Triassic Extinction 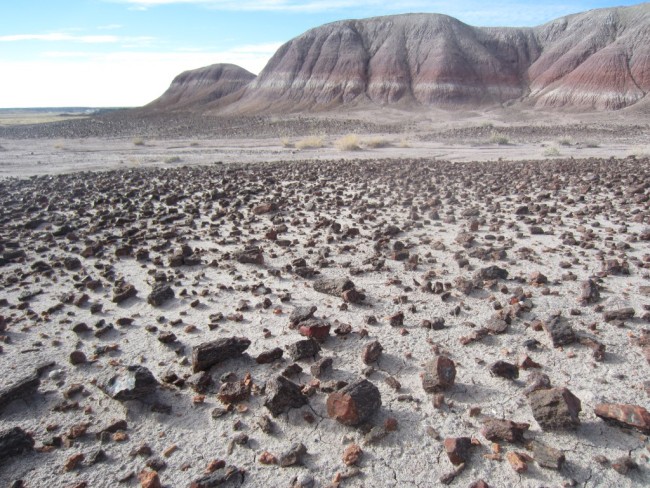 Strewn across the dusty ground is the wreckage of a wetland forest that suddenly wilted and died 215 million years ago. Paul Olsen gestures at the broken lumps of white, red, and black quartz scattered about. “You see how it looks ropey?” he asks. He holds up a piece. “It looks like someone took little pieces of rope, snipped them up, and laid them down.” Olsen believes that these scattered rocks mark the moment of a mass extinction that wiped out many species across North America. He would like to identify the calamity that triggered this extinction. But as I stand beside him in the midday sun, I’m unable to see the subtle clues that his trained eye perceives so easily. As I look at the rocks all about, I simply don’t see the ropey, cylindrical shapes that he’s talking about. Olsen is a white-haired paleontologist with the Lamont-Doherty Earth Observatory in New York. He’s brought me to this mysterious spot in the Petrified Forest National Park in Arizona — not the famous part of the park dotted with petrified logs two feet across, but instead a part that most tourists never glance at. The water-eroded badlands surrounding us are striped in pale, anemic layers of beige, pink, and white clay that doesn’t support more than a few clumps of grass. The ground is bare aside from thousands of quartz lumps lying around. After staring at the rocks for 10 minutes, something in my brain finally clicks into place — like one of those brain teasers where you stare at a grid of dots without focusing, and suddenly out pops the shape of a spaceship or cartoon character. I realize in an instant that most of these rocks really are shaped like cylinders — some of them squished, some branched, some bent, some of them stuck together — but most of them, inescapably, cylinders. These rocks hold a great mystery, says Olsen. 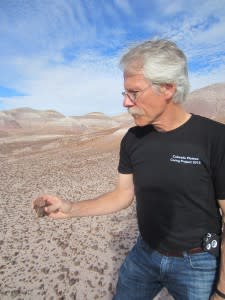 Paul Olsen inspects a piece of quartz at the Petrified Forest. Courtesy Douglas Fox These fragments have crumbled down from an inconspicuous layer of rock 15 feet up on a steep hill above us. Paleontologists call that layer the “persistent red silcrete,” and it snakes around the edge of every hill in sight. It’s only a few inches thick. But if you take a rock hammer to it, you discover that the layer is almost entirely composed of these cylindrical strands of tangled rock, pressed together like particle board. “It’s a very odd layer,” says Olsen. “It looks like it’s made of a mat of [fossil] vegetation that’s been flattened.” The rocks may be fossilized mats of tree roots, he says – or possibly a mishmash of plant stems and branches. This layer marks the break between two segments of geologic time — the Adamanian and Revueltian — when many of the plants and animals in what is now the western United States went extinct.

William Parker, a paleontologist at the national park, and Jeffrey Martz, a paleontologist at the Denver Museum of Nature and Science, first realized in 2008 that the red silcrete might represent an extinction. More recently, in 2011, researchers from the University of Utrecht in the Netherlands reported finding a “fern spike,” a layer rich in fossilized fern spores, just above the red silcrete. Ferns are often the first plants to grow back after modern forest fires — and this ancient fern spike could likewise represent a moment when ferns that were adapted to heavy clouds, low light, and drought suddenly took over in the wake of a massive forest die-off. Parker, Martz, Olsen, and colleagues are now trying to identify the cataclysm that caused that die-off. They believe the culprit to be a large meteor that struck the Earth 215 million years ago in what is today Canada. The Manicouagan Crater that it produced is marked by an unusual ring-shaped lake, 60 miles across, that can be seen from space. The extinction layer in Arizona is about as old as the Manicouagan Crater in Quebec — give or take a couple million years. Proving the link between them will depend on more accurate dating of the red silcrete and the rock layers immediately above and below it.

Cut to the Core

Olsen was working on that when I visited him in the Petrified Forest last November. He and a team were busy drilling a 1,600-foot core of pristine, unweathered rock from another location in the park, about 10 miles from where the red silcrete layer is visible above ground. Having that core will help geologists achieve an important goal: tying together all of the different layers of rock that are known to exist in the Petrified Forest into a single sequence. Most of the layers that they’ll encounter in the core are known from places where they’re exposed above-ground — but geologists are uncertain of what order they fit together in. Somewhere in that core, about 800 feet down, they’ll locate the red silcrete layer. They may not recognize it by sight because this ancient landscape consisted of a patchwork of swamps, ponds, and braided rivers that would give rise to different types of minerals and rocks in different places. But chemical measurements should still allow them to find the layer in the core that represents the same moment in time. Once they’ve done that, they can measure the age of the rock more precisely than ever before. They can also look for minerals, such as impact diamonds or the rare element iridium, that could have been thrown up by the collision. By studying the core, they will finally understand whether the extinction layer in Arizona was caused by the meteorite impact in Canada — or by some other, undiscovered disaster. Watch for Douglas Fox's upcoming feature in Discover to read more. Images courtesy Douglas Fox 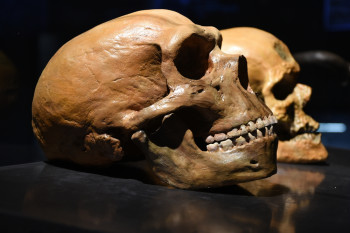