What the World Needs Now is Low-Carb Corn 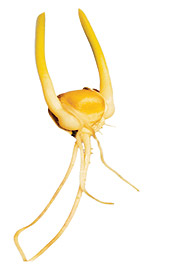 Two-pronged corn kernels could provide a double dose of protein.

New diets are pushing agricultural research into faddish directions, such as the improbable low-carb potato from researchers at the University of Florida and the Dutch seed company HZPC. Or look at what Daniel Gallie, a biochemist at the University of California at Riverside, has come up with: genetically engineered corn that has half the usual amount of carbohydrates and twice the normal protein.

Gallie hit on this genetic enhancement by accident while studying cornflowers, the blooms that produce each kernel on the cob. Normally cornflowers come in pairs. During development one flower normally dies, and the other develops into a kernel. By splicing extra copies of the hormone that instructs one of the flowers to stay alive, Gallie found he could keep both alive. The result: two protein-rich embryos in each kernel. “If you’ve got twice the normal embryo, something’s got to give,” he says. “And in this case the carbohydrate-rich endosperm shrinks to accommodate.”

Test plantings in greenhouses have grown successfully, and Gallie has several companies interested in developing the corn for commercial agriculture. Although low-carb corn could lead to Atkins-friendly Doritos or taco shells, Gallie notes it could also address more pressing problems. “Protein malnutrition is the leading cause of death in children in developing countries, and most of these countries already produce corn as a major cereal crop,” he says. “Something like this could potentially save a lot of lives.”