The giant cephalopods (squids and octopuses) of the deep sea have captured the imagination for centuries. But despite our fascination with these creatures, they are still enigmas, their behaviour illuminated only by the occasional lucky video or the presence of scars on animals they fight with. For many species, including the famous giant squid, we still know relatively little about what they eat and what position they occupy in their ecosystems.

Yves Cherel from the Centre d'Etudes Biologiques de Chize has some new answers about the behaviour of deep-sea cephalopods and they came from a most unorthodox technique- he studied remains recovered from the stomachs of dead sperm whales.

It's clear that sperm whales feed on squid and octopuses. Sucker-shaped scars along the backs of some individuals have led people to picture titanic battles between the whales and their giant prey. Once eaten, the cephalopods' soft bodies are easily digested, but they also have hard, parrot-like beaks that aren't easily broken down.

By looking in the stomachs of three sperm whales stranded in the Bay of Biscay, Cherel recovered hundreds of beaks from 19 separate species - 17 squids including the giant squid, the seven-arm octopus (the largest in the world) and the bizarre vampire squid. Together, these species represent a decent spread of the full diversity of deep-sea cephalopods. 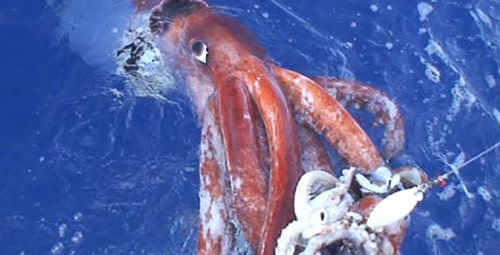 Levels of carbon-13 can tell us how deep an animal lives, whether it swims offshore or inshore, and whether it spends its time in the open ocean, or sticks close to its floor. All of the cephalopods' carbon-13 levels fell within a narrow range, indicating that all 19 species live in similar and overlapping parts of the ocean.

The giant squid proved to be the deepest dweller of the lot and in general, the largest squids lived closest to the ocean floor. Other studies have found that the larger these animals get, the deeper they live, suggesting that deep-living is part of the ageing process. It's possible that the older animals sink deeper to exploit the rich sources of food hugging the bottom of the ocean. 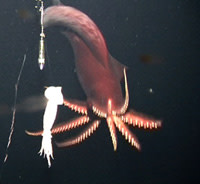 Nitrogen-15 is more common in eaters than in the eaten, which means that levels of this isotope are a good indicator of an animal's position in the food chain. All of the cephalopods were clearly important predators, with even the lowest ones occupying the same positions in the food chain as dolphins. But Cherel found that among them, the ruling species was the confusingly named Dana octopus squid (Taningia danae). This squid's levels of nitrogen-15 were similar to those of the sperm whales that ate it, showing that it too is a major predator that shares a position in the food web alongside other "megacarnivores".

Four years ago, Japanese researchers led by Tsunemi Kubodera captured the first ever videos of T.danaein its natural habitat. The amazing footage showed that the squid accompanies its attacks with blinding flashes of light emitted from organs in its arms. The film suggested that the squid is an aggressive and tenacious predator, rather than a sluggish and inactive animal. Cherel's analysis of their beaks supports this portrait.

The larger cephalopods weren't necessarily the top predators, and Cherel found that even very large species like the Grimaldi scaled squid had relatively low levels of nitrogen-15. Neither of the two giant species - the seven-arm octopus or the giant squid - reached the top predator position occupied by some of their relatives and even smaller, more fragile species like Chiroteuthis were similarly ranked.

Cherel's results shed some light on the cephalopods' place within their habitats, but they also show how so many species can co-exist - they either inhabit different regions or feed on different prey. Consider, for example, the two biggest specimens, the giant squid and the seven-arm octopus. The former lives in far deeper waters than the larger and feeds on prey higher up in the food chain.

In some ways, eaten beaks only provide a superficial glimpse into the lives of deep-sea cephalopods. Nonetheless, they remain one of our only tools for understanding more about these elusive animals and Cherel believes that they have only begun to yield their secrets. Analysing levels of trace elements in the beaks could tell us more about the specific habitats that these animals live in, beyond simply the depths they frequent. And analysing the chemical composition of the beaks at different points in their growth could tell us how an individual animal's habits and diet change as it ages.