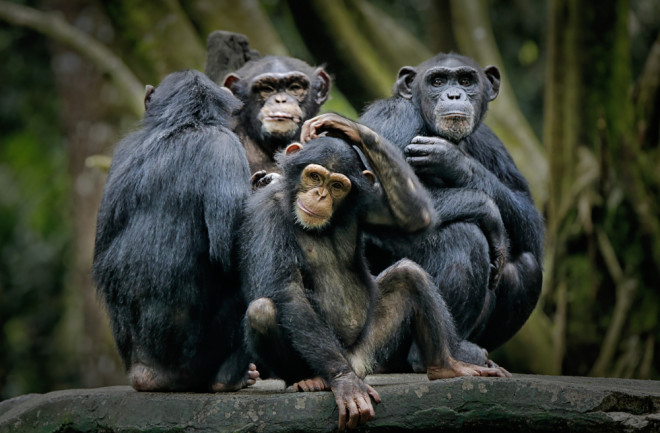 Kanzi is a linguistic all-star among apes. From an early age, the captive bonobo learned over 400 symbols representing words, which he points to, in order to communicate with people. He understands even more spoken English and basic grammar, and followed verbal directions as well as a 2-year-old human during a study conducted in the late 80s.

Having watched Kanzi clips more times than I care to admit, I’m ceaselessly amazed by his communication skills. But still, as the most linguistically talented ape, he’s just on par with a run-of-the-mill toddler. Kanzi may comprehend around 1000 words, but there are over 170,000 in the Oxford English Dictionary.

Language is one of those traits that distinguish humans from all other living primates. Yet, this uniquely human capacity didn’t emerge, full-fledged, from nothing. Most researchers agree that language is a complex system, integrating many cognitive, vocal and auditory processes. The various components may have evolved independently, for different purposes. But when combined in living humans, they constitute language.

Elements of language found in other primates likely existed millions of years back, when the common ancestor of humans and these species roamed the earth. “That provides a starting point…That’s what we had, before we had language,” says Isaac Schamberg, a primatologist who studies ape communication.

Those pieces of language not found in other primates may have emerged exclusively in the human lineage. This is one major way researchers reconstruct the evolution of language — by studying if and to what degree (nonhuman) animals possess its requisite parts.

Over the years, primate communication research has taken different forms. The so-called ape-language studies, like Kanzi, were attempts to achieve language-like exchange between apes and people. They sought (and failed) to prove that apes raised in human culture could develop full language abilities.

These studies began in the 1930s and peaked in the late 20th century, producing ape celebrities like Nim Chimpsky — a chimpanzee named as a taunting nod to famed linguist Noam Chomsky, who argues that language is unique to humans. Today, this line of research has been mostly abandoned due to concerns over ethics and scientific merit. Nevertheless some of the experimental apes live on. Kanzi is now 38 and resides with other linguistic bonobos at the Ape Cognition and Conservation Initiative in Des Moines, Iowa.

Few researchers condone repeating this kind of research, but the already-conducted studies offer tantalizing data. They’ve shown that great apes can learn the meaning of hundreds of visual or auditory signs. For instance, Washoe the chimpanzee, Koko the gorilla and Chantek the orangutan could produce and comprehend about 200 words in sign language.

Kanzi was especially interesting because he wasn’t explicitly trained. He was just a baby, hanging around his adopted mother Matata, who researchers were trying to teach symbolic words. While the scientists had limited success with Matata, Kanzi naturally picked up words — just as most human infants do when learning their native tongue.

His proficiency was most rigorously tested in a studypublished by psychologist Sue Savage-Rumbaugh and colleagues in 1993, the data from which continues to be analyzed. Over several months, Kanzi and a toddler were given 660 novel — and sometimes impractical — commands, like “Put the pine needles on the TV” or “Pour the Perrier water in the bowl” (yes, the ape knew Perrier).

Not only did the study show that Kanzi possessed an extensive vocabulary, it also revealed that he grasped meaning imposed by sentence structure, or basic syntax. For instance, he correctly distinguished between the commands, “put the hat on your ball” and “put the ball on the hat.” Overall, the kid and Kanzi carried out 54 and 59 percent of the tasks respectively, which is impressive comprehension and compliance, as anyone with a 2-year-old can attest.

Today, most scientists interested in primate communication study the animals in their natural environments. Some of this research entails prompting wild animals with prerecorded calls or pretend predators (such as an experiment published this week where researchers dressed like tigers to trick orangutans); other studies just follow primates around, observing how their vocalizations and gestures relate to events and behaviors.

The former line of research was initiated by psychologist Robert Seyfarth and colleagues in their classic study of vervet monkey alarm calls, published in 1980. The scientists observed, recorded and played back calls of wild monkeys, proving that specific sounds signaled particular predators. Vervets climbed trees when they heard a leopard call, looked skyward after an eagle call, and gazed at the ground after a snake call.

“Those vervet monkeys and also a lot of monkeys have these discrete calls… where it seems like, ‘oh wow, this is like a word,’” says Schamberg, a post-doctoral fellow at Harvard University.

But vervets are our very distant relatives; the human and vervet lineages split over 25 million years ago . Arguably, more informative distinctions come from our closer primate relatives, the great apes — and especially our closest relatives, the two species of chimpanzee, bonobos (Pan paniscus) and common chimpanzees (Pan troglodytes). If anything is unique about human language, that component should be absent in chimps and other apes.

Surprisingly, to date, there’s been less research on wild ape vocalizations compared to monkey calls. Schamberg explains, this is partially because, “apes don’t have a very discrete vocal repertoire. They have different call types, but they sort of bleed into one another.”

To him, chimp and bonobo vocalizations are like a code. “We just don’t understand it, but we could,” he says.

In my next story, we’ll review what aspects of this code have been cracked, and what that reveals about language evolution.