Popular culture usually gets Viking garb wrong. Here’s what research says about the appearances of these infamous travelers, warriors and (mostly) farmers. 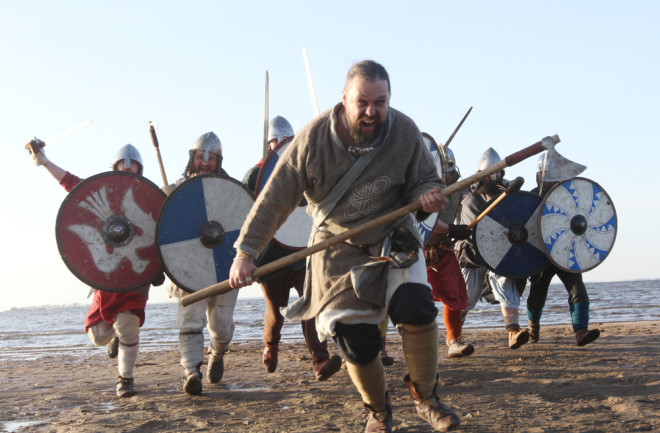 Movies and TV shows have popularized the view of Scandinavia’s Vikings as grimy warriors who terrorized women as they traveled throughout modern Europe, Central Asia and North America between roughly the ninth and 11th centuries.

In reality, most Vikings were Middle Ages farmers who wore simple, durable clothing, says Ulla Mannering, an archaeologist who researches North European textiles and costumes at the National Museum of Denmark. And while a select few enjoyed more luxurious lifestyles and engaged in ferocious battles and exciting trades abroad, even their appearances would seem fairly plain to today’s audiences. “I don't think the Viking age or prehistory itself was particularly fancy,” Mannering says. “It would probably not satisfy our modern eye.”

If you’re looking to accurately replicate Viking trends with your own getups, here’s what we know (and don’t) about their clothing, grooming and accessories.

Keep It Practical (and Clean)

While Viking costumes may look extravagant on screen, they don’t always align with historical evidence. Most knowledge on Viking clothing comes from decayed, fragmented samples found in graves and bogs, but researchers do have a general sense of their style. Their clothing likely involved basic shapes and was composed mostly of flax and wool.

Hollywood often makes the mistake of including modern-looking knitwear, while recovered garments are far coarser than today’s weavings. Unlike current fast fashion, these pieces were built to last. Like modern-day thrifting, garments were probably passed down from high-class wearers to lower-class counterparts, Mannering says. (Or, they were simply stolen and repurposed.)

Media representations also err in including entirely silk garments. Only the wealthiest people could access the silk imported from far-off destinations like the Byzantine Empire. Due to its high price, strips were sewn into other materials.

Most women stuck to thick, strap-style dresses topped with a sturdy cloak. Men liked to layer, too, often with a long tunic and trousers under cloaks. As for footwear, Vikings donned leather boots.

This look held up regardless of class, as proven by a recent garment reconstruction from two 10th-century graves in Denmark. Yet the embroidery in these findings were highly unusual, Mannering says, even for expensive clothing (it might have been recycled from a wall hanging). Overall, be wary when the media suggests that even the ritziest Vikings strutted around with detailed stitching and tight, complex clothing patterns.

Read more: The Secret History of the Vikings

Vikings did go all out with finely made furs, despite the media stereotype that they wore rugged, unfinished animal pieces. These Scandinavians actually applied fine craftsmanship to their coats and cloaks. “There’s a clash in visuals because we have an idea that if you are a tough Viking, you will look even tougher with a skin thrown over your shoulder,” Mannering says. “But Vikings, with the capacity of wearing a real fur garment, would never just have a half-made item like that.”

Unfortunately, it’s unclear exactly what colors the Vikings wore. Researchers have proof of red, blue and yellow dyes (which they could use to make green), Mannering says. But we aren’t sure how commonly each was used and how they were sourced. Some unearthed Viking textiles no longer carry traces of dye, which complicates the mystery behind their clothing hues.

And while both classic flicks and recent portrayals give the impression that the Viking population rejected baths, evidence shows that they likely prioritized hygiene. Archeologists have uncovered artifacts like combs, razors, tweezers and ear spoons to clean earwax. The Vikings also concocted an early form of shampoo.

The stereotype of grubby Vikings likely stems from an account by Arab traveler Ahmad ibn Fadlan, who may have exaggerated the “dirty” appearance of Swedish Vikings to entertain readers. And the pagan warriors’ attacks on Christian monasteries no doubt cemented their barbarous reputation.

Focus on the Small Details

According to both written sources and archeological finds, Vikings were big on accessories. For example, many wore belts equipped with handy tools for either expeditions or a normal day on the farm. They were also keen on bling, sporting necklaces and arm rings made of materials like wood, glass and gold. In their burials, well-traveled Vikings made sure to flaunt their jewelry brought from places like North Africa, the Middle East and India.

Jewelry has even served as a research tool: When Viking-era graves lack skeletal indicators of gender, researchers have relied on the presence of brooches — these have popped up in upper-class women’s remains throughout the former Viking world. Used in pairs to fasten cloaks, brooches came in a wide range of designs and may have communicated marital status, similar to modern wedding rings. They differed by country, suggesting distinct regional styles.

“Varieties in form, materials and style were used to mark both gender, rank and local identity,” says Marianne Vedeler, an archaeologist at the University of Oslo’s Museum of Cultural History who has studied Viking textiles. “TV shows and films could make use of this to tell better stories.”

As for the male warrior caricature, historians doubt that they actually wore cartoonish horned helmets in battle (though these have appeared in art from this era). In fact, only one preserved Viking helmet has materialized in Scandinavia. And it was horn-free. Archeologists have found portions of Viking helmets in Denmark, but their popularity remains unknown. Similarly, we know of one intact suit of chainmail, which appeared with the sole-surviving helmet. This was likely worn exclusively by elites and professional warriors, despite its common appearance in mainstream depictions.

Before you try out the side-shave hairstyle often seen on screen, historical sources don’t necessarily support it. Women typically wore their hair long, and men may have commonly rocked a reverse mullet.

Most surprisingly, evidence suggests that the Vikings simultaneously enforced rigid gender roles and allowed for fluidity in certain contexts. To the History Channel’s credit, the Vikings series has highlighted the possible existence of female warriors. The show also embraces evidence of makeup use among both Viking men and women, who may have applied eyeliner to magnify their beauty — consider buying some kohl pencils to complete your Viking look.