What Might Happen if Yellowstone Were Really Heading Towards an Eruption? 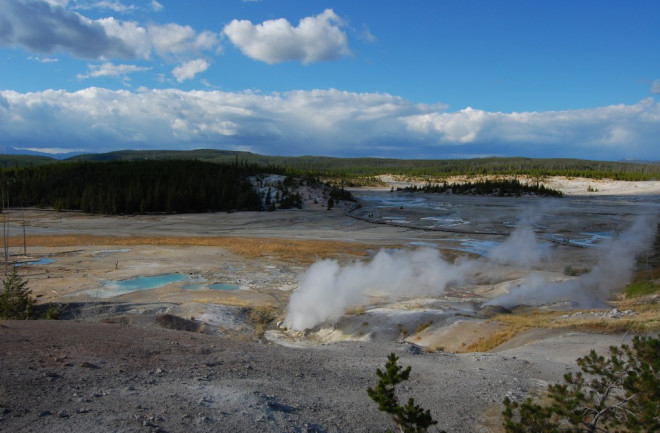 A geyser basin at Yellowstone Caldera. Image by Erik Klemetti

Everyone loves Yellowstone, don’t they? For a volcano that might not have erupted for 10,000 years, it gets a disproportionate amount of media attention. Much of the hype is just because the media (news and entertainment alike) has made Yellowstone seem like something that is bound to erupt in our lifetimes and destroy all civilization. Yet today, there are really no signs that the Yellowstone caldera is heading towards a new eruption anytime in the near future — and that’s geologic “near future”, so decades to centuries … or likely even longer.

So, Yellowstone isn’t heading towards an imminent new blast. However, what would we expect to see if Yellowstone were ramping up towards a new eruption? Much of it would be what we might expect from any volcano that is preparing for a new eruption.

Uplift: Magma takes up space. So do all the gases that molten rock releases as it sits underground. However, there aren’t big open caverns underground for the magma to fill, so it has to shove existing rock out of the way and the easiest direction to do that is up. So, as magma increases underneath Yellowstone (or any volcano), the land surface should rise.

Now, just because the land surface is rising, it doesn’t mean an eruption has to happen. Magma can fill in under a volcano, causing uplift, but never reach the surface. On top of that, other processes can cause the land surface to rise, like changes in the hydrothermal system (the hot water flowing above the magma). So, uplift needs to be extreme to really be a clear sign of an eruption … and there might not even be a clear sign of uplift before the eruption. The final complication is that big volcanic systems like Yellowstone or the Campi Flegrei are “restless caldera”, meaning the land surface actually rises and falls frequently likely due to changes in water flowing underground or rates of magma entering the system.

Gas emissions: When magma rises, it loses dissolved gases, like water, carbon dioxide and sulfur dioxide. Keeping careful track of such emissions from springs, gas vents, geysers or anywhere on a volcano can give hints that magma is rising. The changes in these leading up to an eruption likely won’t be subtle — CO2 or SO2 emissions might increase 10-fold or more in a short period. However, even big increases don’t necessarily mean an eruption will happen as we’ve seen examples of increases in CO2 emissions (see Mammoth Mountain in California) where no eruption came.

Earthquakes: Like I said, magma takes up space. So, when magma moves, it has to make space mainly by “pushing” rocks out of the way. This causes earthquakes, either due to cracking rocks or the actual magma moving in the conduit. Seismologists look for these rock fracturing earthquakes and for “harmonic tremor” related to magma motion. As these increase, the chances that magma is moving increase. Shallower earthquakes mean the magma is getting closer to the surface.

That being said, most volcanoes have earthquakes all time — even when they aren’t headed towards any eruption. This is doubly so for a “restless caldera” like Yellowstone, where earthquake swarms are common. They might be due to new magma coming in deep underground or from other fluids (like water) moving in the crust. Magma can rise and stop as well, so just because a swarm has started, it doesn’t an eruption is clearly coming.

Heat: Magma is hot! Even at a place like Yellowstone where the magma is cooler than it is at a volcano like Kīlauea (due to the composition of the magma), it is still at 750ºC or higher. The land surface is cold, so as magma rises, you can see evidence of that heat. It might take the form of increased activity at hot springs or geysers (although these can both change on their own as well). It might be thermal signals in different parts of the volcano — usually measured by infrared cameras on satellitesor the ground.

These are the big four of volcano monitoring, but one sign does not an impending eruption make. If magma is really rising and getting close to the surface to create an eruption, then what you should expect is multiple lines of evidence. Do we see uplift and earthquakes in the area of the uplift and increased gas emissions/heat in the area as well. These signs moving in concert are better clues to the potential of an eruption. Also, we want to think about rates. How quickly are these factors changing? And to what extent? Are gas emissions up a little or a lot? Is the earthquake swarm dozens or thousands of earthquakes?

(By the way, here are some things that are not signs of an impending eruption: animal behavior (no, they don’t have any special connections of the Earth that gives them a heads up), black helicopters, lunar or planetary cycles, UFO sightings and the ravings of internet weirdos.)

What if Yellowstone Were Going to Erupt?

If Yellowstone were marching towards a new eruption, we might expect to see all four of these factors changing rapidly in the same area. However, the other wrinkle is the size of the eruption. It can be very hard to forecast both the timing and size of an eruption. At Yellowstone, the most common eruptions are relatively small — maybe the eruption of a new rhyolite dome that might as big or smaller than the 1980 St. Helens eruption. The three giant eruptions that have happened at Yellowstone over the past two million years are uncommon, so they are the less-likely scenarios if signs of an eruption were coming.

However, with the size of the giant eruption in thousands of cubic kilometers of ash and debris, as opposed to a smaller eruption that might be 5-10 cubic kilometers, the signs of an impending massive eruption would be like nothing we have seen in modern human history. Would the uplift be on the order of tens of meters over many square kilometers? Would it cause the hot springs across the entire basin to heat up dramatically? Would earthquakes be felt in places throughout Yellowstone?

The closest we might get to a very large eruption since the advent of modern volcano monitoring techniques would be the 1991 eruption of Pinatubo … and even then was challenging for volcanologists to predict whether an eruption was bound to happen. Add on the complications of how long it might take for the Yellowstone system to prime for a massive eruption and the question becomes even cloudier. Studies have suggested timescales of years to centuries for all the necessary eruptable magma to accumulate before a big blast. If it is on the longer end of that spectrum, how do we monitor changes that might last longer than the lives of the people who first noticed it?

In the end, any new activity at Yellowstone is closely watched by the Yellowstone Volcano Observatory. Right now, the caldera’s status is green, the lowest and the only status the caldera has known since the USGS started giving volcano’s alert statuses. Yellowstone will continue to be restless. The ground will rise and fall. Earthquake swarms will come and go. Geysers will change their behavior.

Take any prognostications that these are the signs of a new eruption with a massive grain of salt. Lots of things have to change all together at Yellowstone before volcanologists might think an eruption could be in the works. Until then, enjoy the caldera for the geologic rarity that it is.