On the 3rd of October, 2006, Nicolas Makris watched a quarter of a billion fish gather in the same place. They were Atlantic herring, one of the most abundant fishes in the ocean and one prone to gathering in massive schools. This was the first time that anyone had watched the full scope of the event, much less capture it on video.

The first signs of the amassing herring appeared around 5pm and by sunset, the gathering had begun in earnest. Once a critical level of fish was reached, the shoal expanded at a breakneck pace, suddenly growing to cover tens of kilometres within the hour. By midnight, the shoal contained about 250,000,000 individuals - 50,000 tonnes of fish gathered in one place.

The ability of fish to congregate in gigantic schools may be familiar but until now, we've known remarkably little about the things that set off these gatherings. Without Facebook as a coordinator, what causes small groups of herring to take sociability to an extreme? Scientists have tried to follow gathering fish aboard research vessels but these can usually only see a small fraction of the massive schools are any one time.

Makris wasn't so hampered. He used a new technique called Ocean Acoustic Waveguide Remote Sensing (OAWRS) that can visualise fish populations over vast distances in real-time. It needs two ships, one to send out sound waves in all directions and a second to pick up their echoes as they bounce off fish and floor alike.

In an instant, it can scan an area of ocean 100km in diameter, and it can update its images every 75 seconds, providing an unprecedented view of the genesis of herring shoals. The location was Georges Bank off the coast of Maine, where herring migrate to spawn in early autumn. Makris pointed his instruments at an area where herring historically gather, and waited.

The get-togethers always started as the light of the afternoon starts to fade. At first, the herring are scattered and solitary, spread out in a thin layer close to the ocean floor. But just before sunset, they start to get organised. Small, vertical clusters form that rise above the seafloor and merge horizontally.

The school expands in a series of waves spreading out over tens of kilometres from several starting points. These waves move at more than ten times the swimming speed of a herring, which means that they're the result of fish converging on multiple points rather than rushing towards a single centre.

Makris found that the get-together only really kicks off once the fish reach a critical threshold of one fish every five square metres. Below this level, fish would gather at a rate of less than 0.1 individuals per square metre per hour. Above this critical mass, the pace increased by more than 50 times. By midnight, the shoal had grown to 40km at its widest point, and it stayed that way until the returning light of day caused the herring to dissipate once more.

Once formed, the shoal migrated as one at a slow speed of 0.2m/s. This pace matches that of an average swimming herring and suggests that the millions of fish were swimming synchronously. They headed south towards shallower spawning grounds, presumably to shoot out eggs and sperm en masse.

It's unlikely that the herring form large shoals in order to feed. As he was watching the fish, he also took samples of them using trawlers. He confirmed that over 99% of them were indeed Atlantic herring but also found that virtually all had empty stomachs. Indeed, past studies have found that herring don't feed when they spawn. 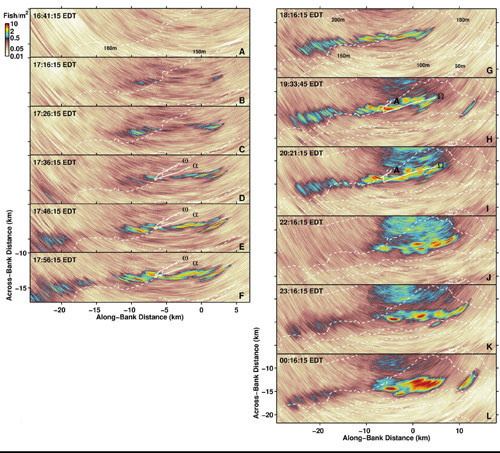