What Made These Footprints 5.7 Million Years Ago? 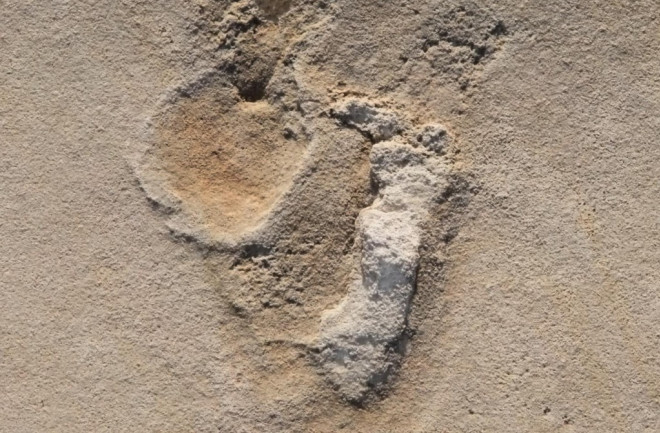 Is this depression (and others like it) at a site in Crete actually a footprint? If so, what made them? Researchers believe they are indeed footprints — and were made 5.7 million years ago by hominins. If they're right, it changes much of what we thought about human evolution. (Credit Andrzej Boczarowski)

UPDATE, 15 September: Reports are beginning to surface that the site may have been destroyed by a vandal, but details are slim and conflicting. Follow this developing story here.

UPDATE, 6 September: Had a great chat with Uppsala University paleontologist Per Ahlberg, the corresponding author for the study, who clarified what the landmass situation was at the time the trackways were made. Turns out I was jumping the gun in the original version regarding the amount of exposed land; see below for clarification and some additional thoughts from Ahlberg (in bold), and watch for a story in print soon. It's the Friday before a long weekend (at least for most of us in the U.S.) and I get it: You're thinking about your plans for the next few days, wrapping up some stuff before slipping out of the office maybe a little early. You're not in the mindset of having your paradigm shifted. Sorry. A new study suggesting hominins were walking across a Greek island 5.7 million years ago is here to blow your mind. In a year of big shake-ups in the story of human evolution, a study published in the Proceedings of the Geologists' Association may be the biggest shock yet: A team of researchers says multiple depressions preserved in a layer of 5.7 million-year-old sediment belong to a hominin, a member of our family tree. Okay, you're thinking, that seems legit. After all, we've known that Sahelanthropus, the oldest known hominin to date, was hanging out in what's now Chad at roughly that time. Well, here's the thing: the footprints are at a site called Trachilos, on the Greek island of Crete. That's a vacation destination no hominin was supposed to set foot on until millions of years later.

Do not, by the way, confuse the idea of hominin evolution with modern human evolution. Hominins include a number of fossil finds not directly ancestral to us, such as "the hobbit" Homo floresiensis of Indonesia, the archaic Homo sapiens announced earlier this year from Jebel Irhoud in Morocco, the surprisingly recent, small-brained Homo naledi of South Africa and the mysterious Dmanisi hominins from the Republic of Georgia, just to name a few. The hominin family tree is really more of a bush, after all.

Reacting to some critics who've interpreted the paper as an attempt to stake a Eurocentric claim on the roots of our species, Ahlberg minces no words: "We are making no claim whatsoever. I don't give a flying [bleep] where the origins of Hominini is."

(And no, I'm not censoring him. He bleeped himself.)Ahlberg adds: "It's clear modern humans evolved in Africa."The Game Is Afoot As to why the team thinks they're hominin, take a look at your foot, at anyone's foot. The human foot is some pretty fancy, uh, footwork, evolutionarily speaking. We've got those five forward-facing toes (even the big toe is in line, which is unique among primates) and that thing we call the ball of the foot, plus a long sole and other traits made for walking over long distances. The Trachilos tracks appear to have all those features, albeit not quite as highly evolved as modern human feet. But close... in fact... almost a little too close. Even if you accept these are 5.7 million-year-old hominin footprints, there's still a problem. And how do you solve a problem like Ardi? That would be Ardipithecus ramidus, who was walking around Ethiopia 4.4 million years ago and is often placed as a direct ancestor to the australopiths (including Lucy) and, eventually, our own genus. Ardi's feet are much more ape-like, including that big toe sticking out, or diverging, more like a thumb. In other words, Ardi's feet appear to have been more primitive than those of the potential Trachilos trekker, even though Ardi is more than a million years younger. "Ardi is a magnificent discovery, and I don't want to put it down in any way," says Ahlberg. "But there is no evidence it's a direct ancestor." Remember: with so many hominins running around prehistory, it's possible the fossil record has not yet answered that burning question, who's your (ancestral) daddy? The Next Step... The paper comes just a few months after a separate team re-examined a couple teeth, both more than 7 million years old, from Greece and Bulgaria, and concluded they might belong to an early hominin. Personally, I think those conclusions aren't supported by the evidence, but maybe more convincing material will come to light. In a year when we've learned our species is at least twice as old as we thought, and some researchers have claimed that hominins were in the Americas more than 100,000 years before the conventional arrival date, hey, anything goes. If you don't have time to read the paper, I encourage you to check out the Author Presentation by Ahlberg (in the right column of the online version of the paper. It's less than five minutes long and gives a great overview). You should also check out an interesting commentary on the paper, and the process of trying to get their peers to pay attention, written by Ahlberg and another co-author, Matthew Bennett, the leading expert on ancient trackways. They make a compelling case for their conclusions far more eloquently than I ever could.