What Lurks In Logs 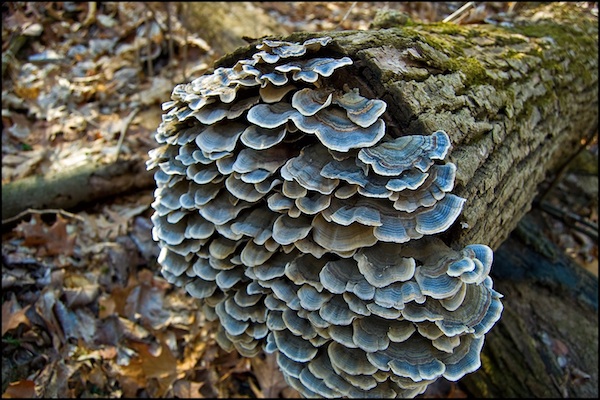 The world, it bears reminding, is far more complicated than what we can see. We take a walk in the woods and stop by a rotting log. It is decorated with mushrooms, and we faintly recall that fungus breaks down trees after they die. That's true as far as it goes. But the truth goes much further. These days scientists do not have to rely on their eyes alone to observe the fungus on a log. They can drill into the wood, put the sawdust in a plastic bag, go to a lab, and fish the DNA out of the wood. A group of scientists did just this in Sweden recently, sequencing DNA from 38 logs in total. They published their results this week in the journal Molecular Ecology. In a single log, they found up to 398 species of fungi. Only a few species of fungi were living in all 38 logs; many species were limited to just one. Consider that on your next walk in the woods. The one or two types of mushrooms you see on a log are an extroverted minority. The log is also filled with hundreds of other species that don't make themselves known to you. Their invisible exuberance is a paradox. The fungi that live on rotting logs all make a living by releasing enzymes that break down wood. It's puzzling that so many species can coexist in a log this way, instead of a single superior fungus. The forces that drive up the diversity of fungi in a log are similar to the ones that fosterer the thousands of species of microbes in our bodies. For one thing, a log or a human body is not a uniform block of tissue. They both have geography. A microbe adapted to the acid bath of our stomach won't fare well on the harsh desert of the skin. Likewise, what it takes to succeed as a fungus in a branch is different from what it takes in the heartwood of the trunk. The human body changes over time, and a rotting log does, too. Babies are colonized by pioneer microbes, which alter the chemistry of their host and make it more welcoming to late-arriving species. The pioneers on a fallen log may include the spores of some species of fungi lurking in trees while they're still alive. They burst into activity as soon as the tree crashes to the forest floor. Other species, delivered by the wind or snaking up through the soil, find it easier to infiltrate a log that's already starting to rot. The early fungi may go after the easy sugar in the log, while later species unlock the energy in tougher tissues, like lignin and cellulose. Which particular pioneer starts to feed on a log first can make it inviting to certain species but not others. Warfare also fosters diversity in a log. The fungi inside a log battle each other for food, spraying out chemicals that kill off their rivals. Each species has to balance the energy it puts into making enzymes to feed and weapons for war. Sometimes the war ends in victory for one species, but very often the result is a deadlock that leaves several species in an uneasy coexistence. There are more peaceful forces at work in a log, too. Many species of fungi in a log depend on each other. One species may feed on the waste produced by another, and supply another species with food in turn. The world in a log influences the world as a whole. If it wasn't for wood-rotting fungi, forests would be strewn with the durable remains of dead trees. When the first massive forests spread over the land 350 million years ago, fungi hadn't yet adapted to decomposing logs. Instead of turning to soil, many trees ended up as coal. The great age of coal ended about 300 million years ago--right around the time that tree-rotting fungi emerged. Their emergence may have brought the age of coal to an end. Three hundred million years later, that coal is coming back up to the surface of Earth to be burned. Some scientists are investigating fuels that could replace climate-warming ones like coal. One possibility is to pull out the energy-rich sugar locked up in the lignin and cellulose of crop wastes or switchgrass. On our own, we would not be able to perform the necessary alchemy. But fungi know how, and so scientists are sequencing the genomes of wood-rotting fungi to borrow their tricks. This is big-scale science: the genomes of over a dozen species have been sequenced or are in the sequencing pipeline. Yet a single log may contain twenty times more fungus genomes. At the moment, we can say for sure that the few mushrooms we see on a rotting log are far from its full reality. But it will be a long time before we know how all the parts of that reality fit together.