What Language Did the Vikings Speak?

An extinct language called Old Norse connected the Viking age, but linguistic remnants of their common tongue live on today. 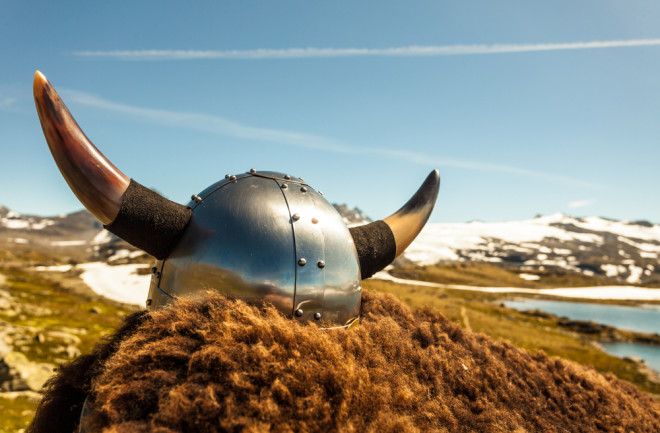 When the Vikings first began to spread out from their northern lands to raid and conquer large swaths of Europe at the end of the 8th century, they were aided by superior maritime skills and the development of sailing technology.

But how did they conceive their plans and communicate the intelligence over a vast swath of land stretching at one point from Newfoundland, Canada, to the eastern Baltic Sea? Surprisingly, a lot more easily perhaps than people living in those places today. After all, they spoke the same language back then.

“Old Norse emerges from around the 8th century and then is used throughout the Viking Age and then the medieval period,” says Kristel Zilmer, a runologist at the Museum of Cultural History in Oslo. “It was a shared common language in Scandinavia and in the islands in the north Atlantic settled by the Scandinavians."

Old Norse is still with us in English. Words like egg, knife, take and even husband were imported with Viking immigration and conquest over the years.

But where did this language come from and how was it used?

Old Norse didn’t come out of nowhere. It arose roughly in the early 8th century, several decades before the development of longships when the Viking Age really begins to kick off. Before this, Scandinavians spoke an older northern Germanic language often referred to as Ancient Nordic or Proto-Norse. This was the first language written in runic inscriptions, or the ancient Scandinavian alphabet containing about 24 letters and referred to as Elder Futhark.

The oldest such writing yet discovered dates to roughly A.D. 150. The writing is found on a small comb carved out of bone discovered in Denmark. Zilmer says that linguists typically believe that the language arose before then, probably sometime in the first century AD.

Elder Futhark continued to be used until roughly the 700s. During this period, runic letters were inscribed on leather, antlers and other bone artifacts, metal — and the famous runestones. The first of the latter showed up in roughly the 4th or 5th century, but they began to become much more common in the preceding centuries.

Around the beginning of the 8th century, Scandinavians chopped down their alphabet, combining sounds like K with G, and B with P to leave them with a simplified 16-letter runic alphabet. Researchers have found more than 3,500 runic inscriptions from the Viking Age, Zilmer says. But the simplification didn’t make things easier for researchers — runes in the later period are actually easier to misinterpret due to the letter combinations.

These changes in alphabet were also accompanied by changes in the sound of the language. New words were introduced and new vowel and consonant sounds began to appear between roughly 500 to 700. Many of the relatively long words of Ancient Nordic were shortened. “It’s very thoroughly restructured,” Zilmer says.

Some of the best known examples of runic inscriptions are spread all across Europe from near the Black Sea in Russia to Normandy and all over the British Isles. These raised stones typically are covered in runic inscriptions, sometimes accompanied by artwork. Zilmer says that while their inscriptions can vary, they are often commemorative, listing the names of dead family members, friends or trading partners. Given the size of the stones, the inscriptions usually aren’t that long. They might state who put the stone up and in whose memory, with perhaps a short note about the farm they held.

A runestone in Sweden carved a thousand years ago by Vikings. (Credit: Mats O Andersson/Shutterstock)

A few runestones have lines of verse. Norse gods like Thor or Odin are sometimes mentioned as well in the earlier period. After Scandinavia became Christianized starting in the 11th century when Vikings began to bring the religion of some of the lands they conquered back to their home, runestones sometimes contained prayers for the soul of the dead family members or friends.

Runestones and other runic inscriptions are really one of few sources we have about the Vikings from the Vikings. Most of the lore surrounding Viking raids and other exploits come to us via the accounts of other Europeans on the brunt end of their attacks.

“Runic inscriptions are the type of source that originates from the time,” Zilmer says. “They are in a way the most direct glimpses that we get into their society at the time.”

While Old Norse was the language that connected the people of Scandinavia during the Viking Age, the international nature of the Nordic countries at that time would have required polyglots — they didn’t always raid first and ask questions later.

“Many people and communities at that time would have been multilingual,” Zilmer says.

As some of the Vikings conquered land in Britain and elsewhere, they brought their language with them. Over generations, Old Norse was blended with local languages. Old English has a lot of Norse influence, for example, and many place names in Britain today come from Old Norse.

“The language contacts had been quite intense,” Zilmer says.

While Old Norse is considered one language, the tongue clearly had dialects that differed between places like Denmark and Iceland, she says, though people in those areas could likely still understand each other. Many of these differences widened during the late Middle Ages, becoming something more similar to the languages spoken in those countries today.

But other things characteristic of Old Norse and its predecessor began to disappear due in part to the international nature of the Vikings. The Roman alphabet was introduced to Scandinavia in roughly the 11th century as Christianity was adopted. Some Vikings would also likely have learned the alphabet during their raids and trade missions in the rest of Europe. Both the runic alphabet and the Roman were used side by side for a couple hundred years before the latter took over. The last runestones date to roughly the 14th or 15th centuries, Zilmer says.