The question is more philosophical than physical — which means we can redefine it on our own terms. 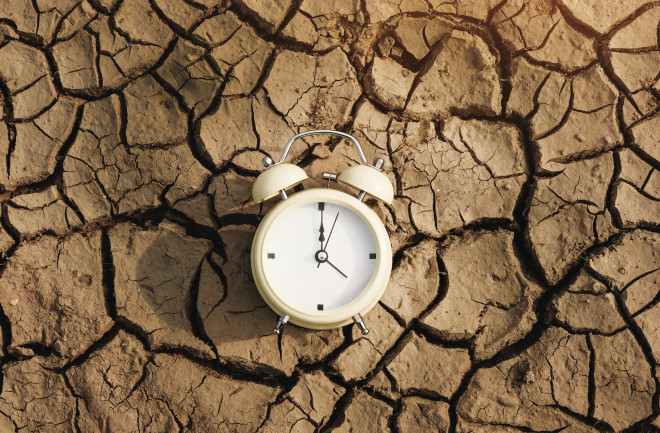 In 1826, time took a strange turn in New Haven, Connecticut. According to historian Michael O’Malley, over several months, a new clock installed atop Town Hall ran slow and then fast in comparison with the clock that had set the local standard time for decades, at nearby Yale College. After cursing the clockmaker, the citizens discovered that both clocks were accurate, but each kept time according to a different principle: The old clock at Yale had complicated gearwork that varied in speed with the seasons to emulate the time indicated on a sundial, which shifts with Earth’s annual orbital wobble. The more modern timepiece turned at a steady rate, like my wall clock does today.

Time defies easy definition. Early fifth-century philosopher St. Augustine of Hippo famously wrote that he knew what time was unless someone asked him. Albert Einstein added another wrinkle when he theorized that time varies depending on where you measure it. Today’s state-of-the-art atomic clocks have proved Einstein right — there’s actually a detectable difference between a clock in an airplane and one on the ground. Even advanced physics can’t decisively tell us what time is, because, as the residents of New Haven learned, the answer depends on the question you’re asking.

Forget about time as an absolute. What if, instead of considering time in terms of astronomy, we related time to ecology? What if we stopped timing planetary phenomena from an outside perspective — expecting the world to run like clockwork — and allowed environmental conditions to set the tempo of human life? We’re increasingly aware of the fact that we can’t control Earth systems with engineering alone, and realizing that we need to moderate our actions if we hope to live in equilibrium. What if our definition of time reflected that?

Recently, I conceptualized a new approach to timekeeping that’s hitched to circumstances on our planet, conditions that might change as a result of global warming. We’re now building a clock at the Anchorage Museum that’s calibrated by the aggregate flow of several major Alaskan rivers, including the glacially sourced Matanuska and Knik, which are sensitive to local and global environmental changes. We’ve programmed it to match an atomic clock if the waterways continue to flow at their present rate, as measured by the U.S. Geological Survey. If the rivers run faster in the future on average, the clock will get ahead of standard time. If they run slower, you’ll see the opposite effect. As a simple mental picture, imagine a clock with gears connected to a waterwheel instead of a motor.

Marcus Aurelius once said time is like a river. A project at the Anchorage Museum takes that one step further, with an actual clock that ticks according to the flow levels of Alaska rivers. (Credit: Anchorage museum/Alaskarivertime.org)

The clock registers both short-term irregularities and longterm trends in river dynamics. Fluvial variations are visible in terms of hourly fluctuations, and the years may drift away from the Gregorian calendar. It’s a sort of observatory that reveals how the rivers are behaving from their own temporal frame, and allows us to witness those changes on our smartwatches or phones. Anyone who opts to go on Alaska Mean River Time will live in sync with the planet. Anyone who considers river time in relation to atomic time will encounter a major disequilibrium and may be motivated to counteract it by consuming fewer fossil fuels or supporting greener policies.

Even if this method of timekeeping is novel in its particulars, early agrarian societies also connected time to natural phenomena. In pre-Classical Greece, for instance, people “corrected” official calendars by shifting dates forward or backward to reflect the flowering of artichokes or the migration of cranes. Temporal connection to the environment was paramount to their survival. Likewise, river time — and other systems I’m developing that will pace clocks to match the growth of trees or the circulation of oceans — may encourage environmental awareness in a world increasingly alienated from nature.

When St. Augustine confessed his inability to define time, he evoked one of time’s most salient qualities: Time becomes meaningful only in a defined context. Any timekeeping system is valid, and each is as meritorious as its purpose.