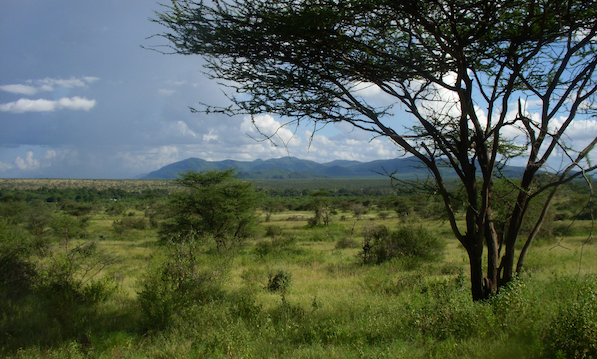 To understand how we evolved, we have to understand where we evolved. Natural selection exists because the environment is kinder to some individuals than others. Depending on the species, that environment may be a lake miles underneath Antarctic ice, an alpine meadow near the top of a mountain, or an oxygen-free swamp in the sweltering tropics. Each habitat creates its own set of conditions in which individuals thrive or die. We humans are no different. We are the product of where we have lived. A century ago, paleontologists thought humans evolved in Central Asia. At the time the only known fossils of an ancient human relative (what we now call a hominin) came from Indonesia. The idea of humans evolving in dank rain forests did not appeal to Western scientists who lived in temperate climes. They looked to Central Asia's windswept plains. In 1926, the American paleontologist Henry Fairfield Osborn laid out this line of thinking in an essay called "Why Central Asia?" "In that environment, the struggle for existence was severe and evoked all the inventive and resourceful faculties of man," he wrote. "While the anthropoid apes were luxuriating in the forested lowlands of Asia and Europe, the Dawn Men were evolving in the invigorating atmosphere of the relatively dry uplands." It's hard to imagine worse timing for such a declaration. In 1925, the year before, Raymond Dart discovered the skull of a another hominin in South Africa. It was much older than the one in Indonesia, and it was a lot more ape-like. And since then, paleoanthropologists have found many more fossils of very old hominins in Africa, from South Africa to Kenya and up to Ethiopia and Chad. Hominins first split off from the ancestors of chimpanzees and bonobos (both found only in Africa) about seven million years ago. The oldest hominin fossils date back to about that age, and from seven million to 1.8 million years ago, the fossil record was exclusively African. Only then did hominins start popping up in places like Indonesia and the Caucasus Mountains. Hominins also continued to inhabit Africa, and evolve into new species. The first fossils of Homo sapiens, dating back about 200,000 years ago, are from Ethiopia. While Osborn was wrong about the place where humans evolved, his vision of the invigorating atmosphere of dry uplands survived. Dart himself wrote in Nature that South Africa offered the same challenging grasslands as Central Asia. "We must therefore conclude that it was only the enhanced cerebral powers possessed by this group [us] which made their existence possible in this untoward environment," Dart concluded. For humans to split off from apes, he wrote, they required "a more open veldt country where competition was keener between swiftness and stealth, and where adroitness of thinking and movement played a preponderating role in the preservation of the species." Dart offered an early version of what came to be known as the "savanna hypothesis"--that moving from the forests to open grasslands drove the evolution of the hominin lineage, including the evolution of walking upright, a big brain, and even the loss of body hair. In the decades that followed, scientists tried to reconstruct the ecosystems in which hominins lived. Plant fossils were scarce, but in many cases--particularly in the Rift Valley of East Africa--these studies pointed to open, savanna-like environments. By the 1990s, however, things started to get confusing. James Shreeve, writing in this 1996 Discover article , explained how paleoanthropologists were finding evidence that the early hominins might actually have lived in more closed woodlands. The debate rolled on, fueled in part by the scarce information scientists had to rely on. Eighty-six years after Dart first presented the savanna hypothesis in Nature, the journal has now published a spectacular chronicle of the environment in which our ancestors evolved. Thure Cerling of the University of Utah and his colleagues found a way to overcome the scarcity of plant fossils. Plants absorb carbon from the atmosphere to build their wood, stems, and leaves. Carbon in the atmosphere may have different numbers of neutrons--it may be isotopically "heavy" or "light." Different kinds of plants will end up with a different balance of light and heavy carbon in their tissues. When the plants die, they add their carbon isotopes to the soil. And the soil itself can sometimes turn to rock--a substance known as a paleosol. Cerling and his colleagues went to African forests and grasslands and measured the carbon isotopes in the soils. They found they could accurately predict the percentage of woody plant cover from the isotopes alone. With this method in hand, they then analyzed 1300 samples of paleosols that formed over the past seven million years from two sites that have yielded some of the richest troves of hominins: the Awash Valley in Ethiopia, and the Omo-Turkana Basin in Kenya. The result is a "tour de force," according to Harvard paleoanthropologist Daniel Lieberman (who was not involved in the study). Here is a massive graph summarizing their findings, which will become the benchmark against which future studies of hominin evolution will be measured. The further to the left the curves are, the more wooded the habitats. The further to the right, the more open they were. In between are bars showing the age of different hominin fossils. The further to the right the bars are, the more small-brained and big toothed they are. The more to the left, the more like us they are. (You can see a bigger version of the graph here.) Once you've grokked this image, join me at the bottom for an explanation of what it all may mean. 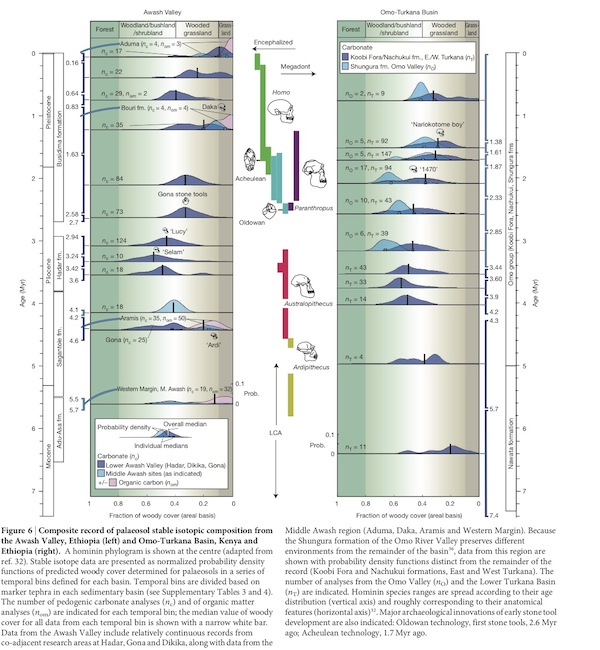 Cerling and his colleagues have found that seven million years ago, grasslands with sparse trees existed at these sites. The woody cover increased over the next few million years, reaching its greatest extent about 3.6 million years ago, when the sites were 40-60% woody cover. Then the woods began to retreat. By 1.9 million years ago, there was no place left with more than half woody cover. The environments continued to open up, the trend continuing till today. I asked Lieberman, who studies the evolution of human anatomy, how he thinks hominin evolution played out against this ecological backdrop. "Chances are we split from other apes in the forest," Lieberman told me. He notes that chimpanzees, bonobos, and gorillas all live in the forest today. The fact that we don't find early forest hominins is probably due to the fact that closed forests are lousy places for fossils to form. It's probably no coincidence that scientists have found practically hardly any fossils of chimps or gorillas. They've lived in the wrong place. Another crucial fact to consider is that the earliest known hominins have a number of features that hint that they were no longer knuckle walkers. A number of researchers argue that while they couldn't walk as fast as we can and probably couldn't run at all, they were already bipedal. So even though the earliest hominin fossils come from lightly wooded East African grasslands, Lieberman suspects that the origin of bipedalism took place earlier, and it took place in forests elsewhere on the continent. (Another paleoanthropologist, John Fleagle, expressed a similar sentiment to me.) Lieberman suggests that the earliest hominins adapted to the margins of those early forests, where they had to travel further from tree to tree to find fruit. He and his colleagues have found that it's four times more efficient for a human to walk a given distance than it is for an ape to knucklewalk. Saving energy on these trips could have translated into more babies. By about seven million years ago, studies like Cerling's now suggests, hominins were already moving around on two legs through open woodlands. Hominins evolved to be more efficient walkers. They also acquired big teeth and jaws. Lieberman argues that hominins need this new mouth equipment so that they didn't have to rely on fruit alone. They could also chew on harder, tougher plants like tubers, which served as fall-back foods in the open woodlands. Although tree cover increased for a couple million years, forests never came to dominate the East African landscape in the past seven million years. And when open grasslands returned with a vengeance, hominins underwent a dramatic change. They got tall and acquired traits that Lieberman argues were adaptations for running. Their teeth and jaws got small; their snouts disappeared. Lieberman argues that this change marks a new way in which hominins coped with the increasing grasslands: they became hunter-gatherers, traveling long distances to stalk game. And once they began to enjoy this high-protein diet, one more change occurred: the energy-hungry hominin brain was able to expand towards its current size. But he is quick to point out that there are some important facts about hominin evolution that don't fit neatly into the scenario he sketched out for me, and a lot of other crucial facts thtat remain to be discovered. "Anybody who isn't confused doesn't know what's going on," he said. At least scientists now have a better backdrop for finding out exactly what did happen on the way to Homo sapiens. [Image: Samburu National Reserve in Kenya, Thure Cerling, University of Utah]