Solving the mystery of marijuana's skunklike aroma could make cannabis producers better neighbors, and might help profits, too. 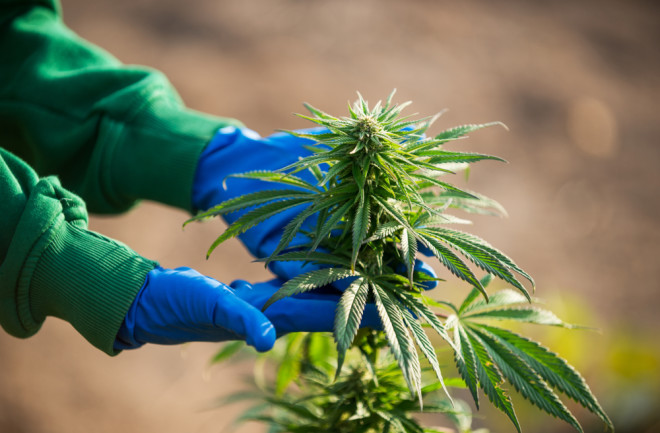 How cannabis smells and why it smells that way matters in ways you may have never imagined.

In Sonoma County, California, residents sued to ban commercial cannabis operations from their neighborhoods. “It’s as if a skunk, or multiple skunks in a family, were living under our house,” a Sonoma County resident told The New York Times in 2018, referring to a neighboring cannabis-growing business.

Among recreational users, cannabis varieties that are skunk-forward are among the most popular formulations, making recipes that favor a skunky aroma valuable to cannabis companies. Drug-detection dogs are sometimes trained with synthetic odors instead of the real thing, according to forensics researchers familiar with police techniques. When even a false positive can upend someone’s life in states where cannabis is illegal, it’s important to get it right. But nobody really knows which specific chemical compounds gives cannabis that skunky smell, says cannabis terpene expert Ethan Russo, a neurologist who is the founder and CEO of CReDO Science, a company commercializing patented products derived from cannabis.

Or maybe the people who know just aren’t telling, since there are profits on the line. While there are no certain answers, there are however, some strong theories. Among the hundreds of chemical compounds in cannabis, there are only a few classes of chemicals that are seriously considered as the source of cannabis’s skunky aroma.

Let’s start with skunks, the animal. Their stench primarily comes from seven major chemical components that William Wood, a chemist at Humboldt State University, worked out in 1989. Three thiols were the stinkiest compounds of the bunch. Thiols are chemical compounds that are similar in structure to alcohols, but have a sulfur atom where the oxygen atom is in an alcohol.

Thomas H. Shellhammer, Nor'Wester professor of fermentation science at Oregon State University, is no stranger to thiols. Shellhammer is an expert on hops, a plant whose flower gives flavor, acts as a preservative, and, as it turns out, is responsible for that occasional “skunked” beer.

Shellhammer explains that when ultraviolet light hits the humulone, a part of the molecule breaks off and binds with the sulfur in the beer, creating the thiol. “If you walk outside with a nice yellow beer like a pilsner on a summer day, the change is happening almost immediately,” he says.

He adds that in Europe and elsewhere, this is known as “light-struck” beer, not "skunky" beer, since skunks are not native to Europe.

Complicating matters is the fact that humans can smell thiols in parts per trillion, Shellhammer says. We perceive the other aromatic components of beer at parts per million. A tiny bit of thiol can overwhelm everything else.

Both hops and cannabis naturally produce thiols. They also both produce some of the same terpenes, fragrant chemical compounds, including humulene (which is not chemically related to humulone), caryophyllene and myrcene.

That’s because hops and cannabis are in the same plant family, Cannabaceae. If you analyze the oils extracted from each plant chemically, Shellhammer says, they are similar. “When we analyze the compounds in hops,” Shellhammer says, “Sometimes I walk by the lab and it smells like we are analyzing cannabis.”

Commercial cannabis producers also spend a lot of time analyzing their product to provide particular medical properties, flavors, aromas, and recreational experiences. Asked what puts the skunk in its company’s Lemon Skunk cannabis strain, an unnamed customer service representative at the Amsterdam, Netherlands-based DNA Genetics replied, “The answer is terpenes. Terpenes exist in everything you taste and smell.”

Shellhammer says that the terpenes in hops, which are similar to the terpenes in cannabis, never add up to or break down into a skunky smell. It’s the unrelated humulone that does that, he says.

But terpenes are interesting compounds. They are biologically active in tiny amounts, says Russo. And they can have different effects in different amounts.

Consider pinene, a terpene which is found in pine trees (and also in tiny quantities in cannabis). Walking through a pine forest, you might be aware of a freshness in the air thanks to the pinene, but not a distinct odor. In larger quantities, such as in a car air freshener, you will be aware of the pine odor of the pinene. But open a gallon container of turpentine, which is more than 80 percent pinene, and you will experience a harsh odor, and maybe some dizziness and nausea. (Only use turpentine with good ventilation. It’s a poison.) It’s the same terpene, but a different experience, depending on the quantity.

Could the same effect be happening with cannabis? When Herbert Fuego, a columnist for Denver’s Westword was asked by a reader what causes the skunk smell in cannabis, he wrote: “Myrcene, a common cannabis terpene also found in hops and mangoes, can smell so similar to a Pepé Le Pew love trail that one of the most coveted weed strains is simply called ‘Skunk.’”

The DNA Genetics customer service rep, consulting with company researchers, agrees that terpenes alone are responsible, not thiols like those found in actual skunks. “We don’t think there is any relation between the strain and the animal. We believe the animal stench is based around sulfur and the strain is based around these terpenes.”

Better understanding the chemistry behind cannabis’s skunky odor could help the neighbors of cannabis growers. In California, when some growers installed an odor neutralization system specially designed to counteract the terpenes in cannabis, some neighbors sued, the local Coastal View newspaper reports. Among other problems, the newspaper says, the neighbors didn’t like the new “laundry detergent” smell either