What colours were dinosaur feathers? 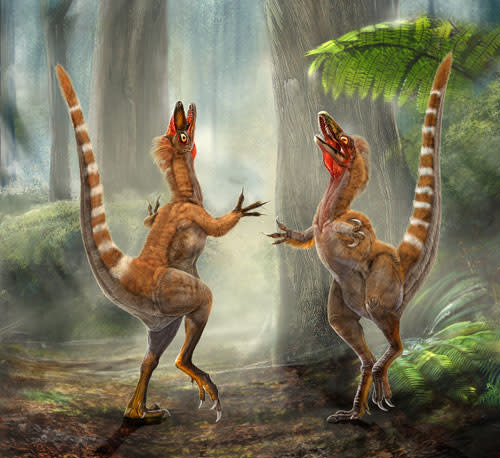 Dinosaur books have become more colourful affairs of late, with the dull greens, browns and greys of yesteryear replaced by vivid hues, stripes and patterns. This has largely been a question of artistic licence. While fossils may constrain an artist's hand in terms of size and shape, they haven't provided any information about colour. But that is starting to change.

The fossils of some small meat-eating dinosaurs were covered in filaments that are widely thought to be the precursors of feathers. And among these filaments, a team of Chinese and British scientists have found the distinctive signs of melanosomes, small structures that are partly responsible for the colours of modern bird feathers.

Melanosomes are packed with melanins, pigments that range from drab blacks and greys to reddish-brown and yellow hues. Their presence in dinosaur filaments has allowed Fucheng Zhang to start piecing together the colours of these animals, millions of years after their extinction. For example, Zhang thinks that the small predator Sinosauropteryx had "chestnut to reddish-brown" stripes running down its tail and probably a similarly coloured crest down its back. Meanwhile, the early bird Confuciusornis had a variety of black, grey, red and brown hues, even within a single feather.

Zhang's discovery also launches another salvo into a debate over the very nature of "feathered" dinosaurs. Beautiful fossils, mainly from China, show that several species of dinosaur had feathers akin to the flight-capable plumes of modern birds. Species like Caudipteryx and the four-winged Microraptor had true feathers with asymmetric vanes arranged around a central shaft.

Other species, such as

had far simpler filaments ("dino fuzz") covering parts of their skin. These are more controversial. Many groups view these filaments as proto-feathers, the evolutionary predecessors to the fine plumage of birds. But a small minority still interpret them as degraded strands of collagen, a protein that strengthens animal skin. 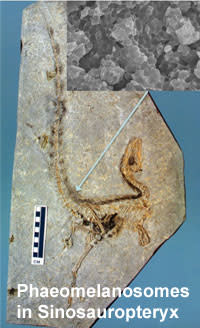 But if Zhang is right, it may be game over for the collagen hypothesis. His study shows that melanosomes have been preserved in the same way in the filaments of Sinosauropteryx as they were in the true feathers of early birds. It's evidence of a link between the two structures.

Under the extreme magnification of an electron microscope, Zhang looked at the filaments of the dinosaurs Sinosauropteryx and Sinornithosaurus, as well as the true feathers of the early bird Confuciusornis. The microscopes revealed a number of small structures all less than a micrometre long. In shape and size, they are identical to the melanosomes of modern birds. There include two broad categories. The phaemelanosomes are almost spherical in shape and produce phaeomelanin, a reddish-brown or yellow pigment, while the eumelanosomes are more rod-like and produce black-grey eumelanin. 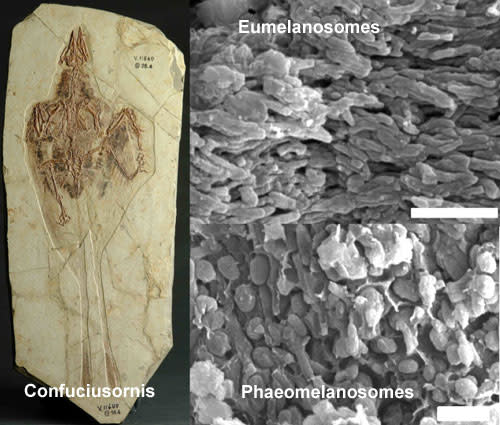 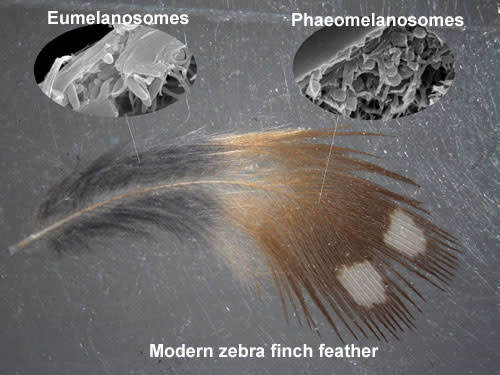 Melanosomes are remarkably resilient structures. They're more resistant to both chemical and physical decay than the keratin of feathers and hair. Nonetheless, critics will undoubtedly argue that these microscopic structures weren't melanosomes at all but bacteria, whose cells have since been replaced by sediment. Zhang is prepared for that, and has put forward several lines of evidence to answer his sceptics.

For a start, they appear inside the feathers and filaments, rather than sitting outside them in a thin film. They're also found in the same parts of the fossils as they are in modern feathers. They're arranged in the same pattern - the eumelanosomes, in particular, are "densely packed and strongly aligned". In some cases, the fossil feathers are clearly striped by bands of pigment and the alleged eumelanosomes only turn up in the dark ones, just as you'd expect. There's no reason for bacteria to have been so evenly spaced - they would more likely have formed a uniform film over the entire structure.

Zhang is ruthless in his interpretation, saying that the melanosomes make it "unequivocally" clear that these filaments were not strands of collagen. Instead, they "are probably the evolutionary precursors of true feathers". And now we're starting to have an idea of what colour these precursors were.

This isn't the first time that fossilised melanosomes have been used to work out the colour of extinct species. In 2008, Jakob Vinther from Yale University found these pigmented structures in the fossil feather of a Cretaceous bird, and concluded that it probably had black and white stripes. Last year, Vinther reported that the layers of melanosomes in another fossil feather would have given it an iridescent sheen, much like the gloss on the wing of a starling. Carl Zimmer covered the story for the New York Times.

Both of Vinther's papers talk about the possibility of using the same technique to reconstruct dinosaurs in accurate Technicolour. Now, it seems that this hope is becoming a reality. But while Vinther is convinced by the melanosomes that Zhang has found, he's more skeptical about the inferences about colour. "Saying that Sinosauropteryx was rufous-red, based on one sample is a stretch," he says. We don't even know how melanosome distributions in modern birds lead to specific colours. "Without this knowledge quantified, we cannot predict specific colors in fossils, maybe except black. So we are still far from putting colors on dinosaurs."

However, Vinther remains optimistic. "I can only say that the future is promising. Eventually we will have dinosaurs in technicolor. We are working seriously on that currently."

Working out what colour dinosaurs were isn't just a matter of nerdy curiosity. The colours of a bird's feathers affect its ability to keep cool, camouflage itself from predators or prey, and communicate with mates and rivals. In this way, a better understanding of dinosaur colours could give us more clues about how these most evocative of animals lived.

Mike Benton, a co-author on the new study, says, "In Sinosauropteryx at least, essentially the most primitive dinosaur with feathers, the possession of an orange and white striped tail says 'display' of some kind, but whether for warning or pre-mating contests, we couldn't say."