What Brian Williams and bumblebees have in common 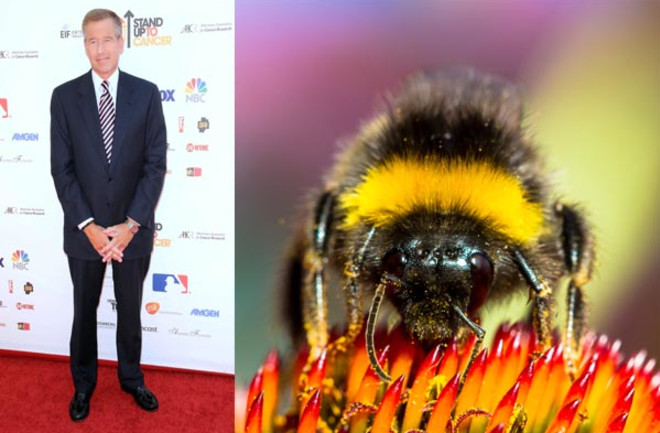 They both enjoy a red carpet? No, that's not it... Journalists are held to the highest standards of accuracy, which is why so many seemed shellshocked to learn that Brian Williams, beloved NBC Nightly News anchor, lied about his experiences in the Iraq war. In his most recent accounts, Williams claimed to have been in a helicopter shot down by enemy fire — a claim that was vocally disputed by veterans who were with Williams at the time. Williams has since admitted that he got the story wrong, but what's most intriguing about his apology is the seemingly-genuine level of remorse and confusion he displayed. “I would not have chosen to make this mistake,” Williams told Stars and Stripes as a part of his retraction. “I don’t know what screwed up in my mind that caused me to conflate one aircraft with another.” Scientists do. If we assume that Brian Williams didn't intend to mislead, then it's actually not that hard to explain why he'd genuinely recall something that never happened. False memories are a fairly well-known phenomenon in human memory research. Early experiments found that people readily remembered things that never existed, like a word on a given list. In more nuanced experiments since, scientists have been able to convince study participants that they were lost in a mall as a kid, had been on a hot air balloon ride, and even committed a crime. In each case, the participants really remembered the events, even though they were completely fake. So it's not that far of a stretch to think that, after repeating the stories of riding in a helicopter and of another helicopter being hit over and over, Williams got confused and merged his two long-term memories. According to Lars Chittka, a professor of behavioral and sensory ecology at Queen Mary University of London, "It's psychologically perfectly possible." Chittka's research recently discovered that Williams is not alone: bumblebees, too, experience a similar failure of memory integrity. While researchers have focused a lot on the shortcomings of human memory, less attention has been paid to whether other species which rely on their recollection have similar problems with long-term memory. But if our false memories are a side-effect of the way in which we remember things, it stands to reason that other species would have the same, ingrained flaws. Yet no one had shown any other species to have minds as fallible as our own. No one had, that is, until Chittka and his then-student Kathryn Hunt decided to find out. In a paper published this week in the journal Current Biology, the pair explain how bumblebees (Bombus terrestris) also generate false memories. Bees, as it turns out, are very trainable. If you offer a reward in the center of a given color or pattern, they will return to that "flower", or target, over and over. They can even distinguish colors and patterns. So Chittka and Hunt trained bees to prefer two patterns in succession - a solid color and a black-and-white pattern. When they tested their trained bees shortly after, they always remembered the most recently rewarding target. But if the researchers waited one to three days — making the bees rely on long-term memory, considering they live only a matter of weeks — the bees did something very different. Instead of going for either of the trained flowers, they would choose a third option that they'd never seen before: a combination of the color and the pattern they were trained on.

Artwork depicting a bee making the tough choice between targets, designed by Nicole Milligan and Ray Crundwell. In memory research, it's known as a "memory conjunction error". "Essentially, you merge memories that have been acquired in separate experiences into one." This is the first time anyone has demonstrated false memories "not just in bees, but in any animal" explains Chittka. And not just a few of the bees were tricked into creating false memories — as Chittka phrased it, "We were able to confuse all of our bees." Such false memories could have serious impacts on the bees' daily life. "It might be somewhat surprising for people who think dismissively about small-brained insects, but bees have to juggle lots of memories over a lifetime," says Chittka. They have to recall where their hive is, for example, as well as where different flowers are and how much nectar each of those flowers provided. Thus, a fallible memory may effect how well they forage, which impacts not only themselves but the colony as a whole. Picking a novel flower might harm the bee if it doesn't provide as much nourishment as the one they intended to remember, but such an error may also end up working out, if the new flower is better than the one they didn't realize they forgot. Chittka and his lab are now looking at lifetime flower choices in light of this new information to see how the bees' mistaken memory effects them over the course of their lives. "We just got some very generous funding to radar track individual bees over their lifetime under field conditions," Chittka explained. They will be glueing little transponders onto bees and watching where they go. "That will allow us to track not only which kinds of flower species they visit but also how they apply memories from their past experience towards discovering and exploiting novel food resources, and in the process, possibly studying how little memories in their minds get merged." While merging is referred to as a "error" in memory, Chittka thinks this kind of false memory may actually be adaptive. "Many people view such memory malfunctions in humans as simple flukes in the system," Chittka says. "We're under the impression that memory normally is near photographic," Chittka explained "and that information either is or is not in memory, so if it's not there, it's just forgotten." But that's not really how our minds work, says Chittka, and that's a good thing. "While false memories aren't in themselves adaptive, they might be byproducts of otherwise useful memory functions." "You often want to extract what's common to many different experiences, and create a rule from that, which you can then use towards finding reliable patterns in your environment," Chittka explains. Humans rely on pattern recognition to categorize and make assumptions about novel objects and experiences. False memories are our minds way of condensing information, to assign traits like "edible" or "dangerous" to things we encounter even if we've never seen that specific plant or animal before. Our creation of false memories may also be a question of hard drive space. "Memorizing something that's common to many visual patterns or episodes in your past experiences requires less storage than each episode individually," Chittka says. "So in addition to it being a useful ability to extract common things, patterns, and rules, from your environment, it's also optimizing storage capacity." "That of course applies even more to animals with little brains such as bees, where the neuronal hardware dictates that your memory storage capacities will be lower than large brained animals such as humans." Research into how false memories are made and under which circumstances they occur may not only help us understand the behavior of bees, it may also shed light on our own less-than-perfect moments of recollection. Eye witness testimony is still highly regarded in court cases despite its unreliability, for example; to be able to better understand how, when, and why false memories occur could be invaluable to our justice system. Journalists, too, would benefit from increased confidence in their own memories, starting with Brian Williams*. Perhaps by studying false memories in animals and humans, scientists will eventually develop a sort of litmus test that can differentiate the past from the parts our minds fill in. Until then, it's always good to keep in mind that just because we remember something doesn't mean it happened. Citation:

*Of course, Brian Williams is hardly the only journalist to be called out for misstatement of the past. Bill O'Reilly, on the other end of the media political spectrum from Williams, also seems to have misremembered details about his war coverage and his presence at a political suicide. Are these inaccuracies are false memories or intentional embellishments? The jury is still out...