What are you looking at? People follow each other’s gazes, but without a tipping point 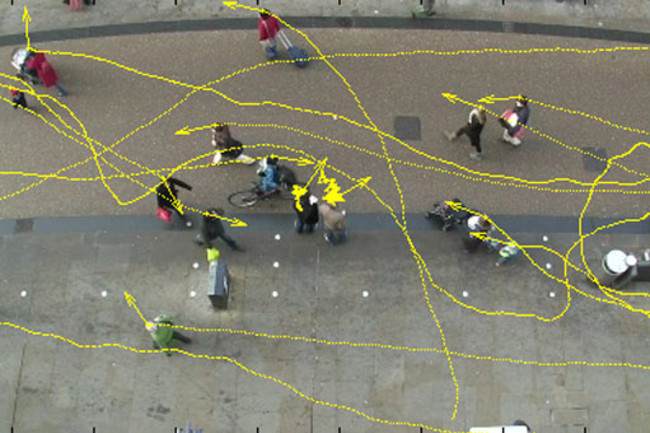 On an uneventful day, five passers-by in busy Oxford shopping street suddenly stop and look upwards. They have spotted a camera mounted on a nearby roof, pointed straight at them. But these aren’t strangers who have suddenly realised that Big Brother is watching them. They are actors, who are taking part in a natural experiment that looks at how information spreads through crowds of people.

Andrew Gallup from Princeton University is behind the camera. Using its lens, and technology based on the video-gaming graphics cards, he can track the movement of each pedestrian, and calculate where they’re looking. With this set-up confirmed that people have a natural tendency to look where others are looking. But this contagion of glancing is much weaker than popular psychology books would have us believe.

Many psychologists have studied how humans and other animals follow each others’ gazes. But the vast majority of these studies have been done in laboratory settings, in which volunteers sit face-to-face. Very few scientists have studied natural crowds of people.

Stanley Milgram (he of the famous obedience experiment) was one of the first. In 1969, he asked groups of actors to stop in a busy New York City street and stare up at a building window. As the number of actors increased, so did the number of passers-by who copied their behaviour.

Gallup’s first experiment is a modern riff on Milgram’s. He filmed how pedestrians reacted when actors – ranging in size from individuals to 15-strong groups – stopped for a minute and stared at a building-mounted camera. When Milgram did this, he could only count the proportion of people who followed the actors’ gaze. But Gallup used modern technology to track every single passer-by, including their movement, speed and distance to others. He also hired volunteers via Amazon’s Mechanical Turk to check that the software was doing its job.

So far, so predictable. But Gallup’s data held some surprises. For a start, passers-by were more likely to mimic the actors if they were standing behind them, or off to the side. If they were walking towards the actors, they were around half as likely to look up. This suggests that they’re not following social pressure. As the team had shown once before, gaze direction flows more effectively behind us than in front of us.

More importantly, the study refuted a common interpretation of Milgram’s data. It’s often said that crowds slowly copy each other’s gaze until they reach a certain threshold when, very suddenly, almost everyone looks in the same direction. This is known formally as a “quorum-like response”. Colloquially, it’s a tipping point. Animals that live in flocks, herds and shoals often make decisions like this, so they can keep moving in the same direction.

But that’s not what Gallup found. He showed that the proportion of passers-by who look up gradually increases, and saturates well below the point where everyone does the same thing. The graph is much less dramatic.

“There is not nearly as strong copying behaviour as people previously thought based on the inherently limited Milgram data,” says Iain Couzin, who led the study. “We demonstrate that those data have been misinterpreted.” The tendency to look where someone else is looking may “serve an adaptive function” in terms of directing people to important information, but “it is not so strong that individuals get drawn into blindly copying.” 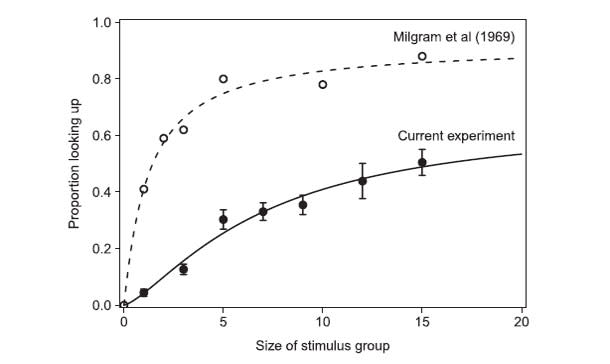 “This field experimental approach is very welcome,” says Andy King from the Royal Veterinary College, who also studies group behaviour. “It gives us real quantitative insight into crowd behaviour.” However, King wonders if the crowd in the first experiment would show a more dramatic tipping point if they were staring up at something, like a model bird. (The camera was hidden from view.) “Schooling fish, or ant colonies that adopt quorum-like responses all do so in a context where they are making a choice about something,” he says. Maybe glances would spread more rapidly through a crowd if that crowd had something to glance at.

In his second experiment, Gallup did give the crowd something to look at. He asked two actors to stand in either a train station or the same shopping street as before, and act either naturally or suspiciously for a minute. In the latter scenario, they would sketch a map of their surroundings, or hold a video camera at their waist as if they were covertly filming the setting. Once again, Gallup filmed the crowd’s reactions.

Again, the crowd’s gaze was contagious, but only weakly so. It also varied in the two contexts. In the street, passers-by of both sexes looked at the suspicious individuals more often than the natural ones, and they were more likely to do so the closer they stood. But in the station, where the crowd was denser, things were different.  “Men actually avert their gaze from suspicious individuals, whereas women tend to behave as they did in the main street,” says Couzin. And the closer they got, the more they looked away.

The experiment showed that the eyes of a crowd can provide valuable information, even without an obvious tipping point. As an onlooker, it is very hard to spot suspicious individuals in crowds because people behave in varied ways. But people within the crowd are naturally tuned to spot irregular activities. Through the collective directions of their eyes, they provide information about unusually activity. “We can think of a crowd as a sensor array,” says Couzin.

However, tapping into that array is hard. As the second experiment showed, there are important differences between the two genders, and between different locations. In some cases, you might want to look where the crowd is staring; in others, you might focus on areas they are looking away from. Gallup also points out that the crowd’s behaviour changed at very subtle time scales. On average, the men in the station looked away from the suspicious people, but there were small chunks of time, just seconds long, when they collectively turned at the actors.

For now, it’s unclear why these patterns exist. The actors in the second experiment were both men; if they were women, the crowd may have behaved differently. Gallup’s team plan to study these subtle variables in future experiments. “Doing a real ‘field experiment’ on people has many advantages, but it is inevitably more limited than controlled lab studies when trying to infer the underlying psychology for the patterns observed,” says Couzin. His team are now planning studies to untangle these subtle effects. 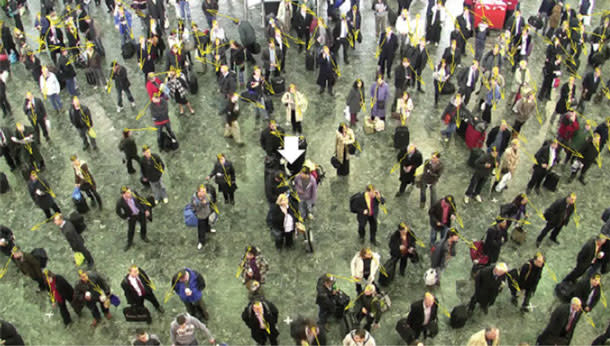