Whale Lice Offer Links to Past 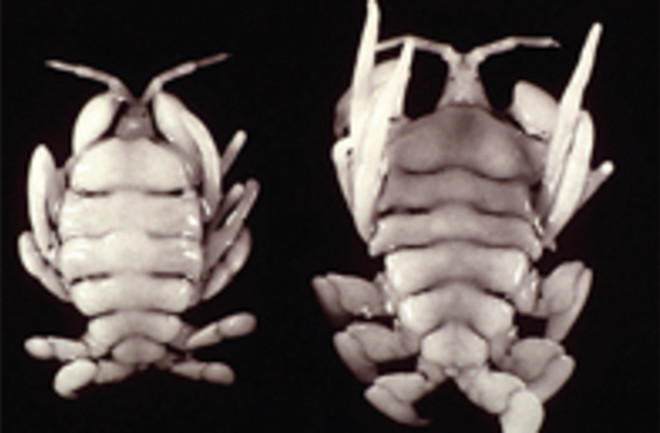 Cyamids are actually harmless crustaceans about three-fifths of an inch long. About 7,500 of them live on a single 70-ton right whale. | Courtesy Victoria Rowntree, University of Utah

For an epic story of whales and whaling, one need not turn to a 19th-century novel. Their travels and travails are coming to light through the genes of a parasite—the whale louse.

Three distinct populations of right whales roam the seas today: in the North Pacific, the North Atlantic, and the southern oceans. Their shared history was unclear until Jon Seger, an evolutionary geneticist, and his wife, whale biologist Victoria Rowntree, both at the University of Utah, took a look at the pea-size crustaceans called cyamids, or whale lice, that right whales carry by the thousands.

Seger, with an international team, sequenced the genes of each of the three species of cyamids that jump from whale to whale as the leviathans socialize. Reconstructing the whale-lice family tree, the researchers hoped, would shed light on the whales' social habits.

As it turns out, whales exchange lice so readily—and so thoroughly scramble the lice ancestry in each whale population—that lice genetics reveal nothing about how contemporary whales interact. But they do reveal when the whales stopped interacting, Seger realized. New lice species would have arisen precisely when the right-whale populations diverged. In mapping the lice family history, Seger and company had mapped the whales' ancestry too.

The crustaceans' ancestry suggests that one species of right whale began to split into three about 5 million years ago. First, the Isthmus of Panama rose and separated the Atlantic and Pacific groups. Warming equatorial currents later separated northern and southern groups. (Right whales dislike warm water.)

The research also proves North Atlantic right whales, which today number about 200, were once as robust as the southern whales, which number about 10,000 individuals. That's welcome news to conservation biologists making the case to protect them.

The whale's own genetics had already convinced most whale biologists that the three groups of whales should be considered separate species. "But the argument remained because the whales' genes are so uninformative," says Seger. "What we've done is frosted the cake. Our study settles the argument."