Western Butterfly Populations are Plummeting Thanks to Climate Change

Decades of observations show climate change is wiping out butterflies across the West. And in California, volunteers reported a “winter without monarchs.” 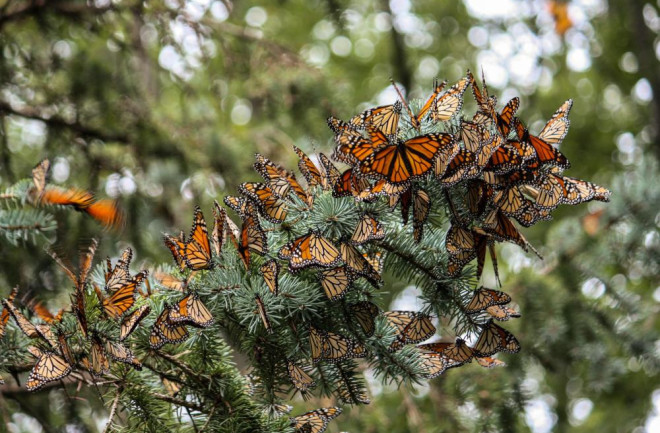 Monarch butterflies can travel thousands of miles on their annual migration across North America. (Credit: Jim in Monona, IA/Courtesy of Journey North)

In the past 40 years, butterfly populations have declined dramatically across the American West, both in cities and in the wilderness. Overall, butterflies are now declining at a rate of 1.6 percent each year. That’s what researchers using butterfly observations from citizen scientists and professional researchers found in a recent study. Their work, drawing from 72 locations across the western U.S. was published in the journal Science in March.

Meanwhile, other citizen science observations recently showed the western monarch butterfly population has fallen as much as 99 percent since the 1980s.

“The widespread butterfly declines highlight the importance of careful management of the lands that we do have control over, including our own backyards where we should use fewer pesticides and choose plants for landscapes that benefit local insects," lead study author Matt Forister, a biologist at the University of Nevada, Reno, said in a media release.

What’s driving the butterfly die-off? Researchers say the biggest impact seems to be from abnormally warm fall weather as a result of climate change. However, the study showed that fall temperatures seem to be most correlated with the die-offs they’re seeing.

For example, the researchers say that fall temperatures in Arizona have increased by about one-fifth of a degree Fahrenheit per decade since 1895. "Fall temperatures have warmed especially fast since the late 1980s and it's not clear why,” said Michael Crimmins, a professor at the University of Arizona.

This fall heat could be messing with butterfly migration and hibernation, the authors suggest. For example, the warmer fall temperatures could change the abundance of the food butterflies eat and the plants they live on. It also likely extends the time when butterflies’ predators are active.

As a result, some species have started moving north at a staggering pace.

This isn’t a problem relegated to just cities. The citizen-science-assisted research was unique in that it covered a wide swath of undeveloped land and wilderness, rather than simply measuring places where people live. Butterflies are still dying off even in the wild places of North America, the scientists found.

The researchers used butterfly sightings reported by North American Butterfly Association volunteers as well as the tens of thousands of users of iNaturalist, an app that lets citizen scientists report wildlife observations. Some of the data also came from volunteers with Adventure Scientists, a group that trains and equips outdoor athletes to collect wildlife sightings and other data in the backcountry. Researchers tied volunteers’ sightings in with a long-running dataset of observations collected by scientists in California, stretching from the Bay Area up to the Sierra Nevada Mountains.

“We cannot assume that insects are okay out there far from direct human influence," Forister said. "And that's because the influence of climate change is, of course, not geographically restricted."

Their findings aren’t uncommon. Around the world, researchers have been warning about an unfolding insect die-off that’s wiping out pollinators and which could reshape ecosystems. And conservationists have grown particularly worried about butterfly populations in recent years, especially the iconic monarch butterflies.

Monarch butterflies are exceptional creatures. They’re the only butterflies known to migrate two ways, north and south, like birds. The Xerces Society — a group that coordinates citizen scientists for a monarch butterfly count every fall — recently announced that they counted just under 2,000 western monarchs in 2020.

The past record-low winter monarch count was two years ago, when volunteers tallied 30,000 monarchs. For comparison, in 1977, the project counted some 45,000 monarchs at just one winter site, California’s Pacific Grove. But this winter most monarch sites were empty. Citizen scientists counted just a smattering of the iconic butterfly species. That staggering decline prompted some to dub this year “a winter without monarchs.”

Despite the plight of butterflies, there are ways volunteers can help.

Scientists can’t be everywhere, so they have to rely on volunteers to help learn how butterfly habitats and migrations might be shifting, as well as whether or not they’re able to find enough food and places to live.

There are a host of citizen science projects looking for volunteers to help researchers track butterfly migrations, as well as the ways climate change is altering seasons. One project, called the Western Monarch Mystery Challenge, asks citizen scientists to take pictures of monarchs and help researchers better understand where the butterflies spend the months of February, March and April.

No one can solve climate change on their own, but there are ways we can each make a difference from our own homes and backyards.

You can find more citizen science projects using the Project Finder at SciStarter.Org.