Were Humans and Neanderthals Swapping DNA Earlier Than We Thought? 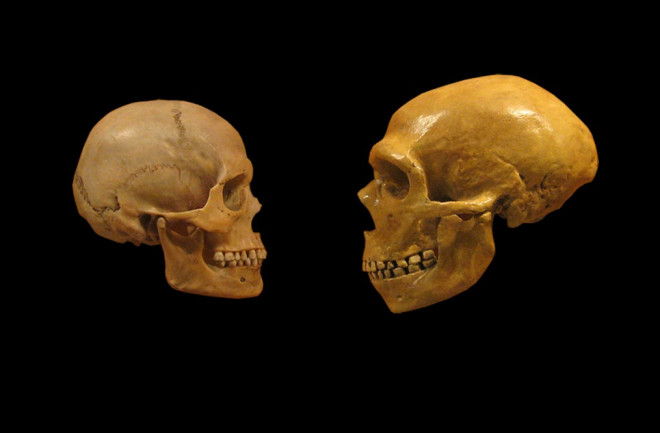 Comparison of Modern Human and Neanderthal skulls from the Cleveland Museum of Natural History. (Credit: Wikimedia) We’ve known for years that a lot of us are a little Neanderthal: among non-Africans, Neanderthal genes account for about 1-4 percent of our DNA, the result of interbreeding roughly 47,000-65,000 years ago as modern humans left Africa and moved into Neanderthal territory in Europe and Asia. But a genetic study of multiple individuals, published today in Nature, reveals that Neanderthals interbred with a much earlier wave of human migration, one that left Africa at least 100,000 years ago — about twice as early as we’d thought. Other teams had previously identified a handful of human-occupied sites outside Africa that are older than 65,000 years, such as the Skhul and Qafzeh caves in Israel, but today’s study is the first evidence that our species overlapped with Neanderthals so early. It’s also the first time scientists have identified gene flow from humans into the Neanderthal genome, rather than vice versa.

Insights From a Partial Toe

The team behind the Nature study analyzed the entire genome of an individual known as the Altai Neanderthal, a woman who lived in the Altai Mountains of Siberia roughly 50,000 years ago. Known from a single partial toe bone found in 2008, the Altai Neanderthal’s genome was fully sequenced in 2013 and has been used in a number of studies. The research published today was the first, however, to use multiple modeling methods to compare the genome with that of hundreds of modern humans as well as partial genomes of other archaic humans, including Neanderthals from Croatia and Spain. The team first used a method called G-PhoCS, short for Generalized Phylogenetic Coalescent Sampler, which analyzes very short segments across the entire genome to determine gene flow. To establish an accurate timeline, they focused on segments sometimes called “junk DNA,” which are known to accumulate mutations at a steady rate, unlike regulatory genes with mutation rates that can change in response to the environment. “We picked regions (to analyze) essentially free of the pressures of natural selection,” says co-lead author Adam Siepel, a quantitative biologist at New York’s Cold Spring Harbor Laboratory. “We’re using genetic drift as our clock.” The team next analyzed patterns of similarity. As Siepel explains, when the DNA contributed by each parent recombines into their offspring’s DNA, the genes tend to be passed down in blocks. Although the blocks are broken up over subsequent generations, their structure is still recognizable and can help researchers further refine how long ago that first offspring lived. “The support for block structure in the data is very strong,” notes Siepel.

The modeling results showed a clear indication that about 1 percent of the Altai Neanderthal’s genome was admixture from humans, with the team’s “genetic drift clock” placing the interbreeding event at more than 100,000 years ago. Although our understanding of our species’ relationship to Neanderthals continues to, ahem, evolve, researchers generally agree that Homo neanderthalensis and Homo sapiens split from our common ancestor at least 430,000 years ago, possibly as early as 765,000 years ago. Siepel admits that the team itself was initially suspicious about the results, and thought they might be the result of a flaw in the model or contamination with modern DNA. They tested the data using a number of different methods. “As time went on, we became more and more convinced nothing else could explain the results,” says Siepel. Ruling out contamination from modern humans, such as those who excavated the fossils, was fairly easy: The admixture — those pieces of human genetic code within the Neanderthal genome — differed significantly from any current human populations. It appeared to be from a group of anatomically modern humans that had long ago diverged from all other populations of our species. This fits with the notion of a much earlier wave of migration of humans out of Africa: if that first wave of explorers left the continent and headed to the Middle and Near East, they would be genetically distinct from both Africans and the descendants of subsequent migrations. Aware of the popularity of home DNA testing services that promise to unlock your ancestry with the mere swab of your cheek, Siepel stresses that the team’s research, while also technically “genetic analysis,” is on a whole other, more complex and more precise level. Their findings cannot be explained as a series of, say, coincidental mutations in the individuals studied. “Some studies are done with a few hundred genetic markers,” says Siepel. “This is a genome-wide analysis, and there’s no way that one, ten or a hundred chance mutations could change the findings.” He adds: “We would have to be wrong about an awful lot about how genomes evolve to get this wrong.”