Were Hominins In China 2.1 Million Years Ago? 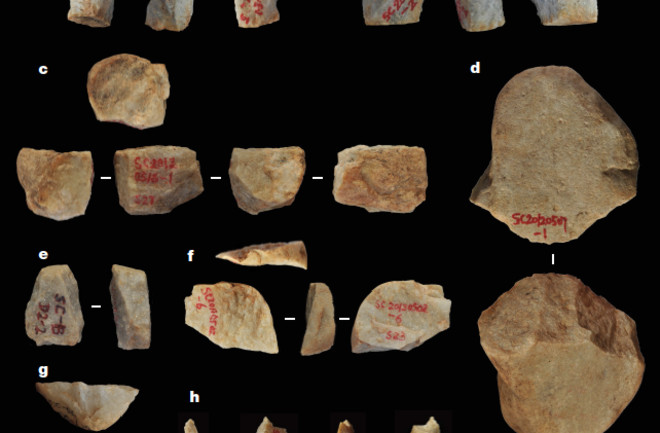 Researchers say scores of stone tools from Shangchen point to hominins in China more than 2 million years ago. Shown here: some of the oldest tools found. (Credit: Nature/Zhu et al 2018, doi:10.1038/s41586-018-0299-4) Nearly a hundred stone tools excavated from multiple layers at a site in China point to hominins — our ancestors and closest kin — being in East Asia about 2.1 million years ago. The find is the oldest evidence of hominins outside of Africa by more than 200,000 years and begs the question: what species made them? Hominins are those species in the greater primate family tree that are more closely related to us than to other apes. That includes members of our own genus, Homo: Neanderthals, Denisovans, Homo naledi and H. floresiensis, as well as more archaic species such as H. erectus and H. habilis. Earlier species, including Ardipithecus, Paranthropus and australopiths such as Australopithecus afarensis ("Lucy"'s tribe), are also hominins. In other words, it's a big bunch, and one conventionally thought to be rooted in Africa based on fossil evidence. In recent years, however, a number of finds on other continents, particularly Asia, have led a growing number of researchers to suggest that the long-standing "out of Africa" model may need some adjustment. Today's announcement of hominins in China 2.1 million years ago ups the ante on that debate: It pushes back the date for hominins outside Africa by hundreds of thousands of years. Georgia On My Mind Frequent Dead Things readers know that I'm a little obsessed with the hominin fossils from Dmanisi, a site in the Republic of Georgia. Remains of several individuals, including five skulls, have been found there and dated to about 1.8 million years old. Until the new finds in China, Dmanisi was the oldest hominin site outside Africa. And, to be fair, it is still the oldest hominin fossil site outside Africa. That's because what researchers found in Shangchen, China, are scores of stone tools and some partial animal remains, including those of deer and bovids, though the authors do not address whether the bones show evidence of processing by hominins. The tools do show patterns of manufacture consistent with hominins, but without the bones of their makers, we are left to wonder which species made them. The Shangchen finds are still highly significant, so let's take a closer look. Always good to start with a map, don't you think? Mapping It All Out The map below, part of a commentary published alongside today's study, is jam-packed with information that could do with a little clarification. Outside Africa, the red dots, marking hominin fossil sites, include early members of the genus Homo. Within Africa, those red dots mark fossil sites for either early Homo species or the even earlier australopiths. No australopith to date has been found outside of Africa.

Some of the oldest hominin fossil and artifact sites outside of Africa, as well as roughly contemporary sites in Africa for comparison. (Credit: Nature) It's worth noting, however, that stone tools have been around for more than 3 million years, longer than the genus Homo, and some recent research has suggested that australopiths may have been just as capable as early Homo species of making them — an important point, given that tool-making was once considered exclusive to our genus. Am I saying the hominins in China were australopiths? No. Without hominin fossils found with the tools, we simply don't know, and the current fossil record does not support australopiths leaving Africa. I'm merely pointing out that the more researchers uncover, the less the path of human evolution looks like a single, predictable line. Multiple Layers To The Story The tools and associated raw materials represent a hominin presence at Shangchen over hundreds of thousands of years. The oldest tools discovered so far are about 2.1 million years old, but the team excavated multiple layers at the site and found tools in a wide range of ages. To date the layers and the tools found in them, the researchers used paleomagnetic dating. Essentially, Earth's magnetic fields flip-flop over time, and as sedimentary deposits become rock, tiny amounts of magnetic minerals within them lock in the polarity present at the time. Thanks to copious amounts of data from securely dated sites all over the world, we've got a reference timescale that researchers can compare with the paleomagnetic signature of a layer to determine how old it is. Dating sedimentary layers at Shangchen gives researchers an accurate way to date the stone tools, but the layers revealed something additional. The site is located on China's Loess Plateau, and the layers alternate between soils that appear to have been deposited during warm, wet conditions and soils that give the plateau its name: loess, wind-blown particles of silt typically thought to indicate a cold, dry, harsh climate. While the stone tools in the study were sprinkled throughout 800,000 years of the layers, most of the artifacts were found in paleosol layers, suggesting a warmer, wetter climate. It could mean that the site was not continually occupied, and the hominins abandoned it during periods of colder temperatures and aridity, but more evidence needs to be gathered. Another bonus about finding the tools in sedimentary layers: The material stood out from the fine-grained paleosols, indicating the tools and the material used to make them was not local. The authors suggest that the rock may have come from the Qinling Mountains, a few miles to the south. The study did not indicate whether they have tested it using the relatively new method of elemental fingerprinting, which can reveal where source material for artifacts originated. Style Points A total of 108 flaked and unmodified tones were found at Shangchen, but the researchers focused on the 96 items found in the lower layers and covering the period from about 1.26 million to 2.12 million years ago: 82 flaked and 14 unmodified stones. The artifacts themselves are simple in style, including scrapers, points/borers and bifaces, or hand axes. Some of the flaked tools appear to have been resharpened after their initial manufacture. Two cobbles show damage through percussive strikes and were categorized as hammerstones. The artifacts from the oldest layer excavated included a scraper and a point, as well as cores from which tools were flaked. All of the artifacts were flaked from more than direction, a pattern typical of stone tool technology. Similar styles of stone tool-making have been found in Africa roughly contemporary with the Shangchen site. The Shangchen site is just a couple miles north of Gongwangling, where researchers unearthed a partial skull of H. erectus in the 1960s. Originally thought to be just over a million years old, more recent dating of the fossil has established it's 1.63 million years old, which puts it squarely in the same chronological neighborhood as the Shangchen artifacts. Several of the researchers involved in revising the Gongwangling fossil's age are also co-authors of today's paper, including lead author Zhaoyu Zhu. Based on the proximity of the Gongwangling find, as well as other fossils of similar age in both Eurasia and Africa, H. erectus seems the most likely hominin to have made the Shangchen tools. Until researchers find hominin fossils at Shangchen, however, we won't know for sure. All we can say for now is that the oldest of the tools, more than 200,000 years older than any finds at Dmanisi, suggest that at least one species of hominin left Africa well over 2 million years ago, a significant revision to the human evolution timeline. The study appears today in Nature.

Museum reconstructions of the partial crania and jaw found at Gongwangling, a site less than an hour's walk from where the Shangchen tools were found. Note that the signage includes the original estimated age of the fossils, which was revised to 1.63 million years old in 2015. (Credit: Wikimedia Commons)