Okay. So, the other day I asked an innocuous question about whether scientists get scientific tattoos. I also invited people to send in their own example. I didn't quite bank on this site becoming a clearinghouse for science tattoos. The traffic of readers coming in from reddit, etc., is startling enough. But the stream of tattoo pictures coming into my inbox is causing me to freak out, ever so slightly. Seriously, think about this: people with Ph.D.'s, who study esoteric aspects of physics and insect neurology are baring flesh, snapping pictures, and sending them to me, a stranger. Just consider today's addition. It comes from Jay Phelan, a biologist at UCLA, and author of Mean Genes. Phelan writes:

...I think you're right that you've just hit the tip of the iceberg. I thought I'd add mine to your collection. I got it around 1990 when I was in graduate school. As I got deeper into the study of evolution, genetics, and human behavior, I realized that there was a tension between what my genes "wanted" me to do and what I wanted to do--from the fattiness of the foods I ate, to the selfishness/selflessness I showed to others, to issues with managing my money, my risk-taking, and my relationships, and more. It dawned on me that I was fighting a never-ending battle. Anyway, I tried to come up with a design that captured that tension and, once I did, decided to get it tattooed on my back. About ten years later, I co-wrote a book called "Mean Genes: From Sex to Money to Food: Taming Our Primal Instincts" (with Terry Burnham) and our publisher ended up including my DNA monster as part of the cover. (Unfortunately, it doesn't show up too well in this image; I'm on the road and don't have access to a better image of it.) Take care, Jay Phelan

So, without further ado, I give you the DNA monster...(which I've inserted, along with all the other tattoos I've received, into the original post 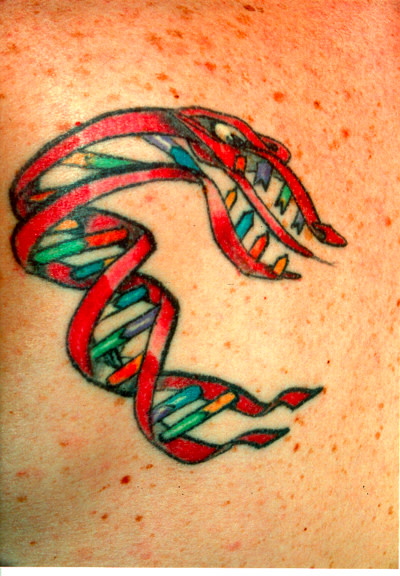 The SciencesAfter You Die, Your Body Could Be Turned Into a Diamond
Recommendations From Our Store