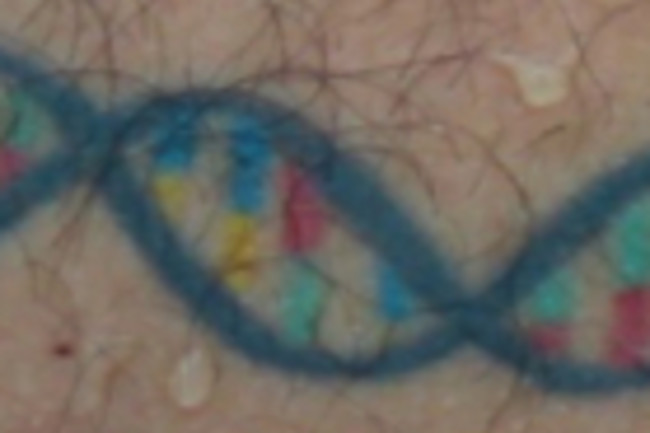 The other day I was pondering how scientists tattoo themselves with their science. I was at a pool party where a friend, Bob Datta, had jumped into the water with his kids. Datta is a post-doc at Columbia, where he studies genes in Drosophila flies. I noticed that Bob had a tattoo of DNA on his shoulder. At first I thought it was a generic snippet of the molecule, but then Bob told me that it actually represents, in the genetic code, his wife's initials: EEE. Geek love in its noblest form. [For the gorey specifics, see Bob's comment below.] Bob's tatoo reminded me that I have seen other scientists festooned with their science. There was the mycologist whose arms were covered with a black mesh, which he explained to me was subterranean network of threads produced by the death cap mushroom. And then there was the developmental biologist whose arm is swathed in the image of the fish he studies. (He declined my request for a photo of the tattoo until he gets tenure.) So I'm wondering now--have I bumped into the tip of a vast hidden iceberg, or do I just happen to know the few scientists with tattoos of their science? If anyone wants to send me a jpg, I'll post it. If you're worried about tenure, just let me know how the tattoo represents the object of your study. The more personal the link, the better (i.e., not a generic tattoo of pi). Below the fold: the iceberg unveiled! Update, 9/2/07: The response to my question has been so rabid that I've moved all the pictures to a Flickr set. Feel free to send me yours--either post in the comment thread, or email it to blog at carlzimmer dot com. Update, 2/18/08: The tattoos are moving to a new home: Carl Zimmer's Science Tattoo Emporium. The request for your science tattoo still stands.