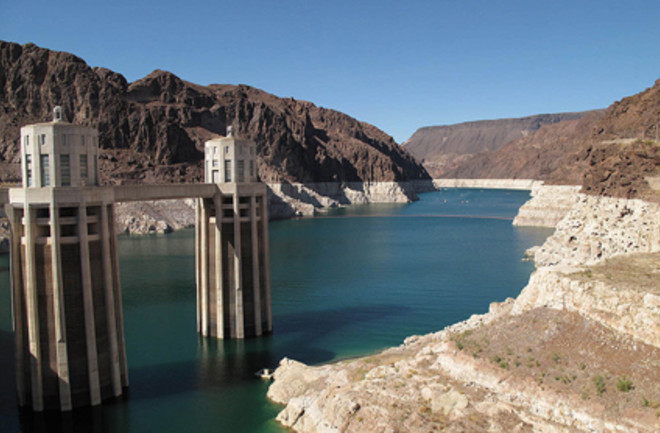 Worrying about water (and fighting over it, and creatively diverting it) is a way of life in the arid American West. However, according to reports out this week, the ever-precarious water level is nearing a breaking point where the states of the West might have to put emergency plans into place. Lake Mead, the giant reservoir formed by the Hoover Dam near Las Vegas Nevada, is fast approaching its all-time low level of 1,083 feet set more than half a century ago. Should the level dip below 1,075, things will get serious.

That will set in motion a temporary distribution plan approved in 2007 by the seven states with claims to the river and by the federal Bureau of Reclamation, and water deliveries to Arizona and Nevada would be reduced. This could mean more dry lawns, shorter showers and fallow fields in those states, although conservation efforts might help them adjust to the cutbacks. California, which has first call on the Colorado River flows in the lower basin, would not be affected. [The New York Times]

The fact that the reservoir still contains more than 1,000 feet of water might make the situation sound less dire, but remember that Lake Mead and Hoover Dam provide the Southwest with not just water, but also power. At a water level below 1,050 feet, Hoover's electricity-producing turbines may not work. According to the Times

, there is a plan B. Up the Colorado River in Utah, Lake Powell

's water level is growing, and water managers could choose to send more downstream to replenish Mead and stave off water restrictions—at least for now.

Thirty miles from the Hoover Dam, the city of Las Vegas is preparing for a shortage. “I know it’s a very real possibility. I know the Southwest will face it at some point, it’s just a question of when,” says Pat Mulroy, Southern Nevada Water Authority general manager. [CNBC]

While the American West juggles its water to avoid disaster, the Los Angeles Times reports

from the $60 billion South-North Water Diversion, a monumental water-moving project under way China to rejigger the entire country's water supply and reroute more of it to populated areas like Beijing.

China is plagued by extreme weather. Vast river deltas in the south are inundated each year by deadly flooding, while the steppes of the north are swept by sandstorms. To remedy this, the engineers are creating a vast, hydra-like network of canals, tunnels and aqueducts that will extend thousands of miles across the country. [Los Angeles Times]

It would take China decades to complete the country-spanning project, a sort of Great Wall of water that bears an estimated cost twice that of the Three Gorges Dam

. The design relies on gravity to do the lion's share of the work, moving water from high elevation to low. But the system might require lots of dampers

to keep the flow of water at a safe speed, and the water itself could be too polluted for agricultural use by the time it completes its journey. Re-engineering a country also means moving people out of the way. Last month the Chinese government relocated the first

of what will eventually be one-third of a million people forced to move to make way. Related Content: DISCOVER: How Big Is Your Water Footprint?

DISCOVER: Dams, From Hoover to Three Gorges to the Crumbling Ones

80beats: Dams May Degrade One of China's Remaining Healthy Rivers

Image: Wikimedia Commons (Lake Mead, showing where the water line used to be.)