The fastest way to make a new island is volcanism. The island of Nishino-shima in Japan has doubled in a little over 7 years, all thanks to lava flows. 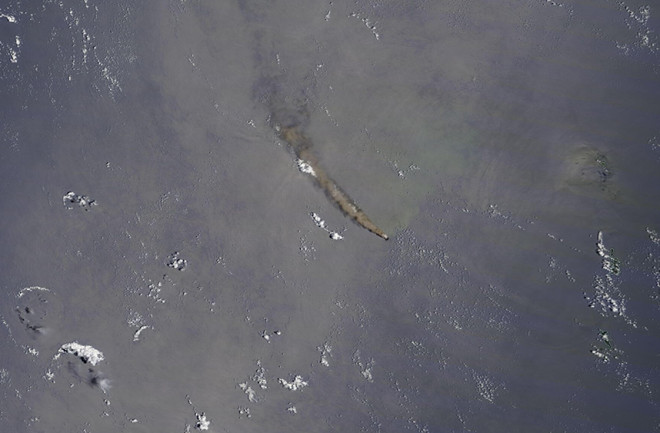 In November 2013, a volcano started erupting just off the coast of Nishino-shima, a tiny island south of Japan. Over the course of the next nearly seven years, these eruptions poured lava out, first forming a new island (Niijima) and then linking the two islands together into a new, larger Nishino-shima. Even today, the eruption continues, producing long ash plumes that stretch across the blue waters of the Pacific.

Nishino-shima Island itself is just another part of the bigger volcano that rises from the seafloor. Eruptions in 1973-'74 took a few smaller islands and merged them into the pre-2013 Nishino-shima. Islands like these form commonly at oceanic volcanoes. Sometimes they persist like the small islands at Nishino-shima. Many times, they are obliterated by the relentless waves, only to rise again during the next eruption.

Two images of Nishino-shima in Japan, one from 2013 and one from 2020. The island has almost doubled in size over those 7 years. (Credit: Google Earth)

This eruption at Nishino-shima started just off the island. In only a few months, the new island had attached itself to the original and lava flows covered both pieces of land. The before-and-after images from Google Earth (above) show how much the island has changed. These two images are at the same scale, so the small island that existed in 2013 (with the new island, Niijima in the lower right) is dwarfed by the coalesced island in 2020.

The island of Nishino-shima in June 2020. The over 200-meter-tall cone towers over the island with a dark grey plume of ash. The white plume behind it is created by lava reaching the ocean. Taken June 19, 2020. (Credit: Japan Coast Guard)

The eruption on Nishino-shima is mostly basaltic lava flows (like those in Hawai'i), but a cinder cone has also grown on the island (above and below). What was once an almost flat piece of land as an edifice that reaches a few 600 feet (~200 meters) over the waves. This is pretty typical for oceanic volcanoes like this, where once an island is established, lava flow from cinder cones help build the island outward into the sea.

Powerful blasts of lava from Nishino-shima. The ash and volcanic bombs produced from these explosions at the cinder cone are clearly visible. Some blocks might be close to a meter across. Taken June 29, 2020. (Credit: Japan Coast Guard)

The tendrils of lava flows are clear to see in the 2020 image of the island. Each lava flow would add a delta into the ocean, maybe triggering explosions as the 1,200-degree Celsius lava hits the, to the lava, frigid waters (see above). At the same time, the gas-charged lava might be producing an ash plume from the cinder cone. The ash plume image (top) taken on July 26, 2020, drifted for hundreds of miles over the Pacific Ocean, sending ash up to 20,000 feet (~6.4 kilometers) into the skies.

It is not hard to imagine islands like these rising from Earth's primordial seas. For billions of years of Earth's history, these promontories were barren rocks in a sea that was teeming with life. Today, life finds these islands quickly.