Eruption at Nishino-shima in the Pacific Produces a New Island 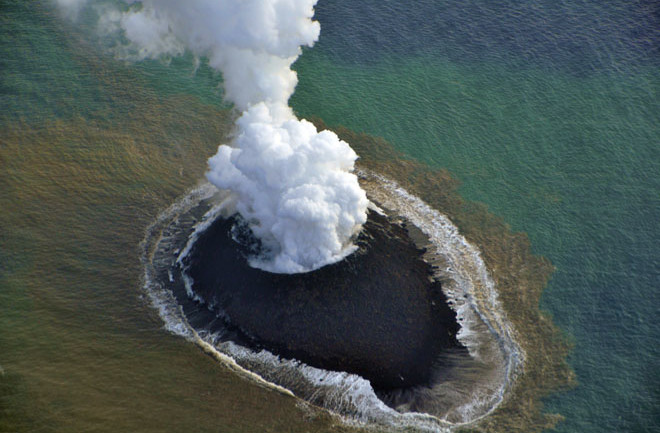 The new island of Niijima at Nishino-shima, south of Japan, seen on November 21, 2013. Image: Japan Coast Guard Somehow as November slipped by, I missed marking the 50th anniversary of the eruption at Surtsey off the coast of Iceland. This eruption started as a submarine one that was large and sustained enough to produce a new island in the North Atlantic. These sorts of events are fairly rare. Most of the time a new volcanic island emerges, it is quickly eroded by wave action. This is due to the nature of the material that constructs those early volcanic island, that being volcanic tephra. The island is more-or-less a pile of loose debris piling up until it reaches the surface. In order for the island to have much lasting power, it needs to emerge from the sea and erupt for long enough to start producing more resistant lava flows that will keep the waves from washing away the island. Why do I bring this up now? Well, it seems we have an eruption like Surtsey occurring in the middle of the Pacific Ocean south of Japan. A new eruption at Nishino-shima has breached the surface and started to produce a small island (see above) of black volcanic tephra. The new island (being called Niijima) still looks small, with some reports putting the island at a cozy 200 meters (650 feet) across and 20 meters (65 feet) high -- likely not something that would survive for long in the rough Pacific if it only grows to this size. The plume hasn't been noticeable (at least to me) in any satellite imagery, but that could change some now that the island is above sea level. So far, there isn't really any hazard for people who live near the remote island, but the Japanese Meteorological Agency has warned ships not to approach the crater. You can see the action in this Japanese Coast Guard video of the eruption, along with some great images of the eruption here. The new vent is just off the shores of another small island and some of the stills included in the news report show those classic "rooster tail" eruptions (see below) that go with these Surtseyan eruptions (named after the aforementioned Iceland event).

"Rooster tails" during the eruption of Niijima at Nishino-shima in Japan, seen on November 20, 2013. Image: Japan Coast Guard. Nishino-shima is part of a caldera within the aptly-named Volcano Island arc (part of the Izu-Bonin-Mariana volcanic arc). There are a number of caldera along the act including Nishino-shima and the more famous Ioto (Iwo-Jima). The last major eruption from Nishino-shima was exactly 40 years ago, when another small island was produced by the volcano -- potentially its only eruption in the last 10,000 years. Since then, discolored water has been spotted in the vicinity, suggesting submarine eruptions or active submarine fumaroles have been going since that 1974 eruption. However, this new activity is apparently the first to break the sea's surface since those events 40 years ago. If you need something to read, there is a fascinating article at how quickly the new island at Nishino-shima was colonized by plants and arthropods after it formed in 1974 -- just shows how quickly life will colonize new land. I did enjoy finding a news report about how Japan is eager for this island to become a permanent feature as it could expand their territorial waters in the Pacific Ocean. It might take awhile before the volcanic island can be truly declared permanent (and I'm not even sure who does that ... the United Nations?) The region has been a site of some dispute with China over territorial island, so Japan has a strong interest in expanding their presence in the region. There isn't much in the way of people in the Ogasawara Islands (Bonin Islands), but the whole region is a UNESCO natural world heritage site, so tourism is important.