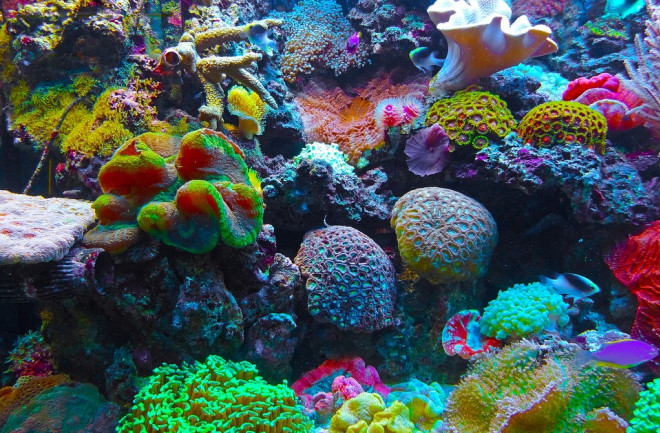 (Credit: Jan Mallander/Pixabay) A first-of-its-kind underwater microscopic imaging system is giving scientists an up-close perspective on the frenzied daily lives of corals. Corals appear fairly sedate when viewed from on high, but they're abuzz with activity that occurs on scales too small for us to see with the naked eye. Fully zoomed in, scientists observed coral polyps engaging in the "three Fs" of existence: fighting, feasting and...making love within their vast colonies. Spying on the way coral engage in these essential behaviors will give researchers new insights into how the coral communities live and how they die — important work during a period of unprecedented bleaching events.

Going to Where the Action Is

Scientists have imaged corals up close in the lab, but artificial environments can only take research so far. So scientists from the Scripps Institution of Oceanography at the University of San Diego designed the Benthic Underwater Microscope (BUM), which allows them to observe coral polyps at resolutions of up to 2 micrometers while remaining a safe distance away. They describe their camera in a paper published Tuesday in  Nature Communications.

The BUM is in position and ready to capture all the action. (Credit: Jaffe Laboratory for Underwater Imaging/Scripps Institution of Oceanography, UC San Diego)

They tested their camera in Hawaii and the Red Sea, as well as in the lab, and returned with images documenting some new and unexplained behavior. They were able to watch in real time as two species of coral fought for territory, emitting mesenterial filaments in an attempt to digest unwanted neighbors. Interestingly, when two coral of the same species were placed next to each other, nothing happened, revealing that the corals have some way of telling friend from foe. They also saw the corals entwine their gastrovascular openings in an underwater embrace, a behavior they termed "polyp kissing." Researchers don't know exactly why the polyps hug it out, but they think the behavior enables the exchange of food and other materials. [embed]https://www.youtube.com/watch?v=kXgEKLC63mw[/embed]

The team also used the camera to document coral bleaching in unprecedented detail — the darker side of life in a coral community. Bleaching events occur when corals eject their symbiotic zooxanthellae, friendly algae that help them to synthesize sunlight into usable energy, and which are also responsible for the explosion of color that characterizes coral reefs. When the water gets too hot, however, the algae get kicked out, leaving the corals bone white and substantially weakened.

An image of a coral polyp acquired using BUM's 3x objective lens. (Credit: Andrew Mullen) Harmful algae soon move in and smother the coral polyps, eventually killing them. The researchers watched this process unfold in real time at the microscopic level. They noticed a pattern to the algae assault: It forms on the ridges between polyps, leaving the essential structures themselves alone. In time, they overwhelm corals entirely, leading to death. The researchers hope documenting coral death in such detail will reveal new ways to combat harmful algae growth.