Was The Thylacine Doomed Even Before Humans Arrived in Australia? 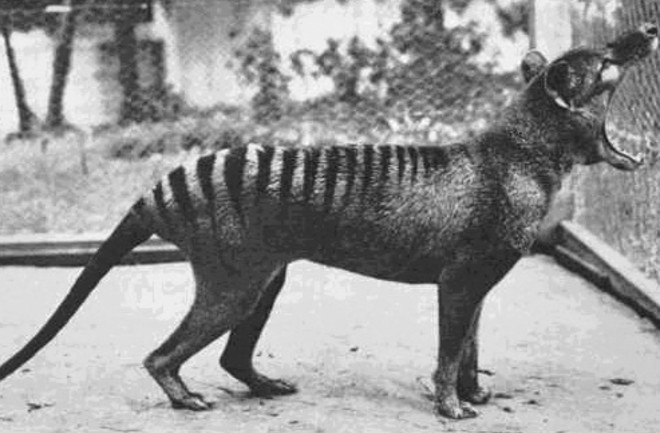 Benjamin, the last living thylacine (as far as we know), photographed in 1933, three years before his death. (Credit: Photographer unknown, Wikimedia Commons) The Tasmanian tiger, or thylacine, went extinct in the 1930s after a concerted eradication campaign by humans. But a new study suggests that the marvelous marsupial native to Australia may have been in trouble long before then. Among recently extinct animals, few capture the imagination quite like the thylacine. The Tasmanian tiger appeared almost dog-like (it's also called the Tasmanian wolf) and yet was loaded with bonus features such as a back-facing pouch and a jaw able to open remarkably wide (though not quite as dramatically as some sources claim). The large marsupial apex predator once roamed throughout Australia and New Guinea, but went extinct by about 3,000 years ago everywhere except the island of Tasmania, off Australia's southeast corner. A population had been isolated there, cut off from the mainland population, about 14,000 years ago. The reasons for the animal's extinction from everywhere but Tasmania have not been fully explained, though the arrival of the dingo likely played a huge role. After being deemed a threat to livestock in its last remaining habitat, the Tasmanian Tiger was wiped from the world, hunted to extinction. (Rumors persist of single animals or isolated populations popping up now and then, but that looks about as likely as the yeti actually being a man-beast hybrid.) Because of its recent shove off the mortal coil due to human activity, the thylacine is something of a poster child for de-extinction, with many calls to bring the animal back from The Great Beyond. The thinking goes that samples of relatively recently dead individuals might yield high-quality DNA and besides, its extinction was blood on our collective hands as a species, should we not give it a second chance? Regular readers of Dead Things know I am not on the de-extinction pep squad for a number of reasons, but a new study out today raises some interesting questions about what was going on with the thylacine lineage before the first humans arrived in Australia, now known to be up to 65,000 years ago. Diversity Is Important Researchers sequenced the thylacine genome obtained from a preserved youngster pickled in alcohol for the last 108 years. They analyzed it using a method that essentially allows them to peer backwards in time and glimpse the backstory of a lineage. As study co-author Andrew Pask of the University of Melbourne explains via email: "The method is called pairwise sequentially Markovian coalescent (PSMC) analyses, which uses a pair of chromosomes (or one diploid individual) to estimate past population sizes."He says: "Basically it looks at stretches of DNA where the chromosomes are the same (homozygosity) and stretches where the chromosomes are different (heterozygosity) and then uses some complex maths to assess what the population structure would have looked like over time.""It does this by looking at the amount of homozygosity and heterozygosity and the size and number of those regions spread across a genome. It's been used on modern populations and been shown to be very accurate!" Pask adds.

The thylacine (a) was similar in general appearance to the dingo (b) (which likely played a significant role in the former's demise from the Australian mainland 3,000 years ago). Today's study sampled DNA from a "pouch young" thylacine that was preserved in alcohol for more than a century (c). (Credit: Feigin et al, 2017, doi: 10.1038/s41559-017-0417-y) What the team found was that the species apparently experienced a sharp tumble in genetic diversity during a period 70,000-120,000 years ago. The timing coincides with a general climatic big chill. The finding hints that the thylacine underwent some kind of significant reduction in numbers that caused genetic diversity to drop. It appears that the thylacines never quite recovered genetically. Low genetic diversity isn't always a crisis, but it's never good news for a species. The lower the diversity, the less chance a species can adapt to changes in its environment, from novel pathogens to climate shifts. Right now, for example, the thylacine's nearest living relative, the Tasmanian Devil, is experiencing a precipitous decline due to individuals' susceptibility to a facial tumor disease — a susceptibility directly linked to the species' low genetic diversity. It's possible that the low genetic diversity discovered in today's study made it tougher for the thylacine as a species to survive in the face of new threats such as humans, dingos and new diseases entering its environment. The animal appears to have been already imperiled, genetically speaking, before those foreign threats arrived. At the same time, however, it's important to understand that low genetic diversity doesn't mean the population numbers never rebounded. Generally speaking, once a species undergoes a genetic bottleneck like today's study found with the thylacine, the size of the population recovers much faster than its genetic diversity. The new finding is a clue rather than a smoking gun to what may have kicked off the species' doom. Wolf v. Tiger Today's study also investigated the genetic backstory of the thylacine's extremely canid-like appearance. It's long been considered a case of convergent evolution — when two unrelated species develop similar traits independently, usually as a result of exploiting the same ecological niche. But researchers wanted to go more than skin-deep, so to speak, and figure out if the similar traits arose from the same genetic activity. The researchers compared the thylacine genome with an ancient canid genome they reconstructed from five living canid genomes, including that of a wolf, jackal, coyote, red fox and arctic fox. And surprise: It turns out that natural selection operated on different genes and genetic pathways in the canids than in the thylacines. It's a stunning illustration of how organisms can take different routes to arrive at the same destination, at least in terms of physical appearance. Today's research was published as open-access in Nature Ecology & Evolution.