Was King Arthur a Real Person?

Did King Arthur actually exist? Scholars have debated this question ever since the legend was born in the 9th century. 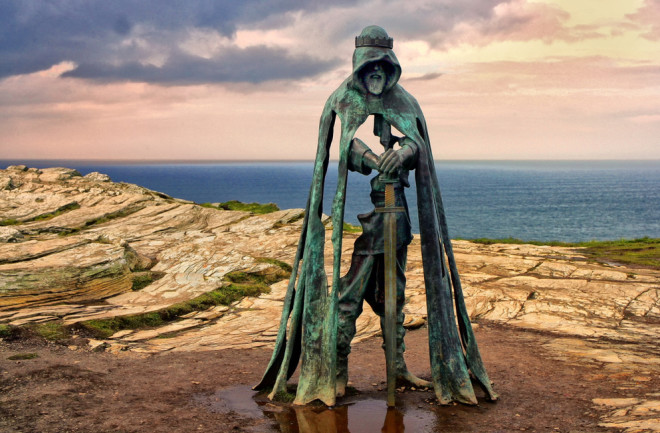 Strange women lying in ponds distributing swords may be no basis for a system of government, but the legends surrounding Arthur, king of the Britons, are the foundation for a grand artistic tradition. For a millennium, tales of Arthur and his knights have inspired remarkable works of literature, visual art, opera, film, and comics — and not just in the English-speaking world, but everywhere.

Even the wildest legend may be rooted in historical fact. And despite their fantastical elements, Arthurian legends position him in a real historical and political milieu: southern Britain, around Wales and Cornwall, in the 5th century A.D., within a generation or two of the Roman withdrawal in A.D. 410. Roman occupation had brought peace and prosperity to Britannia; their departure created a power vacuum that homegrown warlords scrambled to fill, while leaving the island newly vulnerable to conquest by the seafaring Saxons.

Although the details vary across accounts, Arthur is always portrayed as a fierce combatant who rose to power while fighting off invaders, as in the Battle of Badon in the year 500, where he is credited with personally slaying as many as 960 Saxons. These deeds are attested in a number of ancient manuscripts. But sorting out fact from fiction is tricky, because of both the manner in which these texts were preserved and the medieval frame of mind in which they were composed.

Tales and poems about Arthur date back as far as the 9th century A.D. — and perhaps even earlier. Precise dating is impossible. Medieval manuscripts were periodically recopied by hand, and it was not uncommon for later scribes to revise and update the material, making no distinction between the original content and later additions. For instance, the Welsh poem Y Gododdin, which contains a passing allusion to King Arthur — possibly the earliest such written reference — was probably composed around the year 638, scarcely a hundred years after Arthur’s putative death. The only surviving copy, though, is a transcription made six centuries later. We cannot know whether the relevant stanza is part of the original poem or a later insertion.

This issue recurs with all ostensible primary sources. The History of the Britons, attributed to the Welsh monk Nennius, details Arthur’s many battles against the Saxons; but it was not composed until around 828, and the oldest surviving copies date from 300 years after that. The Annals of Wales, compiled by the scholarly community of St. David’s, provides additional tantalizing references to the Battle of Badon, as well as to Arthur’s death in battle at Camlann in 537. But the Annals are long removed from the events they describe. Completed around 977, they too likely underwent many revisions in the centuries separating the original composition from the earliest known copy.

The Arthur of these early accounts lacks the tragic nobility of modern interpretations. He’s a rather generic warrior, dux bellorum (war chief) rather than a king — a sort of Celtic Hercules. Not until Geoffrey of Monmouth’s History of the Kings of Britain from the year 1138 does Arthur assume his stature as a royal ideal. Geoffrey’s account provides the first mentions of Guinevere, Merlin, Excalibur, and other familiar names.

The dubious nature of Geoffrey’s History, particularly its supernatural aspects, did not go unchallenged. His near-contemporary, the scholar-monk William of Newburgh (1136–1198), opined that Geoffrey had likely invented much of his narrative out of “an inordinate love of lying.” But Geoffrey didn’t necessarily think of himself as writing fiction, per se. Our modern idea of history as an empirical analysis of contemporary sources in their cultural context is a relatively recent innovation. In part, that’s because the written record, prior to the advent of printing, was sparse and unreliable. For medieval scholars like Geoffrey (to say nothing of ancients like Herodotus), the distinction between fact and legend was murky — and “accuracy” was secondary to narrative unity.

However speculative, Geoffrey’s History proved hugely popular. French and English writers were soon churning out Arthurian romances, introducing now-familiar characters and concepts: Sir Lancelot’s forbidden love for Guinevere, the quest for the Holy Grail, the enigmatic Green Knight. Previously freestanding tales, such as that of Tristan and Iseult, were reframed as episodes in the larger saga. The Arthurian legendarium became a comic book-style shared universe, a container for folktales from across Europe.

In these later romances, Arthur fully becomes a literary, as opposed to pseudohistorical, figure — a symbol of chivalric virtue, and of the inevitable (but still heartbreaking) failure of utopian dreams.

Contenders for the Crown

Current academic consensus considers the evidence for a historical Arthur unconvincing. British archaeologist Nowell Myres (1902–1989), who devoted 50 years to the search, wrote near the end of his life that “no figure on the borderline of history and mythology has wasted more of the historian’s time.” The absence of evidence, however, does not always constitute evidence of absence. Some scholars propose that although Arthur himself was not a historical person, his legend may have been inspired by one.

Some of these proposed pseudo-Arthurs are frankly implausible. The claims for Artúr mac Áedán, a prince of a 5th-century Gaelic kingdom in the west of Scotland, and Lucius Artorius Castus, an Etruscan-born Roman cavalryman who occupied Britannia in the 2nd century, hinge mostly on their names; they are 400 miles too far north and 300 years too early, respectively, to be truly credible.

More promisingly, cultural historian Geoffrey Ashe (born 1923) identified the 5th-century Romano-British military commander Riothamus as a possible pseudo-Arthur. Of obscure background, Riothamus (or Riotimus) is mentioned in Roman histories as leading a war party in Brittany, the Celtic province in the north of France, supporting Roman troops in a campaign against the Goths around the year 470. His historicity is further established by a surviving letter written to him by the bishop of Clermont. The Gothic historian Jordanes even called Riothamus “King of the Britons,” in 551 — although the size and location of his kingdom is unknown. He may even have been a native of Brittany, making him, in fact, king of the Bretons.