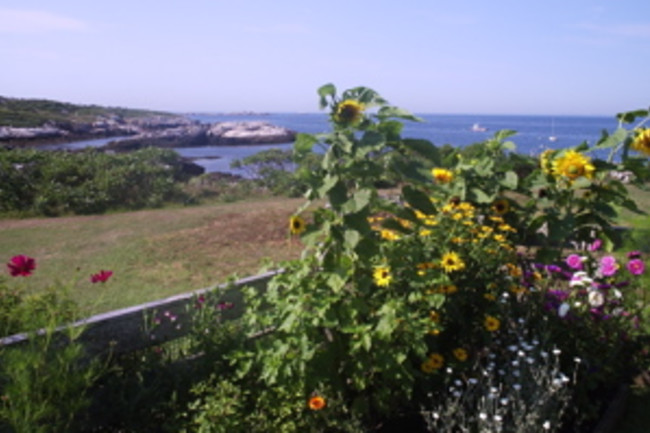 My wife and I were following our children across Appledore Island, reaching a crest where we could see the mainland coast--Massachusetts, New Hampshire, and Maine all stretched out in a single sweep--when a woman in bloody surgical gear stepped out into our path. She warned us that behind the old radar tower next to us some pathologists were cutting open a seal. It would be a good idea if we steered the children away.

Naturally, I let my wife head on with the kids and snuck around the tower to check out the necropsy for myself...

There, on an open porch, a dozen people huddled around a table, gazing at a pair of harbor seals. The animals had washed ashore along the Connecticut coast, and pathologists had driven their frozen cadavers up to Portsmouth and then loaded them on a ferry for Appledore. Here they were now demonstrating to their students how to take apart a seal and figure out the way in which it died. One seal was still intact, the other slit open. The EPA expert asked for some pruning shears to crack open its basket of ribs. Another scientist inspected its teeth and drew out a few nematode worms from its throat to drop into formaldehyde. The worms did not signify that the seal had died of some sickness, he explained; the parasites kept their final hosts perfectly healthy, since they were the place where the parasites lived as adults and produced their eggs.

I came to Appledore Island last week at the invitation of Willy Bemis, the director of the Shoals Marine Laboratory, a cluster of buildings at the center of the island. I hadn't heard about the lab before he made contact, but I certainly knew about Bemis. For years he has been investigating the anatomy and development of fish. Fish are not just interesting for themselves, but also for the clues they provide to our own evolution. (Bemis was the subject of a lovely article by the great John McPhee a few years ago in the New Yorker, and figures in McPhee's book, The Founding Fish.) So when Bemis asked me to come give a talk, I pretty much took it as a command.

From Portsmouth it takes a boat under an hour to reach Appledore. The island is part of a rocky archipelago known as the Isles of Shoals. They were discovered by John Smith in 1614, and when I informed my daughter Charlotte of this fact as we climbed up from the dock, she made plans to locate Pocohantas during our stay. In the nineteenth century, the island became a famous resort with a grand hotel that attracted painters and writers. The garden in this picture was originally planted by Celia Thaxter, herself a successful writer (and author of the book An Island Garden). The garden originally sat in front of Thaxter's house, but today all that's left of the house is a few foundation stones. A fire swept across the island in the early 1900s, destroying not only Thaxton's house but Appledore's hotel. The island remained abandoned until the 1970s, when Cornell University and the University of New Hampshire set up the laboratory, a place where biologists could research the remarkable animals of the island and the surrounding sea, and where students could come to learn about marine biology (including how to dismantle a seal).

The first thing you notice on the island is the screaming. The island is a nesting site for gulls, who set up house everywhere--on the rocks, on the houses, under the bushes. I haven't thought much of gulls in the past; in my experience, they're just big birds searching for trash. But on Appledore Island you get a feeling for them as full-blown wild animals. The gull chicks huddle together, their grey down fluttering. The juveniles get to be as big as full-grown adults, but they cling to childhood--they still have the grey color they were born with, the black beaks, and the high whine. They following after their parents, begging ludicrously for food. The parents sometimes vomit up a meal, but more often try to ignore their oversized kids.

We had to wait until sundown before I could give my talk, so that the commons was dark enough for my slides. I spoke about the gulf between biologists who study molecules and those who study organisms. It seems to me that this gulf opened up at least fifty years ago, back when James Watson and E. O. Wilson battled over the mission of Harvard's biology department. I offered some examples of the troubles this divide causes today, drawing on an essay I wrote for the journal PLOS Computational Biology. As an example of a solution, I described how scientists are learning about how we evolved hands and feet by combining information from ancient fossils with studies of the genes that build fins and limbs (which I blogged about here).

Among the people who raised their hands after my talk was done was Bemis. Bemis talked about how he had personally witnessed this conflict over the course of his career. And he felt Watson's side--the biologists who focus their attention on genes and proteins, who give little thought to the diversity of living, breathing things--have pushed aside biologists like himself, at least when it comes to deciding how to hand out funding and positions in biology departments.

I turned over Bemis's comment the next day, which my family and I spent prowling the island. I started thinking of it not as Appledore Island, but Organism Island, a place where biology is on display in all its embodied beauty. A scientist who sequenced the genome of the harbor seal would know only a little about the animal that lay cut open on the table, how it lived or how it died, how to read its signs to know its history. I took my girls to see scientists banding migratory birds that stop over at Appledore. One scientist gently gripped a warbler and measured its wings. To see how much fat it had stored for its journey, she blew the feathers on its breast, to look for the yellow blobs nestled below its translucent skin. And while I spared the girls the gore of a seal necropsy, they made a bee line for the shark biology class, which was held on another porch. Dominique Dagit of Millersville University in Pennsylania ran the class, showing off fish she had caught that morning, as well as others she had fished in Virginia waters a few days earlier and brought here in a cooler. 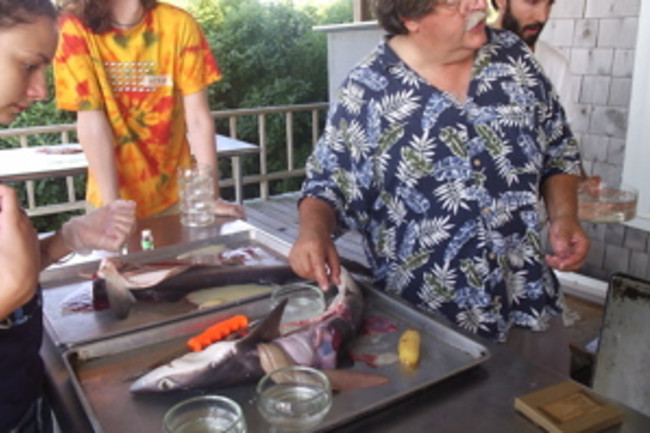 Bemis joined Dagit (his former student) in dismantling the skates and the dogfish and the Atlantic sharpnose sharks. From the sharpnose’s belly of a spiny dogfish slipped a beautiful golden banana, known to anatomists as the candle. It is actually a pair of yolks joined in a single sack. With surgical grace, Bemis gently released each one into a separate dish. Dagit dipped a pair of tweezers, and after a few seconds of close scrutiny, she pulled up a shark embryo from each, both smaller than a guppy. It had taken these embryos nine months to get that big; they would have stayed inside their mother for over another year before they would have swum out of her body. Dagit dropped each embryo gently into a vial of formaldehyde, so that she could inspect their developing bodies under a microscope.

There is certainly a place in the world for the armies of robot DNA sequencers, for the crowds of scientists who all study fruit flies or lab mice. But I hope that there will still be places for the likes of Bemis and Dagit, that they don't become an endangered species trapped on Organism Island.