The Oregon Cascades are filled with volcanoes. One of those volcanoes dammed the McKenzie River over 2,000 years ago and drowned a pine forest that can still be seen today. 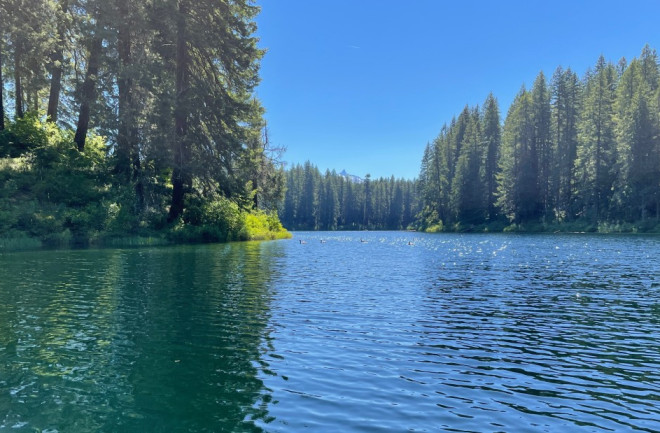 A view of Clear Lake in Oregon with Mount Washington in the background. Credit: Erik Klemetti

Just off the McKenzie Highway in central Oregon lies Clear Lake. This small lake, fed by snowmelt from Mount Washington and nearby springs isn’t an old lake. In fact, ~2,000 years ago the lake didn’t even exist. Instead, the McKenzie River flowed past the spot on its way to join the Willamette River. However, a volcano formed near the McKenzie that threw that path out the window.

The Central Oregon Cascade vistas might be dominated by the big volcanoes like Mount Jefferson and the Three Sisters, but the smaller lava fields like Sand Mountain and Belknap Crater might be as important. These areas of cinder cones and lava flows covered the landscape over the past few thousand years. Most are unlikely to erupt again, but a new volcanic field is more than likely to form in this area in the future.

How Sand Mountain Made a Lake

One of the most recent is the Sand Mountain Volcanic Field. There are 23 cinder cones and many more lava flows that can from this line of volcanic vents. Most of these formed in eruptions that occurred only ~2,950 years ago, although the volcanic field was likely active from 4,000 to 2,000 years ago.

Eruptions like the Sand Mountain Volcanic Field start off as fissures (cracks) that form, followed by lava flows that pour out of these cracks. Eventually, the lava centralized to erupt from a single location, forming a cinder cone. This closely resembles what happens in Hawaii or Iceland.

Before the damming, the area likely looked much like the shores of Clear Lake look today, with stands of pine trees. However, as the lake filled, these trees got flooded and eventually died. Yet, the cold waters of the lake (35-43F) helped preserve the trees.

Today, you can row out into the lake and see the remains of these trees still standing. They have degraded some, but when you look down into the clear, cold waters and see these trees that perished almost 3,000 years ago, you can’t help of be amazed.

A view of a drowned tree at Clear Lake in Oregon. Credit: Erik Klemetti

It is likely that Native Americans who lived in the area at the time saw this eruption and its results. How they felt about lava blocking a river and creating the lake is anyone’s guess, but suddenly a new lake with fish can formed where before there was none.

In some ways, this shows how something as destructive as a volcanic eruption can be a net positive to the landscape … and to the people living off that land. We can continue to enjoy the results of those lava flows from millennia ago even when keeping in mind the volcanic potential of the Cascade Range.