Viking Warrior In Famous Grave Was A Woman

The grave, archaeologists believed, belonged to a high-ranking warrior. 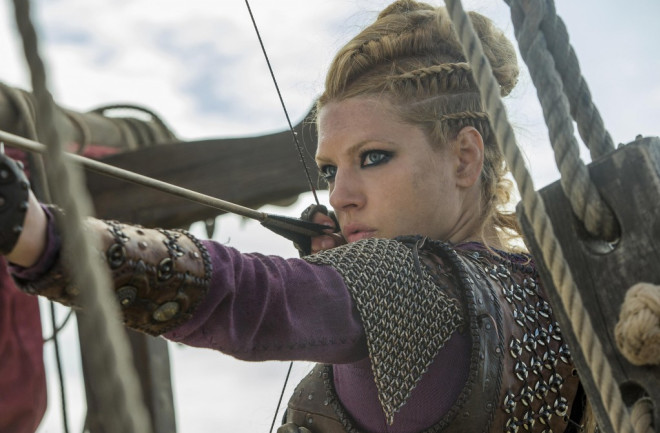 Fierce warrior Lagertha on the show "Vikings" is fictional, but a genetic study confirms the warrior buried in a Viking-era grave was a woman. (Credit History Channel)

This one goes out to all my fellow shieldmaidens: researchers have confirmed through ancient DNA testing that the warrior buried in a famous Viking grave was a woman.

Researchers have excavated hundreds of Viking-era graves at Birka, a UNESCO World Heritage Site in Sweden. One of the graves, originally excavated in the 1880s, was particularly noteworthy for both its position — on a prominent terrace adjacent to what had been a garrison — and for its grave goods, which included a variety of weapons, from a sword to armor-piercing arrows, and two horses.

The grave, archaeologists believed, belonged to a high-ranking warrior. Although the individual buried in the grave was assumed to be male based on the grave goods, some researchers argued that the skeleton belonged to a woman. Controversy and the usual academic kerfuffle ensued.

But thanks to ancient DNA analysis, researchers confirmed this week in the American Journal of Physical Anthropology that Bj 581, as the grave is formally designated, belongs a woman who was at least 30 years old when she died.

Sisterhood of the Traveling Lance

While other women of the the Viking era have been found buried with weaponry, none had a grave suggesting a status as high as Lady Bj 581. Among the grave goods, for example, was a game board and full set of game pieces; but we’re not talking Chutes and Ladders here. Researchers believe the game set indicates she was an officer and involved in tactics and strategy.

In addition to extracting and sequencing her genome, the researchers conducted a strontium isotope analysis on three of her teeth. This kind of testing can, like a chemical breadcumb trail, reveal where an individual had lived early in life. Although the results did not identify any specific geographic areas, the team believes that the woman was not born in the Birka area. (Genetically, she was most closely related to present-day populations in the British Isles and Scandinavia and, to a lesser extent, the eastern Baltic area.)

It’s not too surprising that a woman from somewhere else in northern Europe would end up at Birka; from the 8th through 10th centuries, the site was a flourishing trading center. Bj 581 itself dates from the mid-10th century.

They ain't playing Candyland with this game board and pieces. (Credit HBO)

I know, I know, I can hear objections being raised to the idea that Bj 581 is the grave of a Viking warrior woman. You wouldn’t be the first to fuss over this. As the authors behind today’s study point out, when women and weapons have turned up in other Viking-era graves, it’s been assumed that the weapons were symbolic, a family heirloom, perhaps, and that mention of lady-fighters in the sagas and some historical sources are all just flights of fancy.

The researchers note that Bj 581’s skeleton did not have any signs of trauma typically seen in someone who died in combat. But then again, of 49 confirmed males buried at Birka, only 2 did have signs of sharp force trauma. Back in the day, not every warrior died in battle. Disease, infection and a variety of other ailments were all ways to shuffle off this mortal coil without getting your ticket to Valhalla punched.

There are also no signs that there was ever another body buried in Bj 581, so skeptics who want to argue that she was buried with her man don’t have any evidence to back that up.

Can we be sure without a shadow of a doubt that the woman in Bj 581 was a battle-ready badass? No, we can’t. Just like we can’t be sure that all those Viking-era men buried with swords but no signs of trauma ever saw war. But thanks to today’s study (which is open access, so go nuts), we can be sure that the individual buried in Bj 581 with a load of warrior grave goods was a woman. And that alone is pretty cool.

Or, as the the authors close today’s study:

Then the high-born lady saw them play the wounding game, she resolved on a hard course and flung off her cloak; she took a naked sword and fought for her kinsmen’s lives, she was handy at fighting, wherever she aimed her blows. The Greenlandic Poem of Atli (st. 49) (Larrington, 1996)

Yes, I know JRR Tolkien had Saxons more than Vikings in mind when creating the people of Rohan, but that's not going to stop me from using this! (Credit New Line Cinema)
1 free article left
Want More? Get unlimited access for as low as $1.99/month
Subscribe