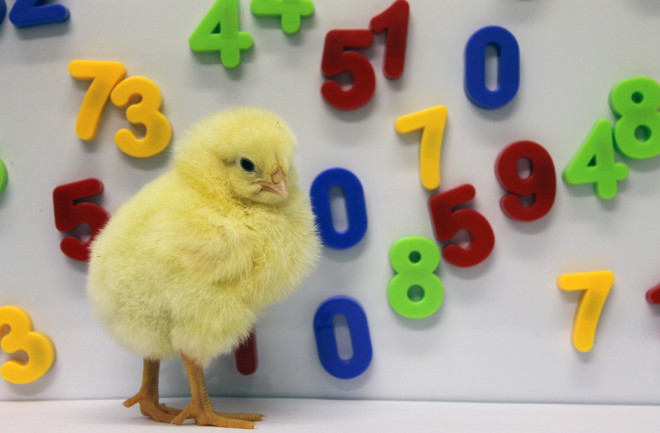 This so-called mental number line is a trait you share not only with most of your fellow English speakers, but also with the majority of people on earth. And now, for the first time, a team of researchers has found direct evidence of a mental number line in a non-human species: chickens.

Previous research has found that seven-month-old infants prefer to count left-to-right, regardless of where they’re born. That preference can change as children gain experience that rewards right-to-left counting – for example, learning to read in a right-to-left writing system such as Arabic.

But the fact that we’re all born with a left-to-right counting preference hints that this trait may date further back in our evolutionary past. Other experiments seem to confirm this idea. For example, experiments have found that monkeys and birds tend to look for smaller quantities on their left-hand sides, and higher ones toward their right.

But while there’s no doubt that we share this tendency with these animals, some experts think it may have less to do with numbers, and more to do with visual attention in general. According to this explanation, early vertebrates’ brains evolved to process visual stimuli more heavily in the right hemisphere than in the left.

Since the left visual field feeds into the brain’s right cortex, it may simply feel natural for animals – humans included – to focus on the left visual field first, regardless of what’s there. A true number-by-number mental number line, then, would be a trait unique to humans. But a team led by Rosa Rugani, a psychology researcher at the University of Padova in Italy, suspected there might be more to this story. If human infants had mental number lines, they thought, then why not the babies of other species?

The investigators gathered chicks that were just three days old, and taught each of the chicks to find a treat behind a small sign marked with five dots. Once the chicks had learned this, the researchers moved each chick to an enclosure with two signs each showing an identical number of dots – say, eight – and separated to the two sides of the enclosure.

Still, this wasn’t yet direct evidence that the chicks were actually counting the dots: they could be choosing based on the overall size of the dot image. To test how closely the chicks were counting, the researchers created a new set of signs with all the dots grouped into areas of identical size.

And the chicks’ preferences scarcely changed. This seems to indicate that the chicks were actually counting the dots, and that they thought of lower numbers as being to the left and higher numbers to the right. The results appear in this month’s issue of the journal Science.

The results indicate that the tendency to map numbers left-to-right originated millions of years before the concept of numbers existed at all. Other experiments on humans have found that people who suffer right-hemisphere damage have trouble saying whether the number six, for example, is lower or higher than seven – which may mean that counting is a much more primitive, hardwired process than language is.

Rugani aims to further explore the evolutionary roots of humans’ number sense in the future. She wonders how closely the concepts of “less” and “more” may correlate with other primitive concepts like “worse” and “better,” for instance. She’s also curious whether mental number lines have to run horizontally, or whether some humans or other animals might have vertical ones.

These aren’t just abstract questions. Their answers may someday help people who suffer from brain damage or from degenerative diseases like Alzheimer’s. If we can understand how certain types of brain wiring give rise to simple processes like counting, doctors may be able to diagnose and treat those problems far more precisely. And when it comes to that kind of understanding, just about all of us can agree that more is better.