Video: How Male Frogs Kick up a Frog Froth to Protect Their Young 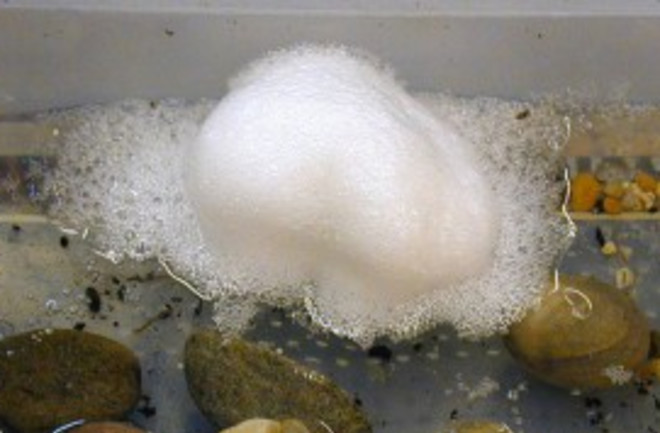 Human parents can get into a huge lather about keeping their kids safe. So why should some species of frog be any different? Male Tungara frogs (Engystomops pustulous) will huff and puff and literally kick up a huge clump of foam that serves as a nest to shelter his mate's eggs. The floating foam nests sound flimsy, but they're actually incredibly durable--surviving the sun, high temperatures, infections, and parasites for four whole days until the eggs housed inside mature into tadpoles. While scientists already knew of these foam nests, they didn't know quite how the frogs made them. Now research (pdf) published in the Royal Society's journal Biology Letters provides some answers. New footage filmed of an amorous pair of Tungara frogs foaming up a nest in the West Indies shows a carefully calibrated approach to nest-building that's part yoga, part physics. In the first stage of foam-making, the male hops onto the female's back and begins to collect a foam-precursor fluid. Then he begins kicking his legs in short bursts, mixing air bubbles into the fluid just like an eggbeater does. In the next stage, he carefully pushes in eggs from the female underneath him into the center of the foam before eventually slowing down and stopping. Scientists are hopeful that understanding the nest building process would help us create a similar "bio-foam" in the laboratory. Study coauthor Malcolm Kennedy, an evolutionary biologist from University of Glasgow, told the BBC:

"This material is resistant to bacterial and microbial damage -- and if you could make a spray can that could produce this, it could potentially be used on burn victims, for example, because it would prevent them from infection, but it doesn't damage cells."