Vertical Farming in the Windy City 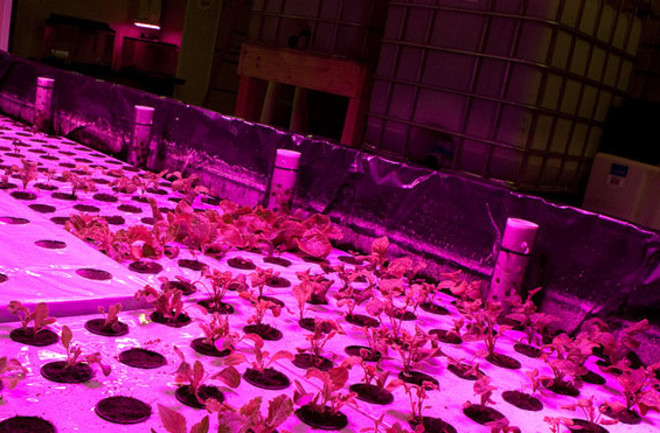 Lettuce grown outdoors at The Plant will be sold locally this fall. | Courtesy Rachel Swenie

In Chicago’s meatpacking district, developer John Edel hopes to reinvent the urban food supply with a $4 million, four-story indoor produce and fish farm called The Plant. Edel and his colleagues have already planted 3,000 square feet of hydroponically grown lettuce and other greens and installed 1,400 tilapia in tanks.

The fish farm and gardens are connected by a 9,000-gallon water circulation system: Wastewater from the tilapia tanks, rich in nitrogen-based nutrients, flows into the hydroponic beds, where it irrigates and fertilizes the lettuce. The crop roots then filter that water before it returns to the fish. Edel and student collaborators at the Illinois Institute of Technology are also building a custom-designed digester that will turn the project’s leftover vegetable and fish waste into fertilizer and biogas to power a heating, cooling, and 280-kilowatt electrical system. The Plant will offer its first bounty for sale this fall, supplying greens, mushrooms, and tilapia to farmers’ markets and local restaurants.

The Plant is part of a growing push to bring farms into metropolitan areas. Small-scale, multilevel farms have sprung up in Britain and Wisconsin, and an organization called Growing Power hopes to break ground on a five-story project in Milwaukee within 18 months. Such efforts make fresh food more accessible to inner-city residents and could help to reduce the cost and energy of shipping produce. According to an analysis from Iowa State University, conventional produce travels about 1,500 miles on average to its destination, causing the release of 5 to 17 times more carbon dioxide than food from regional and local farms.