Iceland is one of the few places on Earth where you can walk along a mid-ocean ridge. 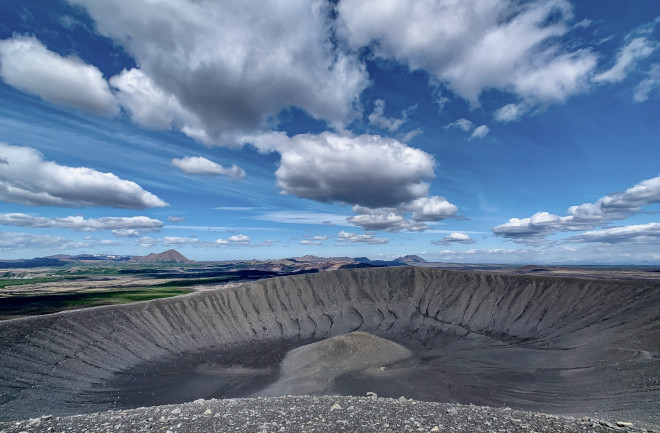 A view into Hverfjall, a tephra cone volcano in Iceland that erupted explosively about 2,500 years ago. (Source: © Tom Yulsman)

Wrapping around the entire globe, Earth's most extensive mountain range stretches for more than 40,000 miles.

Almost entirely submerged beneath the sea, it's known as the Mid-Ocean Ridge. It is, in essence, a giant seam bordered by mountains where tectonic plates are pulling apart. New oceanic crust forms here through volcanic activity.

Iceland is one of the few places where the ridge rises above the surface, making it possible to see the spectacular impact of geologic processes that mostly occur at the bottom of the sea.

Located along the Mid-Atlantic Ridge portion of the globe-girdling mountain range, Iceland sits on the boundary between the Eurasian and North American tectonic plates. Here, the plates are pulling apart in an east-west direction at a rate akin to how fast your fingernails grow. Molten rock wells up and fills in the gap, causing the creation of new crust — and also resulting in one of the most volcanically active regions on Earth.

As my colleague at Discover, Erik Klemetti, writes in a recent post at his Rocky Planet blog, a new eruption might be in the offing in Southern Iceland, although that's a bit uncertain right now.

I was lucky enough to visit Iceland last summer. While there, I took the photo above of Hverfjall, a tephra cone volcano in the north that erupted about 2,500 years ago. The crater has steep, circular walls in part because the volcano erupted near a shallow lake.

The Landsat 8 satellite captured this image of Iceland’s Northern Volcanic Zone on July 26, 2017. Hverfjall is visible to the right of Mývatn, a beautiful shallow lake that hosts a great diversity of life. (Source: NASA Earth Observatory)

You can see that lake, as well as Hverfjall, in the view above from space, recently published by NASA's Earth Observatory. For a high-resolution version showing a broader view of this northern portion of Iceland, click here. Click again to explore close-up views.

Mývatn, the lake in question, gets it name from vast numbers of midges that breed there. The Mývatn area also hosts "one of the world's richest populations of breeding aquatic birds," according UNESCO. "In all, 115 species of birds have been recorded in the area, including 28 species of ducks."

A hiking trail through volcanic formations on west side of the Mývatn. (Source: © Tom Yulsman)

The lovely waters of Mývatn are visible in the distance in this photo shot from a hiking trail that wends its way through volcanic formations on east side of the lake.

Mývatn and Hverfjall are located in Icelabnd's Northern Volcanic Zone. Here, the full rate of spreading between the North American and Eurasian plates is occurring, resulting in recurring episodes of rifting and volcanic eruptions.

In the southern part of Iceland, the Laki eruption of 1783 poured out more than 12 cubic kilometers of lava — "enough to pave the entire U.S. interstate freeway system to a depth of 10 meters," according to NOAA.

An estimated 80 million tons of sulfuric acid aerosol was released by the eruption — 80 times more than Mount St. Helens. Haze from the eruption ruined crops and killed most of the island's livestock, causing the death of more than 10,000 Icelanders, a quarter of the population at that time.

By blocking sunlight, the haze caused winter average temperature in the eastern United States to plunge nearly 5 degrees C below the long-term average. For the Northern Hemisphere as a whole, the drop amounted to about 1 degree C. To put that in perspective, human activities have caused Earth's average temperature to rise by about the same amount.

Something like that could certainly happen again. But most of the time, eruptions are more benign.