Wildfire this year damaged dozens of the famous moai stone structures of Rapa Nui, which still hold mystery for anthropologists. 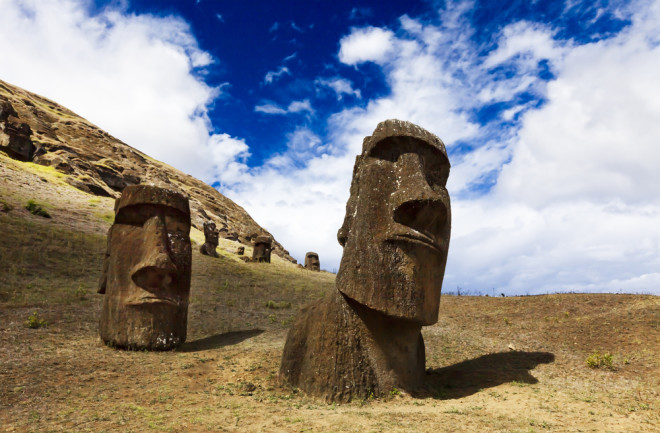 In early October, a fire spread across the remote Pacific island of Rapa Nui, known to many as Easter Island. The blaze was so intense that NASA satellites captured images of the charred land. After the flames subsided, photos from the island revealed the destruction. Many of the island’s famed statues were charred beyond repair.

Rapa Nui has long been famous for its 1,000-plus massive statues, called moai.  These large statues resemble heads and were carved from volcanic bedrock between A.D. 1250 and 1500. As many as 80 of them were damaged in the fire.

Scientists have been studying the moai for hundreds of years in order to learn more about the Polynesian settlers who came to the isolated island almost a millennium ago. For a time, archeologists thought the island’s inhabitants committed ecocide in order to transport the moai. Only in recent years have scientists learned more about these ancient artifacts and the resilient people who constructed them.

There are more than 1,000 moai on Rapa Nui. They are anthropomorphic statues and 300 have been placed on megalithic platforms called ahu. The statues were tributes to deified ancestors including former clan chiefs. Worshipping these statues was meant to bring a person fertility and prosperity.

Some of the moai are massive and weigh as much as 81 tons. About half of the moai were left in the quarry where they were carved and the other half were hauled up to 11 miles away.

Scholars have long wondered how the Rapanui people moved these massive stones. In the 1970s, one anthropologist theorized that the Rapanui depleted the ecosystem by cutting down the island’s small forest in order to create log rollers. The theory evolved into a dominant narrative that the Rapanui committed ecocide and found themselves on an uninhabitable island, ultimately turning on each other through tribal warfare.

Only in recent years have scholars been able to confront the inadequacies (and ethnocentrism) of the ecocide theory. This transpired after archeologists excavated palm nuts and subjected them to radiocarbon dating. They found the island’s forest wasn’t hacked down at once. Rather, it persisted until the mid 17th century.

Given that the settlers likely showed up around 1250, scholars now think the forest erosion was a slow process and not caused by a flurry of felling trees in order to create log rollers. In fact, the heft of the moai suggests to researchers that earlier scholars got it all wrong. The Rapanui were cooperative, not combative people.

Scholars who thought the Rapanui chopped down their only forest assumed the statues were moved by log rollers. Workers supposedly heaved the moai onto the logs and rolled them across the island to their final resting spots.

Yet this log theory ignored the oral history of the Rapanui people who recalled the “walking statues.” A 2013 study in the Journal of Archeological Science tested the idea that the moai were transported upwards through a rocking motion that made it seem as though they were walking.

In the study, scientists created a 4.8-ton replica of a moai. They tied ropes around the top and gave the ends to researchers. By pulling on the ropes, the researchers created a momentum that allowed the statue to rock back and forth, and in doing so, inch forward.

The authors concluded there was merit to the Rapanui legend that the statues walked into their positions. It also helped explain why some statues seemed like they were abandoned sideways by the roadside — perhaps they had fallen and they couldn’t get up.

The theory of the walking moai is one way scientists have unraveled the assumption the Rapanui were warring people who turned on each other after desecrating their own habitat. Scientists have also realized the Rapanui people survived on an inhospitable island for centuries, which means they had to work together to endure an island with such limited resources.

Measuring in at just 63 square miles, Rapa Nui is a remote island in the eastern Pacific Ocean, positioned more than 2,200 miles off the coast of Chile. Its closest neighbor, Pitcairn Island, is about 1,200 miles away. Early settlers at Rapa Nui found an inhospitable island. It had no permanent freshwater sources, and as one scholar put it, a “limited roster” of flora and fauna. It’s also in a subtropical climate so fruit-bearing trees don’t grow in abundance.

The Rapanui adapted. Archeologists have found remnants of their houses, ovens, water storage jugs and walled gardens. The first European visitors came in 1722 and were amazed at the sparse island inhabited by thousands of people.

Decades passed before Europeans began consistently visiting the island in the 1770s. And then a century’s worth of exposure to European diseases dwindled the population down to about 100 people. The Rapanui lost their independence to Chile in 1888.

The island’s population has been able to rebuild and now claims more than 6,600 residents. But they have a new challenge to face together on their small island: the influx of tourists who want to see the famed moai, with approximately 100,000 annual visitors prior to the pandemic.