Unintended Consequences: The Sinister Side of Species Protection 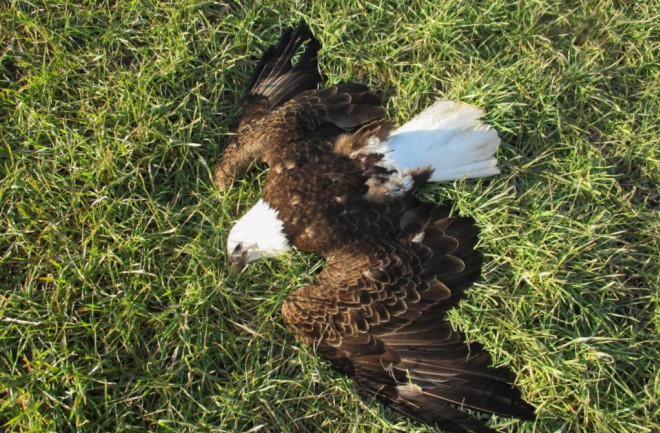 One of 13 bald eagles found dead on a farm in Maryland. (Credit: Maryland Natural Resources Police) There's something dark at work when it comes to certain human-animal interactions. A recent report from the Ecological Society of America admits that calling attention to plants and animals in need of special protections can actually result in “perverse consequences,” ultimately putting some species in harm's way—even in the face of stiff penalties. Killing a bald eagle is a federal offense punishable by up to one year in prison and a $100,000 fine. “A subsequent conviction under the Bald and Golden Eagles Act, raises the maximum penalty up to two years in prison and a $250,000 fine,” says Neil Mendelsohn, assistant special agent in charge at the Northeast Regional Office of the U.S. Fish and Wildlife Service. He's currently investigating the mysterious deaths of 13 bald eagles discovered in Federalsburg, Maryland in late February. The reward for information now stands at $25,000. Necropsies show the birds didn't die of disease or natural causes, and officials are keeping mum so far—other than to say human intervention is suspected. Why do some people target and kill protected animals? It's a question scientists have asked before.

It's nearly that time of year when myriad turtle varieties—some officially endangered, some threatened, and some perilously close to such future designations—take step after painstaking step to cross busy roads on their way to their preferred nesting and foraging sites. A turtle's journey across the asphalt is fraught enough on its own, but there is a segment of the human population that makes simple survival even more difficult. Multiple studies report startlingly high percentages of motorists worldwide who literally drive out of their way to crush animals as they try to cross. For instance, as an undergrad at Clemson University, Nathan Weaver placed a rubber decoy turtle in different spots along a busy roadway and watched the drama unfold from a safe, hidden vantage point.

A snapping turtle inches toward a potentially perilous crossing. (Credit: Tony Campbell/Shutterstock) “We knew that some people hit [turtles] on purpose, but we were really surprised with how many people did,” says Weaver, now a forester for Georgia's Department of Natural Resources. More than 3 percent of vehicles struck the decoy—and, of that segment, 70 percent did so deliberately. “If they were [within 25 yards of the turtle decoy] and they had to move over to hit it, we called that deliberate,” Weaver explains. As it turns out, the actions of a few bad apples can make a big dent in turtle populations. More than 60 percent of those road-crossing turtles happen to be female. Taking them out of circulation skews male-to-female population ratios and reduces the numbers of healthy clutches for future generations.

Robert Gifford, managing editor of The Journal of Environmental Psychology and a professor of psychology and environmental studies at the University of Victoria, attributes some of this bad behavior to the 1960s concept of “reactance.” “It's basically the idea that 'I don't want regulations to take away my freedom, so I will actually go in the opposite direction to show you—the government or regulator—that I am not happy about you taking away my freedom,'” says Gifford. He continues, “'You know, you can't make me accept that this turtle is endangered ... I don't want you to take away my freedom to squash turtles if I want to. So, I'm going to squash two of them just to show you that I don't want to be controlled.' That's called 'reactance.'” Although he believes drivers intentionally killing turtles is rare, Hal Herzog, author of

Some We Love, Some We Hate, Some We Eat: Why It's So Hard to Think Straight About Animals

and a professor of psychology at Western Carolina University, suspects, “It's usually males trying to be macho. It can be part of a culture.”

A water moccasin slithering on a Florida roadway. (Credit: Tony Campbell/Shutterstock) Herzog is quick to add that intentionally killing threatened, endangered, or protected animals doesn't always come from a place of malice or machismo: “It is a pretty complicated issue, like most things with animals. There's not just one reason why people would kill an endangered animal. There's a slew of reasons.” Among them? Differences in cultural perceptions and traditions. “The classic example of that is whales,” says Herzog. “We see whales as these magnificent creatures with large brains that have incredibly complicated communication systems and social lives ... But, in Japan, they're seen as being meat ... You see whale meat in the store, right next to pork and beef.” Because the Christian tradition has long advanced the idea of mankind having “dominion” over the natural world, Gifford notes, this may also influence culture and people's behavior toward animals—even protected ones. He says, “Unfortunately, in the first chapter of Genesis, is the 'dominion' quote. . . it [suggests] we were put here to subdue all other animals on the planet, to have dominion over the birds, the bees, and everything.”

Couple that “dominion” position with a perceived conflict of interest, and you've got a recipe for killing. Melissa Amarello, director of education for the Advocates for Snake Preservation, points to popular “rattlesnake roundups”—where thousands of snakes are collected in the wild and killed—which routinely take place in the South and southeastern U.S. Event organizers claim the roundups keep snake populations in check, help prevent cattle deaths, keep the public safe, and cut down on the number of rattlesnake-related police calls. “None of those things are true,”says Amarello. However, she adds, “At this point, [roundups are] a family event ... You can pay extra and skin your own snake after it has been decapitated. That's something that they encourage kids to do. It's very much part of their culture, and it has been normalized.” Although eastern diamondback rattlesnakes are potential candidates for protection, they have yet to be listed under the Endangered Species Act. Meanwhile, roundups in Alabama and Georgia specifically target eastern diamondbacks, contributing further to their decline.

As a property rights issue, some private land owners strike a preemptive blow against endangered species occurring on their property by killing the animals themselves or removing potential habitat—before appropriate regulatory agencies find out about the presence of the endangered animals or their habitat. This phenomenon is known in conservation circles as the "3S's" or “shoot, shovel, and shut up.” Along these lines, some North Carolina landowners actually destroyed habitat on their properties that might have been attractive to the endangered red-cockaded woodpecker, so that they would not be financially penalized by restrictions on the use of their property. Similarly, in 2007, two men from a Massachusetts-based trout hatchery were convicted for illegally killing ospreys, herons and at least one bald eagle. “[Their] motivation stemmed from a desire to protect hatchery fish from being preyed on by native birds. . . . [They] routinely shot birds in the vicinity of the hatchery instead of employing alternative legal methods to exclude the birds from the area,” says Mendelsohn. Whether it's psychological, cultural or to avoid regulations, the reasons people kill protected species are vast a varied. But maybe the answer is far more simple: people like it. At the time of his study in 2012, Clemson told Weaver he was not allowed to contact or confront drivers who intentionally hit the turtle decoy, and he could only speculate on their motivations. “I would say it's probably a power thing. Maybe a need to feel bigger than something else. And, as sick as it might sound, I think some people just enjoy it,” he says.