Ulawun in Papua New Guinea Has a Towering New Eruption

It's the second eruption this week. 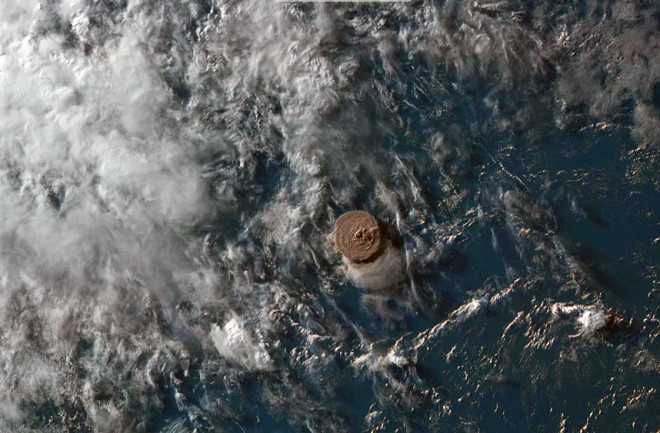 The growing ash plume from Ulawun in PNG, captured just after the eruption started on June 26, 2019. (Credit: Himawari-8, JMA)

For the second time in a week, a blast from a new eruption been flung over 10 kilometers into the sky. However, unlike Raikoke in Russia, this one came from a volcano that has a well-known history of big explosions.

Ulawun, on the island of New Britain in Papua New Guinea, unleashed an eruption this morning (local time) that reached at least 13.5 kilometers (45,000 feet) high according to the Darwin Volcanic Ash Advisory Center. Himawari-8 captured a great sequence showing the growing, tan ash plume from Ulawun (below). Ash drifting out over the Pacific has now reached 19 kilometers (63,000 feet) but at least for now, the eruption looks to have ceased.

Some of pictures that have been floating around on social media (although not confirmed to be authentic) suggest that the eruption produced a tall lava fountain. This would be reasonable for Ulawun as it tends to erupt basalt to andesite lava (think something like Italy’s Etna).

Hints of a potential new eruption had been seen last weekend, when the Rabaul Volcano Observatory reported an increase in earthquakes at the volcano. This could have been a precursor to the new eruption caused by magma rising underneath Ulawun.

The new major blast prompted evacuations for people living around the perennially-restless volcano. Although only a few thousand people live within 30 kilometers (~19 miles) of Ulawun, ash from this eruption might travel much further, impacting the over 60,000 that live within 100 kilometers (62 miles). Some flights have already been cancelled due to the eruption.

Ulawun has had off-and-on small eruptions for the past few decades but it has been 19 years since the last major explosions at the volcano. The VEI 4 event in September 2000 also generated a 12-15 kilometer (40-50,000 feet) ash plume. This tendency to produce major explosive eruptions prompted the volcanologist community to include it as one of the “Decade Volcanoes“, a list of volcanoes that pose significant danger to people living near it.

Needless to say (but I’ll say it anyway), these two eruptions over the past week are not connected beyond being on the same planet. The fact that they happened around the same time is just the product of a world with statistically-random eruptions.