Turtles use the Earth’s magnetic field as a global GPS 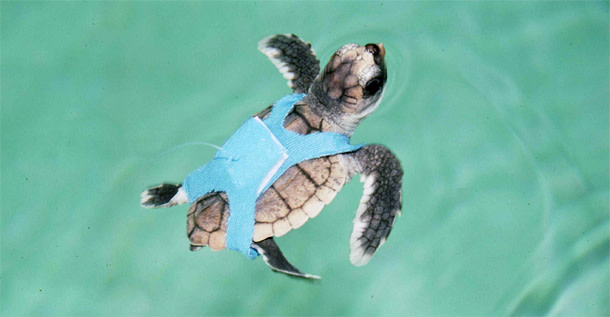 In 1996, a loggerhead turtle called Adelita swam across 9,000 miles from Mexico to Japan, crossing the entire Pacific on her way. Wallace J. Nichols tracked this epic journey with a satellite tag. But Adelita herself had no such technology at her disposal. How did she steer a route across two oceans to find her destination? Nathan Putman has the answer. By testing hatchling turtles in a special tank, he has found that they can use the Earth’s magnetic field as their own Global Positioning System (GPS). By sensing the field, they can work out both their latitude and longitude and head in the right direction. Putman works in the lab of Ken Lohmann, who has been studying the magnetic abilities of loggerheads for over 20 years. In his lab at the University of North Carolina, he places hatchlings in a large water tank surrounded by a large grid of electromagnetic coils. In 1991, he found that the babies started swimming in the opposite direction if he used the coils to reverse the direction of the magnetic field around them. They could use the field as a compass to get their bearing. Later, Lohmann showed that they can also use the magnetic field to work out their position. For them, this is literally a matter of life or death. Hatchlings born off the coast of Florida spend their early lives in the North Atlantic gyre, a warm current that circles between North America and Africa. If they’re swept towards the cold waters outside the gyre, they die. Their magnetic sense keeps them safe. Using his coil-surrounded tank, Lohmann could mimic the magnetic field at different parts of the Earth’s surface. If he simulated the field at the northern edge of the gyre, the hatchlings swam southwards. If he simulated the field at the gyre’s southern edge, the turtles swam west-northwest. These experiments showed that the turtles can use their magnetic sense to work out their latitude – their position on a north-south axis. Now, Putman has shown that they can also determine their longitude – their position on an east-west axis. He tweaked his magnetic tanks to simulate the fields in two positions with the same latitude at opposite ends of the Atlantic. If the field simulated the west Atlantic near Puerto Rico, the turtles swam northeast. If the field matched that on the east Atlantic near the Cape Verde Islands, the turtles swam southwest. In the wild, both headings would keep them within the safe, warm embrace of the North Atlantic gyre.

Before now, we knew that that several animal migrants, from loggerheads to reed warblers to sparrows had some way of working out longitude, but no one knew how. By keeping the turtles in the same conditions, with only the magnetic fields around them changing, Putman clearly showed that they can use these fields to find their way. In the wild, they might well also use other landmarks like the position of the sea, sun and stars. Human sailors also worked out how to measure longitude, as described in Dava Sobel’s bestselling book. They relied on an accurate clock created by the Englishman John Harrison, which allowed them to compare the time of day at a given location with that at a distant place. Every hour of difference represented fifteen degrees of longitude. But we know that turtles don’t use a similar time-based method because Putman didn’t test them under different conditions of light or dark. His hatchlings had no way of telling what time it was. Indeed, to use a time-based map in the wild, the turtles would need to have an internal clock that stayed set at Florida time for their entire 3-15 year migration. Instead, Putman thinks that the turtles work out their position using two features of the Earth’s magnetic field that change over its surface. They can sense the field’s inclination, or the angle at which it dips towards the surface. At the poles, this angle is roughly 90 degrees and at the equator, it’s roughly zero degrees. They can also sense its intensity, which is strongest near the poles and weakest near the Equator. Different parts of the world have unique combinations of these two variables. Neither corresponds directly to either latitude or longitude, but together, they provide a “magnetic signature” that tells the turtle where it is. Scientists often talk about a magnetic “map”, but the animals aren’t necessarily using any sort of mental chart. As with all research in magnetic senses, it’s very hard to work out what the animal is actually sensing or thinking. But that can be a bonus. “It might be good because I don't have any preconceived notions about how animals like turtles use magnetic information,” says Putman.” I can let the turtles tell me what they can respond to without imposing any personal expectations on them!” We do, however, know that they have their super-sense from birth. Putman’s turtles had never been in the ocean before and their magnetic sense doesn’t depend on experience. Indeed, Lohmann’s previous experiments showed that even newly hatched loggerheads can react correctly to different magnetic fields. These studies weren’t easy. Putman says, “The loggerheads we use are a threatened species, so we have to be extra careful with all of them. We use newly hatched turtles for these studies, so we work with them and release them at night. We try to design really short experiments and house them for no more than a couple of hours before letting them go. [It] makes for rushed data collection!” For Lohmann, these tribulations are worth it. After spending graduate school on spiny lobsters and sea slugs (two animals that also have magnetic senses), he had an opportunity to study young loggerheads. “I thought it was worth a try to see if turtles could detect magnetic fields. I figured that after the two-year project was over, I would get back to the invertebrates,” says Lohmann. “That was 23 years ago, and I'm still studying turtles. Each time we think we have it all figured out, the turtles show us that we have missed something important.” 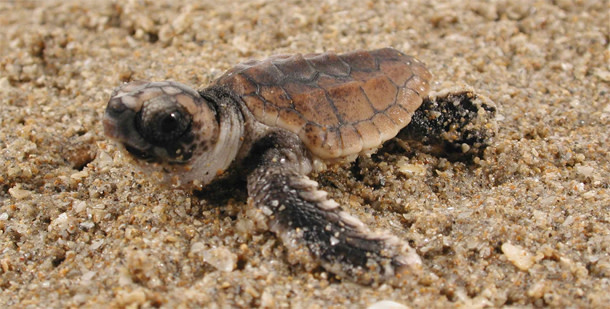