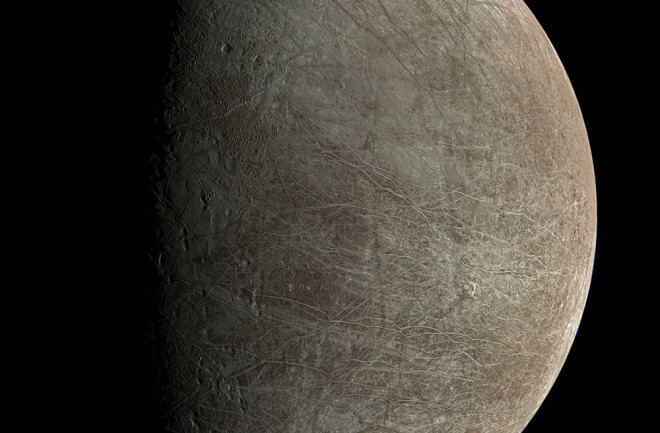 Water! Earth has a bounty of it. Many of us don't even think about how weird water is as a substance because it is so commonplace on the planet. One of the strangest properties of water is how it expands when it freezes, rather than shrink like a vast majority of every other substance. There are consequences to this weird increase in volume when water turns to ice. On Earth, that conversion can turn solid rock into debris as water expands and contracts when it freezes and thaws. Water is a powerful agent of change during its change from liquid to solid.

Thing is, water on Earth is a real anomaly. No where else is so much liquid water found on the surface. If you look at the rest of the solar system, water tends to be found in its solid state at the surface of asteroids, comets or outer planet's moons. Some of those moons, like Europa, Callisto and Ganymede around Jupiter, Enceladus around Saturn and Triton around Uranus and even dwarf planets like Pluto are covered in ice layers that might be hundreds of miles thick.

Ice as Rock, Water as Lava

Temperature within these objects goes up as you head deeper and as pressure increases, the melting point of water decreases. Add in any salts that might be part of this ice to further drop the melting point, and you have a pretty good chance of pockets of liquid water in the ice layers or even deep oceans of liquid underneath the icy shells.

In many ways, on these icy moons, water and ice behave a lot like magma and rock do on Earth. Liquid water can be stored in the icy crust, but if pressure conditions are right, that liquid water will erupt onto the surface like lava might here. However, the causes of this cryovolcanism (ice volcanism) aren't entirely clear.

On Earth, magma rises through the crust and erupts because it is less dense than the solid rocks around it. Pressure builds because the volume of magma that rises into the crust and the continued buoyancy of that less dense, hot magma.

The same can't be said for most icy worlds. What do ice cubes and icebergs do? They float! That's because ice is less dense than liquid water (another weird quirk of water), so by that logic, liquid water shouldn't rise through solid ice crust. There should be no cryovolcanism.

Making Water Erupt (When It Shouldn't)

Yet, we see evidence for it on the surface of places like Europa. How might we actually get cryovolcanism to occur if we can't count on the natural buoyancy of the liquid that could erupt? Some new research by Elodie Lesage and others in the Planetary Science Journal suggests it might be ice's handy volume change that could be the key.

They modelled how a body of liquid water in an icy crust such as is found on Europa would respond to freezing. What they found is that in the right conditions, bodies of liquid water will become pressurized as turns to ice along its edges. As that ice forms, it takes up more room than the liquid water that was once there so the remaining liquid water has less room ... thus adding pressure.

It turns out that you need to be relatively shallow in the icy crust for this to work. As we know from glaciers and ice sheets on Earth, under pressure ice can flow -- that is, it can deform when put under stress. So, if the liquid water body is deep in the Europan ice crust, the ice around it will just deform, giving the liquid water more space and thus it won't pressurize.

However, just like rock on Earth, the top layer of ice (down to 2-5 miles/4-8 kilometres) is much more brittle. So, it doesn't deform to take off the volume change, leading to pressure. Lesage and her colleagues found that saucer-shaped shallow bodies of liquid water are the best for creating the pressurised situation that would lead to cryovolcanism.

So, that's to all of water's quirks like it's expansion when it turns to ice, the ability for ice to deform and its ability to stay liquid at colder temperatures thanks to pressure and salts, we get the right conditions for volcanoes that erupt liquid water onto the surface of these moons. Who knows, maybe these briny pools of water betray vast interconnected networks of liquid water that feed from the layer of water hundreds of miles below ... and that might just be the place where life is lurking in the solar system.