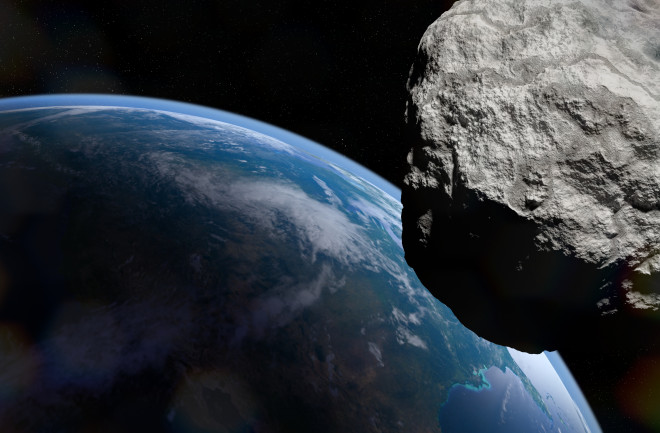 In the early morning of Jun. 30, 1908, a massive explosion flattened entire forests in a remote region of Eastern Siberia along the Tunguska River. Curiously, the explosion left no crater, creating a mystery that has puzzled scientists ever since — what could have caused such a huge blast without leaving any remnants of itself?

Now Daniil Khrennikov at the Siberian Federal University in Russia and colleagues have published a new model of the incident that may finally resolve the mystery. Khrennikov and co say the explosion was caused by an asteroid that grazed the Earth, entering the atmosphere at a shallow angle and then passing out again into space.

“We argue that the Tunguska event was caused by an iron asteroid body, which passed through the Earth’s atmosphere and continued to the near-solar orbit,” they say. If they are correct, the theory suggests Earth escaped an even larger disaster by a hair’s breadth.

First some background. Scientists have long speculated on the cause of the Tunguska impact. Perhaps the most widely discussed idea is that the explosion was the result of an icy body, such as a comet, entering the atmosphere. The ice then rapidly heated up and evaporated explosively in mid-air but without ever hitting the ground.

Such an explosion could have been powerful enough to flatten trees without leaving a crater. And it would have left little evidence other than vapor in the atmosphere.

But this theory does not fit some of the other evidence. There were just a handful of eyewitness reports of the event. These describe how “the sky split in two,” a huge explosion and widespread fire. But together, they provide evidence that the impactor traveled some 435 miles (700 km) through the atmosphere before the explosion that morning.

Friction with the atmosphere immediately heats these objects. But while iron vaporizes at around 5,432 degrees Fahrenheit (3000 degrees Centigrade), water vaporizes at only 212 degrees F (100 degrees C). So icy meteorites do not last long.

Indeed, Khrennikov and colleagues calculate that an icy body large enough to cause such a large explosion would have traveled no more than 186 miles (300 kilometers) through the atmosphere before vaporizing completely. That suggests the Tunguska meteorite could not have been made of ice.

Instead, Khrennikov and colleagues say a different scenario fits the facts. They say the explosion must have been caused by an iron meteorite about the size of a football stadium. This must have passed through the upper atmosphere, heated rapidly, and then passed out into the Solar System again. The shock wave from this trajectory was what flattened trees.

The shock wave would have caused an explosion of about the right magnitude, and any vaporized iron would have condensed into dust that would be indistinguishable on the ground. Crucially, this scenario would not have left any visible asteroid remnants.

It could also explain reports of dust in the upper atmosphere over Europe after the impact.

If Khrennikov and colleagues are correct, then Earth had a lucky near-miss that morning. A direct impact with a 656 foot-wide (200 meter-wide) asteroid would have devastated Siberia, leaving a crater 2 miles (3 kilometers) wide. It would also have had catastrophic effects on the biosphere, perhaps ending modern civilization.

In the event, the Tunguska impact is thought to have killed perhaps three people because the region is so remote. It could clearly have been much worse.

Ref: Krennikov et al. 2020. On the possibility of through passage of asteroid bodies across the Earth’s atmosphere. arxiv.org/abs/2009.14234