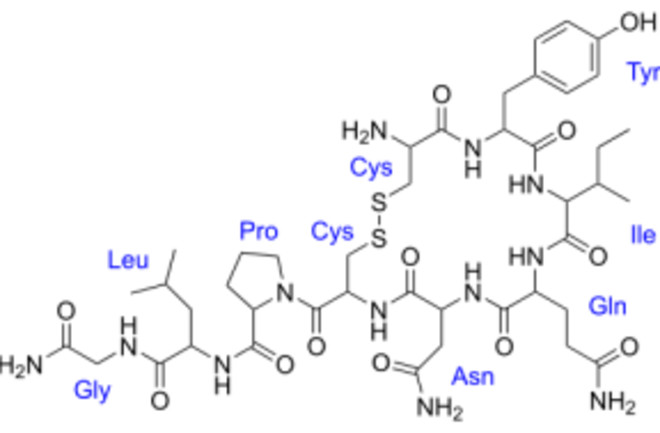 Oxytocin, the "moral molecule". Image by Calvero c/o Wikimedia Commons Oxytocin has perhaps the best reputation of any molecule on the planet. In a culture of chemophobia where any compound is fair game for attack, oxytocin has been heralded as "The Source of Love and Prosperity". If you listen to the tales, this "moral" molecule—the "trust hormone"—is the "most amazing molecule in the world," and is your one-stop shop for love and happiness. All you have to do is give someone a hug, and your brain will be flooded with the magic stuff. But as many (most notably Ed Yong) have pointed out, oxytocin isn't the sweet compound we're told it is. Sure, it has been associated with generosity, desire, and trust, but oxytocin has a dark side, too. It can increase envy and gloating, promote cliques, and even decrease cooperation. Now, a new study published today in PNAS adds to the molecule's moral ambiguity: huffing oxytocin can lead to dishonest behavior if that behavior is seen as being for "the greater good". Amsterdam scientists Shaul Shalvia and Carsten De Dreub tested the effects of oxytocin in an experimental game set up that allowed participants to lie to benefit the group. Players sniffed either a placebo or oxytocin, then played a game where teams of three anonymous participants were asked to predict a virtual coin toss. Afterward they were told to report whether they had guessed correctly, with correct guessing resulting in more cash for everyone. All of the participants cheated, saying that they guessed right more than they really did, but those that huffed the so-called moral molecule lied more and more quickly, saying they were right a statistically-impossible 80% of the time. However, when the experiment was repeated and the participants were told that only their own earnings would be increased, the oxytocin-smellers stopped lying more than the control group (though all of them still lied a little). When correct answers had no gains or resulted in lost money, the love drug group also didn't differ from the placebo-sniffers. These results suggested that oxytocin only increased dishonesty when it strongly benefitted the group. Instead of promoting ethical behavior in all circumstances, oxytocin shifts an individual's focus from self to group interests, whether or not that leads to higher overall immorality. "Oxytocin boosts group-serving behavior, rather than adherence to general moral codes," explain the authors. These results add to a growing body of literature that suggest oxytocin is a very complex chemical, and definitely not the saintly compound it's been purported to be. While in certain situations it can increase behaviors we think of as positive—bonding, cooperation and trust—it can also cause bad behaviors, from lying to prejudice. What ultimately matters, say the authors, "is whether such moral code-breaking serves those one cares about and the group one belongs to." "These findings highlight the role of bonding and cooperation in shaping dishonesty, providing insight into when and why collaboration turns into corruption." Citation: