Trillions of Insects Pass Over the U.K. Each Year 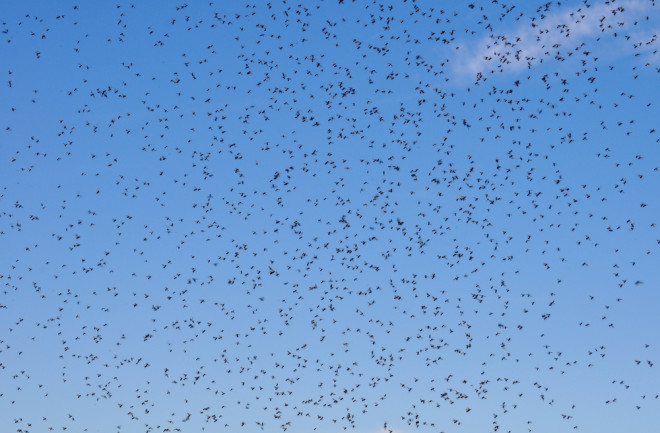 (Credit: Pablo Borca/Shutterstock) Look up into the clear blue sky in the spring or fall and you may not see them, but oh boy, are they there. Trillions of them, in fact, riding the high air currents to breeding grounds and back again. Insects ranging from microscopic to splatter-worthy fill the skies around the world each year as they migrate seasonally. A recent study from researchers in the United Kingdom found that in southern England alone, more than three trillion insects passed by each season. That's more than 400 times the global population of humans, and the researchers say that larger migrations likely take place all around the globe.

Researchers deployed a set of experiments at three locations in southern England during seasonal migrations from 2000 to 2009. They used special entomological radar devices to measure the passage of larger insects and relied on nets attached to blimps to sift out the smaller ones. Extrapolating from their data gave them a good idea of how many insects passed by in total. They looked only at insects flying above about 500 feet, which is where the majority of them stay to take advantage of prevailing winds. Putting their results together, they found that a mean of 3.37 trillion insects flew by each year, altogether comprising about 3,200 tons of biomass. That's equivalent to more than 600 elephants passing by overhead. That's a lot of bugs, and its well worth keeping in mind that this represents only a small fraction of the total number of insects that migrate each year around the world, largely unnoticed. In North America, monarch butterflies and other larger insects do attract some notice, but they're only part of the story. The researchers found that the vast majority of the insects on the move were tiny, weighing in at less than 10 milligrams. These minuscule migrators accounted for 99 percent of the insects by number and about 80 percent by mass. The researchers published their findings Thursday in Science. While our lives may seem to remain blissfully unaffected by the stream of insects above our heads, they actually account for a fairly significant amount of the total nutrients held in the ecosystem. Insects are especially rich in phosphorus and nitrogen, two elements essential for plant growth. When the insects move, they take these nutrients with them, and leave them behind when they die. The researchers say that the flows of insects seem to balance out in the long run, meaning that the system stays in equilibrium, but seasonal variations do occur. This could potentially affect ecosystems by increasing or decreasing the amount of beneficial nutrients they receive.