Today, the city of Angkor in Cambodia lies in ruins. But a thousand years ago, life there was very different. Then, Angkor was the heart of the Khmer empire and the largest preindustrial city of its day. It had a population of a million and an area that rivalled modern Los Angeles. And the key to this vast urban sprawl was water.

Radar images of the city by the Greater Angkor Project (GAP) revealed that Angkor was carefully designed to collect, store and distribute water. The “Hydraulic City” included miles of canals and dikes, irrigation channels for supplying crops, overflow channels to cope with a monsoon, massive storage areas (the largest of which was 16km^2 in area), and even a river diverted into a reservoir. Water was the city’s most precious resource, allowing it to thrive in the most unlikely of locations - the middle of a tropical forest.

But water, or rather a lack of it, may have been part of Angkor’s downfall. Brendan Buckley from Columbia University has reconstructed the climate of Angkor over the last 750 years, encompassing the final centuries of the Khmer Empire. The records show that Angkor was hit by two ferocious droughts in the mid-14^th and early-15^th century, each lasting for a few decades. Without a reliable source of water, the Hydraulic City’s aquatic network dried up. It may have been the coup de grace for a civilisation that was already in severe decline.

Many theories have been put forward for the downfall of Angkor, from war with the Siamese to erosion of the state religion. All of these ideas have proved difficult to back up, despite a century of research. Partly, that’s because the area hasn’t yielded much in the way of historical texts after the 13^th century. But texts aren’t the only way of studying Angkor’s history. Buckley’s reconstruction relies on a very different but more telling source of information – Fujian cypress trees. 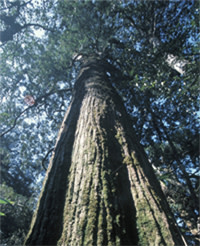 The trees in question grow in Bidoup Nui Ba National Park in neighbouring Vietnam. They’re a while away from Angkor in Cambodia but their location is far less important than their age. These trees have been growing for around a thousand years and they were around when Angkor was in its prime.

Throughout this time, the climate affected their speed of growth. During years of plenty, they expanded in width far more quickly than during unfavourable drought years. These trends are reflected in the size of their rings and Buckley sampled those by cutting cylindrical cores from the trees. These samples could be very accurately carbon-dated and they provide an invaluable record of the climate in Southeast Asia over at least the past 759 years.

In Buckley’s record, two droughts stood out in terms of their severity and length. The first one in the mid-1300s was the most sustained period of drought in the region over the last eight centuries. The second, while shorter, was often more severe, and included the driest year on record - 1403. The timings of these droughts coincided with periods when the surface temperature of the Pacific Ocean was unusually high. Buckley suggests that El Nino, a periodic warming of the Pacific, may have driven the two dry spells.

These disasters have been corroborated by other evidence. Records from Chao Phraya in Thailand also referenced severe droughts in the 14^th century, and the dry spells may even have extended into Sri Lanka, India and China.

During this time, the climate also reversed dramatically, with intense monsoons following the two droughts. These oscillating extremes of too little water following by far too much of it pounded the infrastructure of the Hydraulic City. Today’s ruins show signs of the failing structures that marked the city’s end days. Assaulted by sediment carried in floods, some canals suffered metres of erosion in a short space of time. One, which linked the capital with a nearby lake, is now filled with coarse sand and gravel, which suggests that it was rapidly filled by a single flood. That would have suddenly cut the city off from a major water source.

There are signs that the people of Angkor tried to cope with their fluctuating environment by modifying their network.However, that’s easier said than done with a criss-crossing infrastructure that spans a thousand square kilometres. The complicated lattice of waterways would have struggled to adapt.

Of course, a changing environment was far from the only reason behind the fall of Angkor. By the time the droughts kicked in, the city was already weakened by social, economic and political strife. Buckley simply thinks that the climate simply sealed the city’s demise. In fact, others have suggested that some force may have pushed the local people to move from inland agriculture to maritime trade. Buckley says that this transition coincides neatly with the aftermath of the first drought.