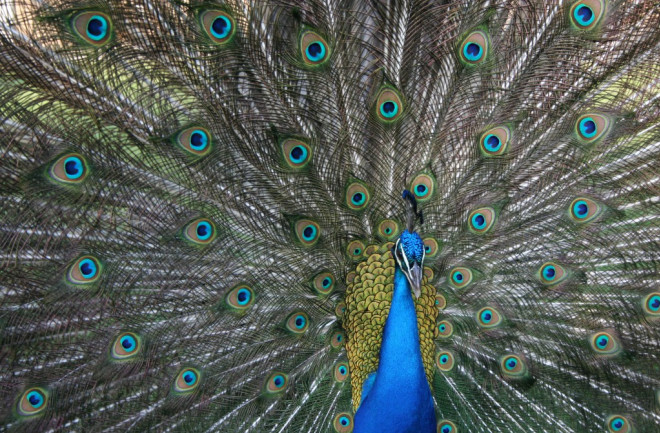 A peacock unfurls his magnificent train feathers. (Credit: Roslyn Dakin) When you see a peacock shake a train feather, you’re watching finely tuned natural engineering at work. When a peacock wants to woo a peahen, he unfurls his glorious, iridescent feathers and furiously vibrates them in what’s called a “train-rattling” display. The vibrations make the bird’s signature eyespots appear to float, motionless atop a swirling sea of wispy feather barbs. In his book on sexual selection, Darwin believed peacocks vibrated their colorful tails “merely to make noise,” because the motion could “hardly add to the beauty of their plumage.” This, coming from a man who said the sight of a peacock feather was enough to make him sick — peacocks, with their clumsy, massive feathers, didn’t fit nicely into Darwin’s “survival of the fittest” framework. They sort of forced him to develop the idea of sexual selection as an additional mechanism of evolution.

More than 150 years after Darwin’s heyday, scientists now have high-speed imaging, audio analyzers and scanning electron microscopes at their disposal. And in a new study, published Wednesday in the open-access journal PLOS ONE, scientists used these tools to analyze the biomechanics of the peacock tail wiggle. Their results suggest the bird's feather structure and tail-shaking behavior work in harmony to enhance the appearance of those signature spots.

In 2013, Roslyn Dakin, a zoologist at the University of British Columbia, proved the hue and iridescence of a peacock’s blue-green eyespots overwhelmingly influences mating success. When she concealed those spots, a male's chances of wooing a peahen dropped to zero. However, her study didn't address why peacocks shake their feathers. “I’ve been interested in the motions that happen during the display for quite some time,” says Dakin. “So I started taking high-speed videos of some of the displays, but we didn’t pursue that any further at the time.” Then, Dakin met Suzanne Amador Kane, who’s a biological physicist at Haverford College in Pennsylvania. They put together a cross-disciplinary team to analyze the biomechanics of peacock’s tail-rattling behavior. There’s a lot here for an engineering nerd to enjoy.

Dakin and Amador Kane collected high-speed video of 14 peacocks rattling their tails, and analyzed individual feathers in the lab. They found that peacocks brush their tail feathers against their ornamental plumage at or near resonance — a vibratory sweet spot of 25.6 hertz. If you push a person on a swing, and time your pushes just right, they’ll keep swinging. Push infrequently or too often, and the ride isn’t as fun. That's a simple way to visualize resonance.

The rustling generates sound waves that are within a peahen’s audible range, which might be a factor in mate choice. Shaking their feathers at resonance maximizes the vibrational amplitude of a peacock's train, and it reduces the amount of power needed to produce the vibrations. “It’s really hard to shake something if it isn’t near the resonance,” says Amador Kane. The tail-rattling display is also counterintuitive. Peacock feathers can grow up to five feet in length, and you’d expect a bird with longer, heavier plumage to vibrate its feathers at a lower frequency — the difference between plucking strings on a violin and a bass. But peacocks with longer feathers shake them at higher frequencies, perhaps working harder in an attempt to show off their muscle power to picky peahens.

Scanning electron microscopy showed that the bird’s blue-green, iridescent spots are composed of tightly intermeshed feathers locked together with microhooks. This makes the eyespots denser than the wispy feather barbs surrounding it. The mass of the spots prevents the feather tips from wobbling too much. Together, these characteristics ensure the eyespots remain still while everything else rattles, producing a strangely hypnotic effect that peahens might be drawn to.

An up-close look at a peacock's iridescent eyespot. (Credit: Roslyn Dakin) “I think it’s really cool how it’s so much more captivating when you see it slowed down,” says Dakin. “It makes me wonder how it relates to the biology of the birds that are watching these things.” Peafowl, after all, see the world far differently than humans. They can make finer color discriminations than humans can, thanks to four — we have three — types of photoreceptors in their eyes. They also resolve flicker rates at much higher rates than we can. To a peahen, a movie in the theater might look like a person rapidly flipping through slides in a PowerPoint presentation, rather than fluid motion.

Ultimately, Dakin and Amador Kane’s study didn’t say what peahens are looking for in a mate. They simply spelled out how peacocks perform their train-rattling display. “It doesn’t answer many questions, but it does narrow down some of the next steps,” says Dakin. Are peahens listening for high-frequency vibrations that signal a male’s strength? How much energy does it take to vibrate those feathers? Are peahens transfixed by an illusion that results from shaking the feathers? Those are the questions Dakin and Amador Kane hope to pursue in the future to find out what, exactly, makes one male stand out from others. Knowing how it works at a mechanical level provides firm foundation to test hypotheses against. Even today, one of nature’s most recognizable courtship rituals still presents a formidable puzzle for scientists to solve, and it's bringing biologists and physicists together to approach these questions in new ways.